WILL WE EVER SEE THE GREEN CITY IN THE SUN?

River yields foetuses and corpses; 20 factories have been closed and a number of people arrested for discharging effluent and sewage

• Restoring the Nairobi River to pristine status appears to be a mirage.

• The clean-up of the river turns up corpses, aborted foetuses and medical waste. Then there's raw sewage and industrial effluent.Workers are given jabs against hepatitis B. 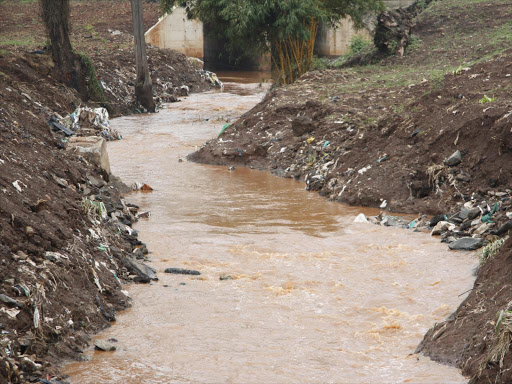 At first it was garbage, dead pigs, cats and dogs.

Then Nairobi River cleaners found human foetuses and other corpses.

So far, 14 bodies of adults, children and foetuses have been retrieved. Seven of the bodies were found near the Korokocho slums.

"When we found the first body, we reported at Kariobangi police station. The police said it cannot be taken to mortuary as it was too small," said Fredrick Okinda, head of Komb-Green Solutions who leads the clean-up in the area.

Once a body is found, cleaners hold a short ceremony and take it to the mortuary where it naturally remains unclaimed and is disposed of.

"Clinics in the area are the main sources of aborted foetuses," he said.

This is dangerous but cleaners continue working.

So far, 14 bodies of adults, children and foetuses have been retrieved. Seven of the bodies were found near the Korokocho slums.

"Poverty is what pushes us to clean the river. If we had money, we would not be doing this," cleaner Moses Muchina, 21, said.

It's better to clean the river and earn a little money instead of clashing with the police, he said.

"It is dangerous but we try our best. God has helped us," Lydia Wambui, 31, said.

The Nairobi River water, all the way from Lavington to Dandora, was clean and sparkling a few decades ago. It abounded with fish, water beetles, dragon flies and other creatures.

Today, the Nairobi River is dead, or nearly so. It doesn't support life, except for scum and maggots.

The problem is enormous and despite teams of workers, it isn't getting much better.

Officials tasked with transforming Nairobi City are finding it daunting.

They promised to enhance services and clean up the city and river in 30 days, make Nairobi the Green City in the Sun again. A fantasy.

Members were to launch a mortgage refinancing company and clear garbage in the 85 wards in a month.

The team of national and county leaders is co-chaired by Governor Mike Sonko and Tourism Cabinet Secretary Najib Balala. Some bosses had never visited slums and only saw them on television in their upmarket homes.

Confronted by the extent of river pollution, some were overwhelmed and discouraged.

In March, Environment CS Keriako Tobiko said lack of funds was putting the ambitious plan at risk since only Sh110 million had been allocated.

Supremacy battles and mistrust among agencies have also undermined the ambitious programme.

But on May 15, the team made another spirited clean-up effort at Korogocho market, one of the major river pollution points.

Poverty is what pushes us to clean the river. If we had money, we would not be doing this

Regeneration also focusses on housing and settlements, infrastructure and transport, energy, water resources, environment and solid waste, youth, women and persons living with a disability. Other sectors are land and ICT.

City Hall has allocated Sh330 million to the programme in a supplementary budget to fix Nairobi Eastlands roads and projects such as cleaning the Nairobi River.

Since the project started, several buildings on riparian land have been demolished. About 4,000 structures in slums have been targeted to demolition and 120,000 people are supposed to be relocated.

Industrial waste and untreated sewage from slums are still polluting the river.

Nema has closed more than 20 factories in Industrial Area for discharging effluent. Closure is part of the 100-day countrywide rapid results initiative.

National Environment Management Authority director general Geoffrey Wahungu said the major problem is that sewer lines were built long ago when the population was about one million. Now it’s four million.

On May 15, City Hall and Nema officials confronted the reality of the river.

They found a fresh grave of two children in Korogocho just beside the water. Cleaners had discovered them.

There were four more graves next to the river.

"We buried twins in one grave four days ago. So far, we have found six children dumped in the river," Moses Muchina said.

He leads the cleaning group of ore than 60 former delinquents and criminals mainly from Korogocho. It has 150,000 to 200,000 people living in 1.5 square kilometres.

At the Korogocho market, there’s a huge heap of organic waste that seeps into the river.

The Nairobi Water and Sewerage company is among firms discharging raw sewage.

The company has been served with a restoration order. A pre-treatment plant is said to be non-operational. “It should be made to work immediately,” Nema board chairman John Konchellah said.

"We have collected over 200 lorry-loads of garbage," she said. “Compost manure can be used to beautify Nairobi."

The CEC said Ngong and Mathare rivers will also be cleaned. The county has allocated Sh400 million in the next financial year for the job.

"We will not allow pollution of the Thwake dam project into which Nairobi River water will be discharged,” Kangongo said. The dam is being built at the border of Kitui and Makueni counties.

Nairobi River is a tributary of River Athi, the main source of water for the dam.

Kangongo warned garbage collectors not to pollute rivers. "Stern action will be taken against any private garbage collector found dumping solid waste next to a river or by the roadside,” she said.

Workers involved in the clean-up will be vaccinated against hepatitis B.

Wahungu also said several people have been arrested in connection with factory discharge.

Other problems are contradictory laws covering wetlands and riparian lands. It’s easy for developers to encroach and circumvent the laws that set different limits for construction near rivers.

The laws are to be rewritten.

Past clean-ups have failed.

The future of the Nairobi River is far from clear, like the water itself.

• March 2004, restoration of Nairobi Dam was launched by government, Unep, UN-Habitat. It was to be a source of healthy drinking water, habitat for birdlife, magnet for fishermen and picnickers.

•Today the dam is dry and structures are going up.

•More than 4,236 structures were to be demolished, both settlements and businesses in Kibera, Mukuru, Mathare, Kiambiu, Mukuru kwa Njenga and elsewhere.

•What remains is a section between Museum Hill and Globe Roundabout. The rest is a fetid eyesore.

• In 2009, former Environment Minister John Michuki was praised for reviving the river killed by human and industrial waste.

Nairobi River chokes on raw human and industrial waste, but all is not lost

Today, Nairobi is a dead river – or nearly so – just like the Dead Sea.
Counties
3 years ago

Youth hired to clean up Nairobi River in Dandora

Youth said they have encountered dumped bodies and syringes in cleaning the river.
InPictures
3 years ago
by GILBERT KOECH News Reporter
Big Read
31 May 2019 - 06:00