LUNGS HAVE HAD ENOUGH

12,000 residents claim they are falling sick, but steel factory managers say they have complied with all air quality control requirements

• The company disagrees and says that's just melting water vapour, generated when molten metal gets into contact with air at room temperature. 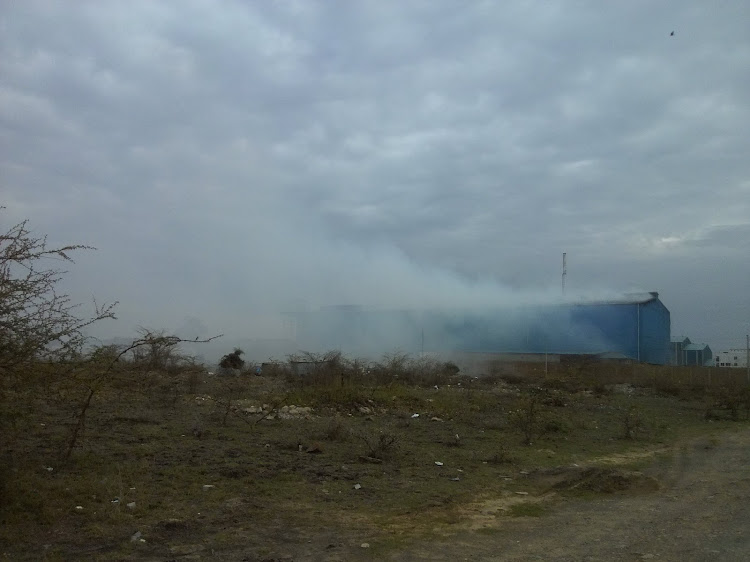 When a thick haze began to envelope Syokimau in early 2016, residents immediately knew they had an unusual neighbour.

In the following weeks, children would wake up at night, sneezing and gasping for air. The thick, dark smoke would particularly appear denser after dusk, residents say.

Over time, many homes reported thick and sticky residue with a strong, pungent odour on windows and walls.

The wet smoke residue smears easily, which has made cleanup more difficult.

John Mutinda, a representative of the Syokimau Residents Association, says the situation has not improved.

“The smoke has made the neighbourhood uninhabitable. Many residents have even sold their property and left the estate,” he says.

Residents have told the National Environment Management Authority that the offending pollution comes from Endmor Steel Millers Limited, a metal smelting company built inside Syokimau in 2013.

This has opened one of the most vicious battles on air quality in Kenya, pitting the factory against its 12,000 neighbours.

The smoke has made the neighbourhood uninhabitable. Many residents have even sold their property and left the estate.

They complain emissions of particulate matter are beyond the levels recommended by the World Health Organisation and violate the Environmental Management and Coordination Act (EMCA), 1999. Particulate matter is visible smoke, dust, soot and other solid particles, and liquid droplets invisible to the human eye.

Following the residents’ complaints, Nema enforcement officers inspected the factory on January 24. They ordered it closed on February 4.

In his letter to Endmor, Nema deputy director general David Ongare said, “Because of the serious environmental and health risks posed by the facility to the surrounding community, the authority considers that your current operations are contravening Article 42 of the Constitution of Kenya, which guarantees everyone a clean and healthy environment.

As we wait to be let into Maendeleo Learning Centre, smoke drifts over from the chimney of a factory next door. The smoke engulfs the school’s bare ...
Watchdog
3 years ago

He also ordered the factory to conduct ambient air quality analysis and submit a compliance plan, and liaise with inspectors to ensure compliance with the orders.

The owners were also required to undertake comprehensive public participation with the residents and to address their concerns.

However, Endmor fought back and appealed the order at the environment tribunal, which is constituted by the Environment ministry.

Combustion plants are primarily controlled through restrictions on the density of smoke, dust, and grit that such plants emit, and the heights of chimneys in order to disperse any emissions sufficiently so their impacts are negligible.

The appellant factory has several orders to deliver upon, as well as numerous bank facilities to honour over and above the numerous employees who are looking upon it for salaries and sustenance

David Kiama, the operations director at Endmor, says they were surprised by Nema’s move because they have complied with “all requirements".

He said they have already installed an air pollution control system. The 'pollution' that is seen, he says, is actually melting water vapour generated when molten metal gets into contact with air at room temperature”.

“Self-environmental audit was carried out and the report submitted to Nema on 8th October 2018, and we are yet to get any feedback from yourselves. Similar exercise was carried out in the year 2017,” he said in a letter to Nema, responding to the closure order.

Kiama also said the public participation ordered in January this year was already “effectively carried out” during the Environment Impact Assessment process that formed the basis of the licence by Nema.

Nema issued the EIA licence, EIA/1025, in October 2012. The licence instructed the developers to allow a buffer zone between the Sh35 million plant from the nearest residential building to militate against noise and other pollution sources.

“The proponent shall ensure that appropriate and functional efficient air pollution control mechanisms are installed in the facility to control all air emissions,” says the licence, seen by the Star.

The reports say the factory has a furnace oil boiler and a melting furnace with a pollution control system.

It says the nearest residential building is 150m away. The company says it emits nitrogen oxide, sulphur dioxide and PM10 particulate matter.

40 years on, trucks trundle in, dumping at least 2,000 tonnes of waste daily.
News
3 years ago

Particulate air pollution is defined as an air-suspended mixture of both solid and liquid particles. They are often separated into three classifications: coarse, fine and ultrafine particles. Coarse particles have a diameter of between 10 micrometers and 2.5 micrometers and settle relatively quickly.

When someone talks about PM10, they are referring to particles smaller than 10 micrometers. These particles include dust, pollen and mould spores.

These smaller particles generally pass through the nose and throat and enter the lungs. Once inhaled, these particles can affect the lungs and heart and cause serious health effects in individuals at greatest risk, such as people with heart or lung disease, people with diabetes, older adults and children.

Particles larger than 10 micrometers are generally of less concern because they usually do not enter the lungs, although they can still irritate the eyes, nose, and throat.

Residents believe the factory has either not installed the proper control systems, or those installed do not function at all.

The Syokimau Residents Association (SRA) says Endmor should be compelled to undertake air quality, noise and excessive vibration analysis to determine whether it is polluting the environment.

“Nema should order the immediate closure of the manufacturing plant until it undertakes remedial measures to stop polluting the environment,” Mutinda says.

The dispute is still in the Environment Tribunal, pitting Nema and Endmor, whose factory remains operational as hearings continue.

The company says they employ more than 800 workers and have to pay loans and would suffer if the closure is effected.

Uncontrolled development in the past five years has had serious consequences.
News
3 years ago

“The appellant factory has several orders to deliver upon, as well as numerous bank facilities to honour over and above the numerous employees who are looking upon it for salaries and sustenance,” says Endmor’s submission to the environment tribunal, filed by Prof Tom Ojienda, early this year.

The factory also refuses to be limited to daytime operations, saying it sits in an industrial zone, and such limits would hurt their business.

However, Mutinda says the surrounding estate has about 12,000 residents, who will continue to suffer.

He claims some residents, especially children, have been diagnosed with chest complications and other respiratory problems, likely caused by pollution from the factory.

The last three tribunal hearings were postponed, despite the sessions being confirmed in advance. As usual, residents' representatives attend the meetings, hoping for justice.

This story was produced in partnership with Code for Africa’s iLAB data journalism programme, with support from Deutsche Welle Akademie.