At only 27, Rodgers Kirwa is a world-renowned consultant running a model farm in Nandi county to educate farmers

• He advocates drip irrigation and says farming can be done through hydroponics, containers and reusable bags 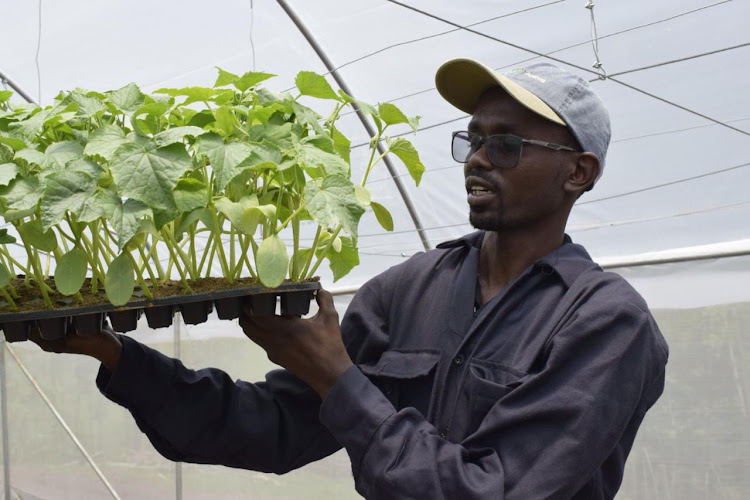 Rodgers Kirwa, popularly referred to as ‘Mr Agriculture’ by friends and associates, is an award-winning agronomist. He believes if youth take up agriculture and do modern farming, Kenya would not be subject to famine every year.

Kirwa, 27, grew up in Nandi, a county full of tea farmers. His interest in farming started when he was a child, admiring farm managers of big multinational tea companies set up in his home area.

Kirwa took it up while still in campus, studying Agribusiness Management at Egerton University on his way to becoming an agronomist (expert in the science of soil management and crop production).

He started off by farming potatoes in 2013 in his father’s farm in Molo. Speaking to the Star in an interview, he said he made a huge killing while farming and decided this is the path he would follow after finishing campus in 2016.

“When I finished school, I realised we were so many graduates. I was inspired by the rate of unemployment, so I decided to engage in agriculture as a kijana. I wanted to empower youths, to talk about agribusiness, tell them benefits of farming, that agriculture is profitable and a cool thing and not for the old,” he said.

“I also saw the average age of a farmer in Kenya is about 60 years old. If we continue with the same trend, would we have future farmers?”

And thus began the inception of his organisation, iAgribiz Africa, which deals with advocacy on agriculture, trainings, consultancy and mentorships.

When I talk to vijana, I always emphasise that there’s money in agribusiness

Realising social media is a powerful tool, Kirwa gained a lot of recognition in April 2016 after doing a lot of agricultural advocacy using the hashtag Agribiztalk254.

“Every Thursday, we had a guest who would discuss topical issues on agriculture,” he said.

In September the same year, Kirwa would be nominated for a Soma (Social Media) award, competing with big companies like Smart Farmer magazine, Shamba Shapeup, Mkulima Young and Amiran Kenya. He was the first runner-up.

Inspired that his impact had been felt, Mr Agriculture would later in 2017 realise there was a big gap he was not filling.

“We were not reaching out to farmers in mashinani. Not every farmer is on social media, and that is when I became a regular guest at vernacular radio stations to discuss agriculture,” he said.

He became popular among his listeners, such that they would call to seek advice, while others would invite him to their farms. “I did this because I wanted to change the narrative for those farmers,” he said.

The agriculturist would later bring in partners well trained in dairy, poultry and horticultural farming. They began the first-ever edition of the Nandi field day training at a friend’s farm.

Kirwa’s first trip out of Kenya was in 2017, when he attended an agricultural forum in Nigeria and represented Kenyan youths.

He would later in April get a short scholarship on Entrepreneurship at Michigan University in the US under a global programme on advancing women in agribusiness.

“In December, I decided I want to do more on horticultural farming. I had an idea where I wanted to establish a model farm. A farm where farmers could get training from and visit. You know, seeing is believing. When I advise them, I tell them come and see for yourself,” Kirwa said.

“I wanted to do modern farming. I wanted to teach farmers agriculture really doesn’t need rain but water. I wanted to change their perspective.”

In January last year, he partnered with an Israeli company, Green Arava, and set up the model farm in his father’s one-acre land in Nandi.

The model farm has a greenhouse and also operates open farming. He does irrigation, where he plants onions, kales, indigenous vegetables and tomatoes. Cucumber and tomatoes are planted in the greenhouse.

He pumps water from the river and uses drip irrigation, and, therefore, does not rely on rainfall, unlike most farmers.

Mr Agriculture did not incur any expenses, as his new partners offered agronomical support for the entire year.

Visitors have since been streaming to the farm, including the Malawian Ambassador, politicians and foreigners.

In 2018, he won the Young Entrepreneurs Awards in the agricultural category. In January this year, he was in Germany, talking about youth in agriculture in a global forum. The next month, he was in Botswana for the Mandela Institute for Development Studies.

In March, he was in Morocco for the Crans Montana forum, where he was a speaker and got awarded.

Mr Agriculture is now a consultant for big and international firms.

You find youths migrating from the rural areas to the city in search of work, yet they’ve left a shamba back at home because they were told in the town is where they will get jobs and money

“There’s more to just farming and eating. There’s the commercial part, and this is what can push young people into agribusiness. That’s why when I talk to vijana, I always emphasise that there’s money in agribusiness. If it’s a good amount of money, he or she will definitely join agriculture,” Kirwa said.

“We also tell the youth to decide where they want to fall in the value chain. You don’t tell all of them to go do farming; others can take part in processing, supplies, manufacturing, marketing and logistics. Engineers can start industries.”

Kirwa believes agribusiness will play a huge part in solving the unemployment menace facing the youth.

He said although capital may act as a barrier, it only requires little money that can be saved up. Land is also not necessary for horticultural farming since soil only acts as a medium. Farming can be done through hydroponics, containers and reusable bags.

He said since most youths are tech savvy, they should focus on ideas that can solve problems facing the agricultural sector.

“The other day I was talking to a youth who has come up with a system for greenhouses, which has sensors dipped into the soil so that when the soil is dry, the sensor automatically opens taps so plants are watered,” he said.

Kirwa emphasised on the need for people to join agribusiness when they are still young to help propagate the industry.

“We have been raised in such a manner that we were told, read so you don’t become a farmer. So we’ve always had a perception that agriculture is for the uneducated. When we were in school, we were given punishments of farming in the shamba, so it has always had a negative perception,” he said.

“You find youths migrating from the rural areas to the city in search of work, yet they’ve left a shamba back at home because they were told in the town is where they will get jobs and money.”

The agronomist also faulted the government for not championing the youths to join agriculture.

“If you go to the Agriculture ministry, you will realise most employees there are old. Who will take up the running of agriculture after they retire?” he asked.

Kirwa believes in the next five years, we will have important data to fast-track agriculture.

“It is very wrong this year we are talking about famine and drought in Turkana, and next year the same case because it has been a trend. You can even know the headlines next year a time like this there will be famine,” he said.

“When we were growing up we always used to hear about famine in Ukambani, but now it’s no longer news. We are not taking relief food to Ukambani because their leaders came together to solve this.

“Agriculture is one sector that is important to every other person. Without it, there’s no life, no food. It is a sector that can give jobs to a huge number of youths. Tech, political will and involvement of youths is what will drive success in our agricultural economy.”

Farmers in Laikipia county are multiplying their yields and doubling their profits thanks to conservation agriculture, which is a low-cost farming ...
Counties
4 years ago

The country has the potential to produce fish through aquaculture
Counties
3 years ago
by MELANIE MWANGI mwangimelanie
Big Read
16 May 2019 - 06:00