ALL WORK AND NO PAY

Amid calls to give interns an allowance to meet basic needs, interns share frustrations of work without pay or employment, while economists warn compulsory pay could diminish opportunities

• Employers will shy away from enrolling interns should they be an extra expense, FKE warns. 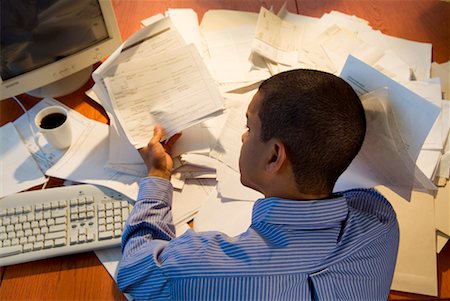 A young man drowns in paperwork at the office
Image: COURTESY

As debate rages on whether or not people should be paid for internship, one beneficiary says what they learnt in campus was instrumental during their internship, while another reports a disconnect between their school work and the job market.

Ella, a Disaster Management and International Relations graduate, says after countless rejection emails, she finally landed an internship at a local insurance company. She was excited and eager to start, but she ended up quitting the job after just four months.

"I did not get to apply anything I learned in school during that period, maybe high school business and math. Immediately after I was accepted, I underwent a week's training before they sent me out to the field," she told the Star.

However, after signing a contract that indicated she was going to be on a retainer, the company changed tune, she says.

"The contract was pretty simple. A retainer fee of a certain amount up until six months to help transition into a working citizen. For airtime, transport and clothes, as we'd need to look presentable for our jobs," she said.

"But as soon as I signed the contract, they said I needed to prove my worth by first doing a month's work. It sounded reasonable and fair, so I talked to my mum to support me, which she gladly did."

Three months into the job, no pay, no commission, no allowance, no retainer, and I was tired, frustrated broke and drained

ALL WORK, NO PAY

Ella says after the first month, the insurance company sent out a memo, stating new recruits had been given a target to reach before they could get any pay. Despite putting in her best, she says the situation remained the same, as the nature of the job got more challenging.

"Four months into the job, no pay, no commission, no allowance, no retainer, and I was tired, frustrated broke and drained," she said.

"One Monday morning, I didn't report to work at all. I never sent a resignation letter or explanation. I know it was immature and unprofessional, but I didn't feel like they deserved any."

For Maina, a hospitality management graduate, the skills he was taught at school helped him after he landed an internship at a top Nairobi hotel. But he says he worked more than the employees with no form of pay.

"It does not make sense when they do not pay you but overwork you and expect you to do a great job," he said during an interview.

Maina says he worked at the hotel for eight months, hoping he would finally land a job with them.

"My parents agreed to rent me a one bedroom house at Sh13,000 and provide money for my upkeep, such as fare, which was about Sh800 per week," he said. "It didn't make sense to me how, after almost a year, they did not offer me a job."

Jane, a second-year University of Nairobi student currently on internship at a Westlands firm, says she also does not apply anything she learnt at school at work.

"I perform a range of duties, including personal assistant work, finance and a little bit of banking work. Nothing I have studied so far really applies in the job market. I'm learning as I go but most of my third-year and fourth-year units will come in handy for sure," she said.

Jane, who receives a monthly allowance of Sh15,000, says the money has really helped ease the burden on her parents.

"The money is just enough for transport and lunch, but before I got it, my parents would cater for everything, which I felt was a burden on them," she said.

If the economy is not doing well, you cannot load the cost to employers. Perhaps the government should provide incentives for employers, such as tax reliefs

Speaking to the Star on the phone, economist Vincent Kimosop said employers should not be burdened further [with paying interns] in an economy that is not doing well.

"If the economy is not doing well, you cannot load the cost to employers. Perhaps the government should provide incentives for employers, such as tax reliefs," he said.

"This is because they are stepping in to address the gap, which is a responsibility of the government."

Kimosop said the decision on whether or not to pay interns needs to be contextualised so an informed decision can be made.

"On one hand, you have to look at the economic benefit of it in terms of succession, skills development and the development of the next generation skills," he said.

"Because in the past, we have had challenges where universities have failed to produce individuals who are ready for the job market, so interventions like internships are good in filling the gap."

However, Tom Ouko, a lecturer at Masinde Muliro University of Science and Technology, said universities play their part.

"It is a fallacy that universities do not prepare their students for the job market. Universities give their best and prepare students well," he said, adding that employers simply assist interns to fit into their work environment and systems.

Samburu West MP Naisula Lesuuda earlier this month drafted a bill calling for a monthly allowance to interns at government or any other institutions.

Ouko said it is a tricky situation because "should the bill be passed, young people will miss out on internships opportunities".

However, he recommends paying post-graduate interns, who are waiting to be absorbed into the job market.

"For interns still in school, payments can remain at the discretion of their employees," Ouko said.

The Federation of Kenyan Employers has warned that chances of interns accessing the workplace will be hurt should employers be obliged to incur extra expenses.

Speaking to the Star on the phone, FKE executive director Jacqueline Mugo called for stakeholder engagement before the bill is advanced.

"This will ensure it has the buy-in of stakeholders and it has win-win solutions that will not harm the chances of interns accessing workplaces," she said.

"If it introduces costs to employers, they will be discouraged to hire interns."

Mugo said employers are incurring a lot of costs just by providing an opportunity to students and fresh graduates to access their workplace.

"The interns use the equipment, workspace, tools, time and material of the employer. The employer should not be forced to pay somebody for providing an opportunity for that person to learn," she said.

MP Lesuuda said the objective of her bill was to address some of the core challenges affecting Kenyans, more so youth seeking employment opportunities.

"Employers must set apart a certain amount of money that will be paid out to interns or persons on attachment at their institutions to enable the persons to cater for their basic needs, as they dispense their services in those institutions," the bill reads.

Mugo, however, said it was the responsibility of the individual, their parents or guardians and the government to ensure interns have adequate money to cater for their needs while on attachment.

"This support can be built in normal tuition fees, bursaries and other government mechanisms to support the interns," she said.

Last month, there was a debate on social media about internships .
News
3 years ago

The ministry of Health is going to post 594 interns in health facilities across the country.In a statement by Mulei Muia the Director of Public ...
News
6 years ago
by NJERI MBUGUA News Reporter
Big Read
14 May 2019 - 06:00