• Commercial interests are the new form of media repression

• Other hurdles cited are partisanship, social media and political ownership 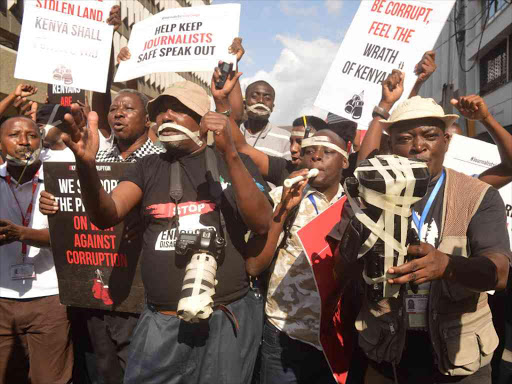 Commercial interests, partisanship, social media and political ownership of news outlets are the greatest threat to media freedom in Kenya, players in the sector say.

It marks a departure from the era when raids, shutdown of media houses and even violence on journalists were common state practices to deal with 'offending' news outlets.

As the World Press Freedom Day is marked today, news consumers, rights activists, media trainers and practitioners point to soft censorship as the latest means used by entities to whip the media into compliance.

This is despite robust laws and regulations to protect and guarantee media independence and freedoms in Kenya.

“Media houses are now looking at news products from a selling point of view, which is from advertisers' perspective. This is seen from how companies like Kenya Airways, Mumias and even Nakumat have been covered in the media as ones doing well only to crumble, instead of holding them to account,” Maina said.

“Calling sleaze on their books of account and general well-being is avoided because they are the biggest advertisers, and media outlets fear losing out on that business. Thus the tough questions are never asked on their performance.”

He said commercial interest has become the third determinant of the editorial content outside news value, where newsrooms use filters to only to please advertisers.

Article 19 works across the region in partnership with other national and regional organisations to safeguard freedom of expression and information.

Maina said official consolidation of government advertising through the Government Advertising Agency is a soft media repression strategy by the state, which media houses should reject if they want their freedom.

“GAA is a form of censorship. This has seen media houses say nothing even on issues that the government is wrong and lost completely for fear of losing out on advertising,” he said.

To navigate this challenge, he proposed that media houses come up with a public advertising law that will allow state agencies to advertise freely with whichever outlet they want.

To insulate themselves from commercial interests, he advised the media house to be creative and come up with more revenue sources and avoid overreliance on one avenue for the bulk of resources.

He said pressure from the state is twofold: as a regulator and as a business partner that dictates revenue flow. Kegoro also cited media ownership as some of the challenges standing in the way of a free media.

“There is a huge concentration of political power in media ownership. With this, the media has pressure exerted on them from the market, state and political owners,” Kegoro said.

The executive director said many media houses are driving themselves into self-censorship, whereas others are facing soft censorship from states seen in stories they choose to cover and those they ignore.

There is a huge concentration of political power in media ownership. With this, the media has pressure exerted on them from the market, state and political owners

“In the past, it was easy to see if the state was displeased with a media house, as this unhappiness could be done publicly. Today, the pressure is no longer coming from the front door. Those in power are using back channels to control the media through exerting undue financial pressure,” Kegoro said.

“To play its watchdog role effectively, the media ownership structure must be dealt with and disintegrated from market power and state power, which is fused at the moment.”

He said media effectiveness in Kenya is being eroded by the advent of alternative news sources aided by social media platforms.

“Kenyan media has suffered from the fact they aren't exclusive anymore, unlike when they were a few papers and few TV stations. Thus its capacity to remain the sole source of reference for truth has been eroded by the rising of other forms of media, making it lack authority on speaking on issues,” Kegoro said.

Fr Gabriel Dolan, a columnist and missionary based in Mombasa, said though prosperous, the greatest challenge facing Kenyan media is being part of the establishment.

“Media represents the interests of the wealthy, the comfortable and the state, thus they focus on the interests of those who established them, meaning they are not solely free to cover public interest issues that might seem a thorn to the establishment,” Dolan said.

They are also suffering from the same problem every Kenyan is facing: apathy, he added.

“Because the royal families control everything, including media content, journalists write good stories come up with exposés expecting some change, but they are discouraged because that change doesn't happen,” Dolan said, adding that though there is some media freedom, there is nothing worth celebrating.

He said social media isn't an alternative, arguing that it only deals with issues in a cosmetic way and not critical enough to be used as s basis of accountability.

University of Nairobi School of Journalism lecturer Dr George Nyabuga said Kenyan media is still vibrant, but financial hurdles stand in the way of its future and freedom.

The former Standard Newspaper managing editor said these financial challenges are hindering the ability by newsrooms to invest in investigative stories, thus compromising their ability to play a full watchdog role.

“Lack of good resources hinders them from hiring or paying their staff well. This has resulted in demotivated journalists, which has a direct implication on the quality and credibility of stories,” he said.

“The repercussion of sloppy poor content and skewed reporting brought about by poor investment is loss of public trusts,” he added, warning against allowing commercial interests to override public interests.

Other than financial strangulation as a media repression strategy, Maina said 'mediatisation' of politics has made media a platform for political barbs.

“Our media is slowly losing its agenda-setting role but becoming an avenue or conveyor belt for political rhetorics,” he said.

Away from external factors, Maina said reporters and editors alike are the greatest threats to media freedom in Kenya.

“Different reporters are partisan. They hold brief for politician A or B, and they don't want them covered negatively. If the reporters are not, then their editors are. This has transformed news creation to a process of protecting partisan interests,” he said.

This trend, he said, is likely to see the media lose its public. “The challenge is that the media has no one to protect them if they are under attack after falling out with politicians,” he said.

Africa Media Hub director Rosemary Okello said the greatest threats to media freedom are both internal and external. She said media houses are yet to come up with a policy to address concerns affecting their freedom internally.

"Apart from talking about media freedom, they (media houses) have not come up with an action plan or a mapping tool for press freedom, so as where there is a violation, they come out and point it out," she said, adding that coming up with indicators will help shield them from any muzzling.

To help media freedom have a direct contribution to the social and economic well-being of the country, she said, there is a need for continuous training of journalists to acquire specific expertise skills that help them address specific challenges.

Pastor Ng'ang'a can't seem to shake troubles off his feet

Off the hook for death by dangerous driving, now facing two other cases
News
3 years ago

He was locked up at Muthaiga Police Station and is set to appear in court Monday.
News
3 years ago

A team of BBC journalists who were arrested in Kampala have been released on police bond.New Vision reported on Friday that the journalists ...
News
3 years ago
by RAMADHAN RAJAB Political Writer
Big Read
03 May 2019 - 06:00