The custom allows minors to be booked purely for sex, before they are married off while as young as nine

• The practice is unique to the Samburu culture 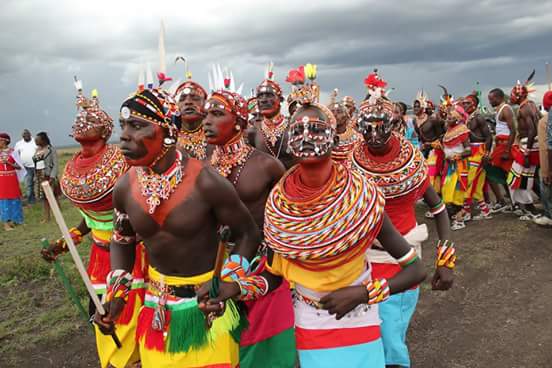 Nashami (not her real name) quietly sat outside her manyatta, watching as other children played, not daring to join them lest her co-wife sees her.

She was wed to an already married middle-aged man when she was just nine years old.

"I was not allowed to play with the other children because I was a wife now and I would receive beatings from my co-wife if i did," she said.

Before being given off as a bride, Nashami like many other girls her age had been 'booked' by a moran in a cultural practice referred to as beading.

The practice, unique to the Samburu culture, involves the moran selecting girlfriends for sexual activity by buying and giving them beads.

Like Nashami, other girls who have not undergone female genital mutilation are eligible for beading by the moran aged between 15 and 35 years.

"There is no sure way to estimate exact ages because most of the people do not know which year they were born," Jeremiah Kipainoi, who works at the Samburu Girls Foundation, said.

"The men are allowed to engage in sexual activities with the girls, and sometimes they wait for the girls to grow up a little more if they bead very young girls."

While beading is widely accepted by these communities, there is no denying that it is defilement because the girls are underage

HANDED OVER BY OWN MOTHER

The process begins after a moran gains interest in a young girl and goes for negotiations with the girl's mother and brothers, who are often morans.

"The relationship is purely sexual and is not aimed for marriage. This is because beading occurs among clan members," Kipainoi said.

Should a girl fall pregnant during her beading period, she either undergoes a traditional abortion, gives up the newborn for infanticide or for adoption into another ethnic community.

Their relationship is terminated when either the moran or the girl gets married.

"Once the family decides a girl is ready for marriage, she is cut the day before her marriage ceremony, and the moran is at liberty to look for another 'girlfriend'," Kipainoi said.

However, once the moran acquires a bride, he ceases to hold his warrior status and is considered a junior elder.

"Junior elders are not allowed to engage in beading," Kipainoi told the Star. While the cultural practices may seem unorthodox, they are considered normal among the Samburu people.

"They have done these practices for ages and it is hard to simply move on from it because we tell them it's wrong," he said.

When the young girls are old enough, they join the moran in singing traditional songs and in the midst of it, come to 'agreements'.

"The parents consent to the practice and in some cases, the girls make plans with the morans to bead them.

There are however rare cases where the girls are forced into relationships with these men," Kipainoi said.

Speaking to the Star on phone, Dr Allan Adungo, an obstetrician and gynaecologist at the Kenyatta National Hospital, said the health implications on the young girls are both psychological and physical.

"They are babies and should not be having intercourse. It is a traumatic experience because they are not prepared for intercourse at all at that time," he said.

Other than psychological trauma, the girls may also experience trauma around the genitalia because their bodies are not mature for intercourse.

Ikol says the trauma may affect them later in life because they may be disinterested in intercourse when they grow up and are at high risk of developing cancer.

"When you engage in sex early in life, there is always the risk of cancer development because the cervix is not mature enough," he said.

There is also a high HIV prevalence among the Samburu youth practising beading because the morans are not limited to a single sexual partner.

They also do not necessarily practise safe sex options. A strategic plan report by the county government shows the county has a HIV prevalence rate of 5 per cent against a population of 274,079.

"This means there are an estimated 13,073 HIV victims, of which only 6,883 know their status, leaving over 6,190 victims who do not know their HIV status," the report reads.

The report further indicates a low condom uptake among men, meaning that even with multiple partners, unsafe sex is still highly practised.

Women have been reported to resort to using female condoms disbursed as beauty hand ornaments, despite low supply.

Other factors, such as limited access to reproductive health awareness and reduced empowerment also increase chances of transmission.

The health of these girls is further put at risk when they are 'cut' in preparation for marriage.

"There are different degrees of the cut that have different health implications. Those practising may develop problems with urination or develop persistent pain around the genitalia, which makes it difficult to engage in intercourse later in life.

Child birth also becomes a problem because the birth canal is narrow," he said. In cases where the girl experiences a tear around the birth canal, she is put at risk of developing recto-vaginal fistula, where stool is passed from the birth canal.

The treatment options available to these girls depend on the degree of the damage caused.

Due to the age group, after rescue, the girls are examined under anesthesia to assess the degree of the injuries incurred.

"If there are any injuries we can repair, we perform corrective surgery. We also subject them to counselling and try and find safe homes for them," he said.

We need to educate the girls on their rights because if they are aware, they may recognise when those rights are being violated and take action

Through the help of the foundation, Nashami was rescued and her husband was arrested and detained. However, a female politician bailed him out of jail.

"Politicians do not publicly shun these practices because that has no political gain for them. They know that if they are backed by clans, then they will get the votes," Kipainoi said.

The foundation, which currently hosts over 300 girls, says they are faced with constant political resistance, which makes it harder to fight for equal rights for the girls.

During a recent discussion on FGM, several survivors of early marriage and FGM accused the local woman representative of supporting these practices.

"We do not enjoy political support from our leaders and because of this we have constant security threats at the foundation," one of them said.

"Some local leaders will publicly deny the existence of these practices, yet they infringe on many of our rights."

Kipainoi says while some politicians offer support, such as food supplies, they do not want to publicly be involved with the fight against these practices.

"We have had some who are outrightly saying the organisation is not legitimate. With a big percentage of the population already illiterate, the leaders make the fight harder by not educating them on these issues," he said.

"While beading is widely accepted by these communities, there is no denying that it is defilement because the girls are underage."

According to the constitution, the age of consent for sexual intercourse is 18 years and sexual activity with anyone under the age of 18 is considered an offence.

"The law is already in place but the government has not taken effective action against these communities. The incentives they provide to assisting organisations can only do so much," Kipainoi said.

He called upon government authorities to take more aggressive action against people who indulge in the infringement of children's rights.

Human rights activist Florence Kanyua, while strongly condemning the practices, encouraged education of the children while they are at a young age.

"We need to educate them on their rights because if they are aware, they may recognise when those rights are being violated and take action," she said.

Kipainoi said several organisations had began holding under-the-tree meetings with the morans to raise awareness because they are the group heavily involved in beading.

"The women do not have much say in such matters, while the elders do not really care. So we have resorted to talking to the morans because they are in a better position to take action," he said.

What goes on during a Samburu wedding

When a Samburu man meets a girl he fancies, he initiates a cultural process that can sometimes last months as bride price negotiations take place. ...
Sasa
3 years ago
by NJERI MBUGUA
Big Read
23 April 2019 - 06:19