A whole generation is falling for get-rich-quick fantasies that often end in losses, debt and despair

• Betting youth are unable to repay loans they take from friends, lending agencies to place bets.

• Interior CS Fred Matiang'i says it is 'destroying our children' and threatened to ban betting firms that are not tax-compliant. 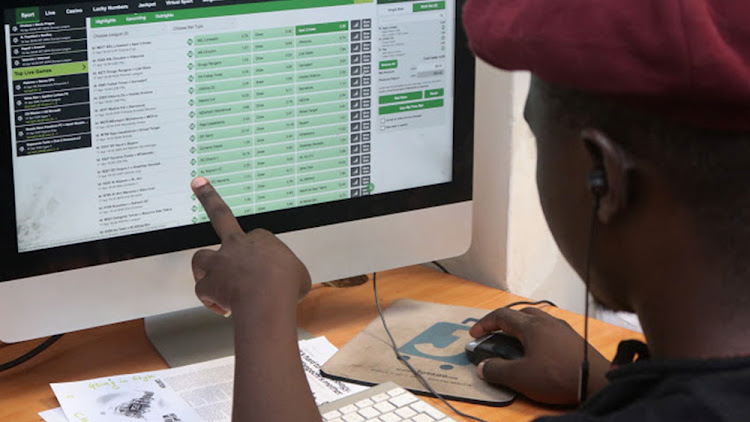 A man analyzes the odds at a popular betting site
Image: VICTOR IMBOTO

At the beginning of the month, Interior CS Fred Matiang’i announced that 76 per cent of young people are involved in some form of betting and that most borrow to bet.

"We need to clean up this sector. We are destroying our children and families," he said.

Over 500,000 youth have been blacklisted from accessing services from money lending agencies, and 52 per cent of people actively involved in betting are low-income earners.

Peter Chege, 29, is one of the youth blacklisted by a popular lending agency for failing to repay a Sh12,000 loan he took from them to place a bet.

Chege, a construction worker in Nairobi, admitted his addiction to betting but said his efforts to stop the vice have so far proved futile.

"I started betting because I was idle and this was a quick way to make money," he told the Star during an interview at a local betting shop.

Sources from a betting shop in Nairobi county said their customer base is spread out among people aged between 18 and 50.

"Daily, we have about five or six people at our shop before opening hours. Some will wake up in the morning, come directly here and spend the day here," a source said.

The shop reported Saturday, Sunday and Wednesday as their peak days. "People typically spend between Sh 1,000 and Sh4,000 daily, but we have had some extreme cases like one customer spent and lost Sh40,000," the source said.

"They tried to beg us to return the money and as we obviously couldn't. The client hanged himself the next day."

Daily, we have about five or six people at our shop before opening hours. Some will wake up in the morning, come directly here and spend the day here

After trying without success to quit the vice, Geoffrey Kimathi, 24, says he would support moves by the government to ban gambling.

"I really want to stop betting and I have tried but I cannot. I would support Matiang'i if he decided to close up all these betting shops," he said.

Kimathi, a construction worker, says he currently owes Sh5,000 to both Fuliza and Mshwari by Safaricom.

He also admitted to selling his household items and taking up another loan of Sh10,000 from a friend to bet.

Murageri and Chege also admitted to selling household items and taking up more loans to gamble.

Interior CS Fred Matiang'i said no betting company will be allowed to operate from July 1 without proving it is tax compliant.

He spoke during a meeting with the Betting Control and Licensing Board earlier in the month, stating that a tax compliance bill will be presented in Parliament.

Last year, the government announced a uniform tax of 35 per cent on gross gaming income on all sectors of the industry, a compromise figure after the 50 per cent proposal drew vehement opposition by betting companies.

They argued that they are already some of the highest taxed companies and use their revenue to sponsor various sports, which would suffer if they pulled out.

According to sources and documents seen by the Star, a local betting shop in Nairobi makes profits as high as Sh15,000 daily.

"Because we are not in a very populated area, we do not make as much as other shops," the source said.

"Last month, we made an average of Sh250,000 from the bets people placed. Other shops that are in populated areas make as much as Sh1 million on a monthly basis."

A 2018 GeoPoll rapid survey ranked Kenya as having the highest number of betting youth.

The survey was carried out in five other countries, including Uganda, Tanzania, Ghana, Nigeria and South Africa. 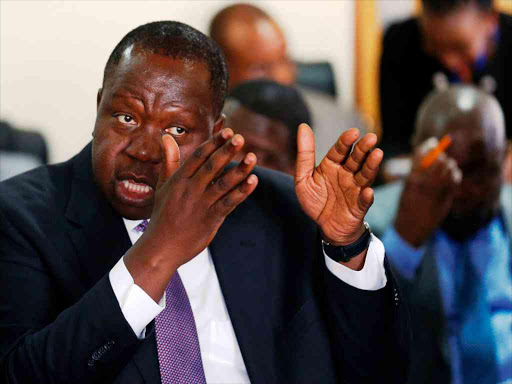 Interior CS Fred Matiang'i said no betting company will be allowed to operate from July 1 without proving it is tax compliant.
Image: JACK OWUOR

Among the most popular gambling options, football betting reigns in all other countries except in South Africa.

"Kenyan youths bet the most, with 79 per cent of bets placed on football matches," the report read.

The respondents we interviewed all stated that they place daily bets on football and other activities, such as horse racing and spin and win.

The youth are swayed by aggressive advertising by betting companies, which allow you to bet on mobile phones with as little as Sh1, and peddle such luring terminology as "sure bets".

The odd lucky winner taking home as much as hundreds of millions of shillings keeps the youth dreaming they could one day hit the jackpot. Such a change of fortunes would enable them to quit their jobs and no longer have to toil for a salary.

That not all games happen in the evenings or on weekends leaves room for constant staking.

"We introduced virtual football, where our clients can place bets on matches that are happening round the clock and win their money faster because the matches only showcase highlights and that takes a few minutes," our source said.

"They can bet as many times as possible throughout the day. They prefer to bet on football because they enjoy the game and are able to analyse matches and make predictions."

Evans Mamoti, 42, says even though he is sometimes among the people who spend all day at the shop, he is not addicted to gambling.

"These young men should realise that betting is a leisure activity and should not be taken as someone's means to earn a living. It is not a job," he said.

Mamoti, who works at a guest house, said he spends an average of Sh2,500 per day and places as many as 200 bets daily.

"I don't spend my salary on betting and yet I use all betting platforms because this is easy money."

Mamoti says he started betting when SportPesa was introduced in the country, and he only bets on football.

These young men should realise that betting is a leisure activity and should not be taken as someone's means to earn a living. It is not a job

Dr Grace Njage, a professional counselor in Nairobi, said a lot of youth get addicted to betting because they lack patience.

"They don't feel like working, so whatever little they get, they want to buy a lot with it, which is not possible. In actual fact, they end up losing everything they have," she said.

Njage said the youth need a reality check; they should be taken through counselling to help those who are addicted.

"The first thing is to try and make them get sense because they are losing a lot of time and money and in reality, they are not getting anything back," she said.

"However, because this is addiction, they require to be taken through counselling to help them overcome it."

Mamoti told the Star the man who killed himself was his best friend. He encouraged betting youth to accept the outcome of their bets so they are not stressed.

"He used to come here like all of us and place bets, and then one day he placed a bet of Sh40,000 and lost," Mamoti said.

"He said he was going to kill himself and later we heard he left a note to his mother and went to hang himself.

"Sometimes you spend a lot of money and make nothing in return and it frustrates you, but we have kept moving because such is life."

All the respondents interviewed said they had not tried counselling because they were not aware of it.

Njage encouraged the youth to leave behind the 'get-rich-quick' mentality because they would end up disappointed.

"They should start the habit of saving a little because it will eventually amount to something significant," she said.

She added that the youth should take up innovative means to make a living.

"There is no way all the people who leave campus will get office jobs at once. Those who cannot secure employment should find innovative ways that will not land them in trouble," she said.

SportPesa paid Sh4.6 billion in tax in 2018. Industry paid at least twice that.
Opinion
2 years ago