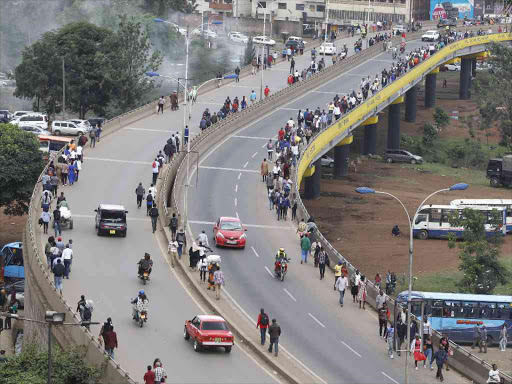 People walk as they get to CBD from Thika superhighway after Nairobi county put to effect the ban of matatus in the CBD yesterday. Photo/Monicah Mwangi

For Jadiel Mwema, a hawker, car-free days in Nairobi as announced by the Transport ministry on Monday will be of no use to hawkers.

He says since they don’t deal in basic commodities, they rely on crowds, which build up when people leave or head to work, to make sales.

To him, the government’s offer to allow them to sell their wares on Wednesdays and Saturdays will be insignificant. Hawking is banned in the Nairobi Central Business District.

“A good business requires a favourable environment. We also have to close our businesses early to look for means back home.”

He told the Star the economy is messed up any time the government interferes with the transport sector.

“They want to kill us. The economy of this country is being driven by matatu and retail business. You can’t interfere with the two and expect to thrive,” Githeka said.

The move follows the government’s plan to implement the Bus Rapid Transport system. Critics include the Law Society of Kenya and the Federation of Kenya Employers.

Most of those opposed to the plan say the city is not ready or has no adequate infrastructure to implement car-free days.

Nairobi has no subway, bike lanes, bike parks, mass transport, waterways, among other installations needed to facilitate free movement of people and goods.

Githeka, in agreement with the opposing groups, said the decision will make residents susceptible to muggings and other forms of robbery.

“The county government and the Transport ministry should analyse how former Nairobi mayor Joe Aketch tried to bring sanity in the county,” the trader said.

He says taking matatus away from the CBD and allowing hawkers to sell their wares is like “closing someone’s business to promote another’s”.

Githeka dismissed claims that matatus block entrances to the shops, saying there is a standard distance matatus are supposed to keep from the pavements.

Just like Mwema, Githeka said he made a paltry Sh5,000 in sales when matatus were banned from the CBD. On an ordinary business day, the trader makes between Sh10-15,000.

He says one 33-seater matatu is equivalent to 33 personal cars, which most of the time carry only one person.

However, Kimani says BRT won’t help in efforts to end traffic congestion in the capital city.

The three are among thousands of Kenyans who have cast doubt on the governments’ decongestion strategy. A number of observers say the plan is not thought out well, and will result in more trouble and chaos for city dwellers.

“It will be business as usual in the rest of the avenues and streets. Public transport will not be interfered with,” the executive said.

He adds that PSV users will still be dropped off and picked from their respective termini. “This is just a test and if it works, we shall implement it on a larger scale,” he added.

Dagane pointed out that congestion in the city is also brought about by people coming and leaving the CBD at the same time. Nairobi traffic gridlock is normally at its peak between 7am to 9am after 5pm.

Dagane told the Star that if the city would have people coming to work in the CBD at a different time of the day, then the congestion would also ease.

Tom Tinega, director of parking at City Hall, said car-free days will not affect revenue collection, as Saturdays are not normally busy.

“This is just a pilot. On Saturday, not so many motorists come into the CBD. Therefore, I cannot say that the revenue will reduce tremendously,” Tinega told the Star.

Nairobi has been losing almost Sh500,000 daily as result of the reduction of parking fee from Sh300 to Sh200.

Defending the car-free plan, Tinega said Nairobi people should embrace change for the city to be a success.

HOW WILL IT WORK?

CS Macharia said the four streets will be closed from 8am to 4pm during the pilot period.

“If it is a success, the initiative will be spread further along Moi Avenue, Haile Selassie Avenue, University Way and Uhuru Highway,” he said.

“The purpose of this is to see how we can start freeing up the CBD. The idea has worked in other parts of the world. Like in Europe, there are some streets that are not opened for vehicles, especially privately owned cars.”

Kenya will be joining African countries Rwanda, South Africa, and Ethiopia, which have car-free days every month.

Macharia said when the time for full rollout comes, further communication will be made to commuters and also PSV operators.

“The objective is to discourage people from using their vehicles. We advise that people leave their cars at home, but no one is stopped from using theirs, as long as they don’t drive on the said four streets,” the CS said.

“But subsequently when we start opening the initiative for more roads, then we shall have designated parking areas within peripheral parts of the city,” he told KTN News.

However, if the pilot succeeds, hawkers will be allowed to sell their products freely on Wednesday and Saturday.

Matatu Owner Association chairman Simon Kimutai said much as the pilot does not affect PSVs, they need to be abreast with future plans that may interfere with their operations.

“It won’t have an impact on public transport because most PSVs operate below Moi Avenue. However, we need to have full information for us to react in the right manner,” he said.

He applauded the plan but urged the ministry to ensure there is stakeholder involvement, so affected parties are involved in the decisions that may be reached.

He warned that the parking space at Uhuru Park is inadequate and cannot accommodate more than 100 vehicles, unless authorities allow motorists to park on the park’s grass lawns.