The tremendous rise of gender-based violence 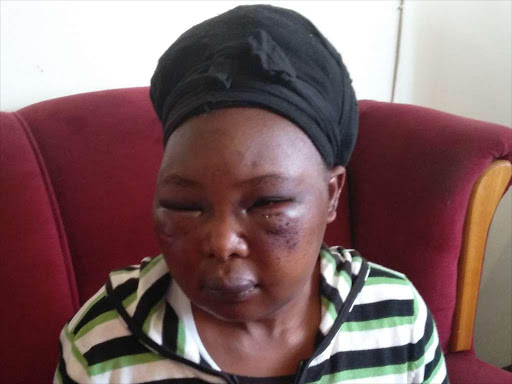 GBV survivor Valerie Masibo at her aunt’s home in Eldoret, where she is recuperating /FILE

Domestic violence has been a long-standing problem in Kenya, particularly in rural areas but increasingly in urban areas and even overseas as well. Deeply ingrained beliefs about gender roles and marriage have encouraged the violence.

Of the reported cases, psychological torture leads followed by physical assault. Nairobi county tops in the number of cases, followed by Kiambu and Kakamega.

The then gender CS Sicily Kariuki was alarmed.

“I’m greatly concerned by the increased reports of numerous cases of gender-based violence across the country, including early child marriage, domestic violence and sexual violence,” she said.

Among the culprits last year was a slaughterhouse worker in Kipkaren, Eldoret town, who battered his pregnant wife for three hours for allegedly misusing Sh500 he gave her.

Nafatali Lusuli was charged with assaulting Valerie Masibo, who sustained facial injuries and had one of her ears almost chopped off.

A picture of her disfigured face went viral on social media, and neighbours informed the police of the assault, leading to his arrest. She was four months' pregnant.

It was reported Valerie had been married to Lusuli for five months. And that was about the fifth time the man had attacked her viciously, but this time it was so serious that she could not even see after the beating.

Another case was when a woman was

caught on tape being beaten up by a man said to be her husband. In the video that went viral, a man, only identified as Nzomo, was pictured raining kicks, blows and slaps on the woman in Kitonyini, Makueni county.

In the clip, some people are heard pleading with the man to stop beating the woman, identified as Evelyn Mwende, but doing little to help her.

Director of Public Prosecutions Noordin Haji ordered the arrest and prosecution of Nzomo. Mwende said her husband had been mistreating her, but she had been holding onto the marriage because she had nowhere else to go.

In Murang'a, a 25-year-old woman was arrested on allegations she stabbed her husband to death in Kangema.

Dorcas Waigwe allegedly killed Julius Njuguna, 25, at their home in Gacharaigu village during a domestic squabble.

Kangema DCIO Peter Wahome said neighbours heard a commotion in the young couple’s home and responded, only to find the man lying in a pool of blood.

The incident had followed barely a month after Gatunguru principal Samuel Mbogo was murdered in his home in Gakurwe.

The principal's wife Alice Mugechi is facing a murder charge over the crime.

Pauline Mugure, 20, who was burned with a stove by her husband after a quarrel over a text message with a neighbour

WHAT THE LAW SAYS

The act seeks to protect victims of domestic violence and provide protection for spouses and any children or dependants in the family unit.

It also recognises sexual violence in marriage, child marriage, FGM, incest, defilement, forced wife inheritance, interference from in-laws and sexual abuse as forms of domestic violence, unlike previously, when they were only associated with physical violence.

Murang’a woman representative Sabina Chege said she will organise seminars to train men on how to deal with domestic squabbles.

She said cases of women harming their husbands are on an alarming increase in Murang’a county.

Another incident of domestic violence happened in the US, where a Kenyan woman was admitted in a hospital in Minnesota with serious injuries after she was allegedly assaulted by her Kenyan husband.

Police in New Brighton City were called to a petrol station in the city to find a woman identified as Emily Kwamboka unconscious. Emergency medical personnel rushed her to Norton Hospital, where she was admitted with multiple facial and neck injuries.

The assault outraged Kenyans on social media across the US, with many calling for tough measures against domestic violence among African immigrants.

Kwamboka’s case was the most recent in a rising number of incidents of domestic violence reported among Kenyan immigrants in America.

“We are more concerned with how partners have become brutal in marriages and relationships. The numbers are increasing even though we don't have a data, but the coverage in the media is worrying, as most of the victims are women,” she said.

Mongare said something needs to be done as marriages are not safe anymore.

She encouraged women to leave bad marriages or seek intervention before it goes out of hand.

“Look for spiritual leaders for advice because most cases come from issues of money and food. If it's not working, just leave. It's better to struggle when you are alone than have your eyes plucked,” she said.

“Every woman as well as girl has the right to a life free of violence. Yet this rupture of human rights occurs in a variety of ways in every community, particularly affecting those who are most marginalised and vulnerable," Mong'are said.

Psychologist Geoffrey Wango said most domestic violence incidents are preventable and there are better ways a couple can handle issues such as anger and conflict.

“When you get in a relationship, you are excited and elated, but remember, you are two different personalities relationship is a process that requires to be worked on. It is important to work out a relationship and learn to sort out issues between yourselves,” he said.

Wango said there are people who are violent, psychopaths and narcissists, but it is advisable that everyone learns to control their emotions, particularly anger.

He urged people with anger management issues and a temperament to seek help from a counselor before they engage in a relationship.

“Learn to pick out anger signs like frequent tantrums, hitting you, breaking objects and general arrogance and a don't-care attitude,”

Some issues, he said, can turn into crisis, such as mistrust and dishonesty and a cheating spouse, adding that they are signs that something is not right and should be sorted out not fought over.

“There could be things that have turned sour, but hitting or worse still killing your spouse is not and never will be a solution. Males must effectively deal with their insecurities, frustrations and disappointments.

Instead find out what could be happening, like lack of love or diminished attention, and hence a partner goes out seeking the same,”

“We need to teach our traditional males to avoid being too egoistic. You cannot be violent at home to your spouse or children. Instead, learn to sort things out.”

the director of GBV and Family Protection, says the rise in

cases of brutality is partly due to expression of freedom, which gives both women and men the right to be equal.

said it has allowed women to argue with their husbands, which maybe be provoking and leading to violence.

“Women nowadays argue with men and sometimes provoke them to be attacked and hurt because no man wants to be seen as overpowered by a woman,” he said.

He said some years back, women used to be beaten by their husbands and it would not make news. But now the mode of brutality is so high that reporting of cases has gone high.

“For example, three incidents in Rift valley happened where women were brutally attacked. There was one where a man killed the wife and mother-in-law, thinking she was encouraging the daughter to leave him,”

Pauline Mugure, a domestic violence victim who was burned by her husband with a kerosene stove at KNH. /Monicah Mwangi​

Post a comment
WATCH: The latest videos from the Star
by CAROLYNE KUBWA @carolynekubwa
Big Read
09 January 2019 - 00:15
Read The E-Paper