The MiniChess Kenya trainer advocates early adoption if the country is to compete with the best. The game mimics battles and is played more in the mind than on a board

• The younger one starts playing it, the higher their chances of competitiveness 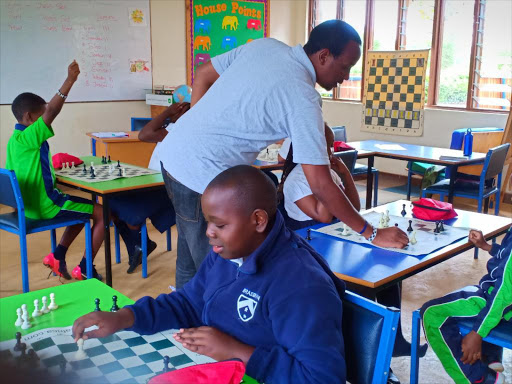 It starts with a handshake. Two generals on opposite sides of a chess board in the calm before the storm. Then they launch attacks, with the army in white taking the initiative. And as they clash, the pieces come to life.

Pawns march on the front line. Knights leap over them. Rooks sidestep them and barrel forward. Bishops fly off on a tangent.

The queen charges left, right and centre. The king shelters in his castle as the action unfolds.

“Checkmate!” the triumphant player declares to the opponent’s dread.

The game is as appealing to some as it is bemusing to others. Chess coach Githinji Hinga, 40, believes that the younger one starts playing it, the higher their chances of competitiveness.

But could a child cope with its complexity?

“In fact, that’s a mistake many people make. They think, ‘Oh, it’s too hard’,” Hinga says.

“Children are a sponge waiting for information and a challenge, and chess creates an infinite challenge. Throw that at them.”

All a child needs, he says, is to pace themselves, adding that there are nations that have curricula starting them off at four and a half years old.

Hinga himself started playing at the age of five in Muthiga, but lost interest after running out of worthy rivals in his neighbourhood. Then when he was 30, he ran into Kenya’s top players leaving for a tournament in Italy. And here he was, thinking it was a small game!

That encounter rekindled his interest. He worked hard to raise his game to a professional level, and it paid off. He rose up the ranks to peak at number three in the country, representing Kenya in Mozambique, Turkey and Tanzania. His latest win was at last month’s Rapid Fire Chess tournament in Karen.

Hinga chaired governing body Chess Kenya from 2013-17, increasing members and sponsors. He invited Russian chess legend Garry Kasparov to the country in 2013 and became the Kenyan representative of his foundation, which trains chess coaches and delivers top-rated chess programmes.

Now semi-retired, the sturdy, soft-spoken veteran nurtures future stars through MiniChess Kenya, which is based in Invisible Crown, Nairobi.

To him, chess is a brain tonic in a system where cramming rather than understanding is the bane of schooling. And he is passionate about promoting it even after leaving the helm of Chess Kenya.

So how does one convince children that all that military strategising is a worthy pursuit, more so when a single game could last hours?

First of all, Hinga says, chess is more enjoyable than people think. “From the outside looking in, it may not look that way, but indeed, it does have a lot of thrill for children,” he says.

Secondly, it has lifelong relevance. While simpler games are age-appropriate, chess can be played into adulthood.

Third and most importantly, hundreds of studies have found that chess strengthens mental capacity and toughens players. It particularly correlates with mathematics and science proficiency.

Hinga calls it “full mental exercise”, saying it boosts memory and helps one focus. It also fosters creativity by sparking imagination and visualisation skills. It’s not the only good mind game, but it’s one of the most powerful.

The parents of Sanjana Deshpande, one of the top female players in Kenya, attested to its influence on their then 16-year-old daughter in 2013. “She has unbelievable discipline and concentration now. She’s first in her classes,” they told the Star.

Globally, most people (about 68 per cent) have an IQ of between 85 and 115, whereas highly rated chess players (Grandmasters) have an IQ of about 160. The strongest Grandmasters hover around 180, with Kasparov himself having an IQ of 190.

Moreover, chess is a sport, not just a pastime. It has tournaments where one can win medals, trophies and cash prizes. For example, the national championships, which ran from Wednesday to Sunday last week, featured a prize fund of Sh400,000.

“The first place winner gets Sh100,000 and an international trip. So there’s a lot of motivation,” Hinga says.

Once in a while, the chess world is shaken by news of a junior player giving seniors a run for their money.

For example, Norway’s Magnus Carlsen, the ‘Mozart of Chess’, was eight and a half when he won his first tournament. By 19, he’d become an International Grandmaster, topping the Elo chess-player rating system in 2010.

Closer home in Uganda, slum girl Phiona Mutesi went from dropping out of school at the age of nine to becoming a three-time Women’s Junior Chess Champion. This inspired the 2016 film Queen of Katwe, starring Lupita Nyong’o, and doubled the number of children in Uganda who want to play chess.

In other sports, experience usually trumps youth, so this aberration is baffling to outsiders. But Hinga is not surprised.

“In fact, chess is the game of the young,” he says, a notion encouraged by Murray Chandler’s famous book, How to Beat Your Dad at Chess. “The top players in the world are young. These guys are very smart and they have energy.”

What matters, he says, is how they are introduced to the game. Even someone who is passionate about chess can be put off by a bad coach.

“How many times do you hear someone say, ‘I never liked math because my teacher was not any good?’ Being a teacher or a mentor or a trainer is a huge responsibility. So whoever is delivering had better do it professionally,” Hinga says.

Talent helps, but success has more to do with industry. “In fact, working hard is a talent in itself. Not everyone has it. So if you can get it from a young age, you can thrive,” he says.

What worries Hinga is that while there is a vibrancy in Kenya in terms of tournaments, regionally even troubled South Sudan has stronger players.

“Our team is more or less the older crowd. We have kind of plateaued. We have lost a generation because chess as a sport was not taken seriously,” he says.

Truth be told, there are more dynamic fields competing for the young’s attention nowadays. A cybercafe in a Nairobi estate, for instance, is patronised by children below 10, who crowd around screens for video games.

If they want some of that action to come alive, there are posters on the walls, luring them to the world of series and movies on DVDs. If that doesn’t catch their fancy, social media is ready to spring a trap.

Board games come across as boring to this generation. Changing their mentality, Hinga says, is a tough fight. “Computer games have a lot of instant gratification,” he says.

It all boils down to students spending so much time with books that when they finally get breathing space, they “go to the opposite extreme”, indulging in things that don’t need much concentration.

Hinga says the education system needs to be reviewed to ensure more holistic development. Constructive exercises, such as chess and music lessons, should be factored in.

“I believe there is a big gap. We need to balance it out. They need to also get into extracurricular activities,” he says.

While Hinga dreams of retiring after clinching the number one ranking in Kenya, what he would like to be remembered for is bringing up world champions. So far, the only countries in sub-Saharan Africa to produce Grandmasters are Zambia (Amon Simutowe, 2009) and South Africa (Kenny Solomon, 2014).

It’s a long-term plan, one Hinga estimates will take about 10 years. It may not necessarily be achieved through him, but he believes he would have laid the foundation for it.

“The day I see a Kenyan Grandmaster, and especially one that I have mentored, kazi yangu kwisha (my job is done),” he says.

So next time you are shopping for a game for your child, don’t underestimate their capacity to take up chess.

If they can manoeuvre their way to victory in this battle of wits, they can rise above their peers in grades, innovation, maturity … and sportsmanship.

For after the long and hard-fought war of attrition, it ends with a handshake. 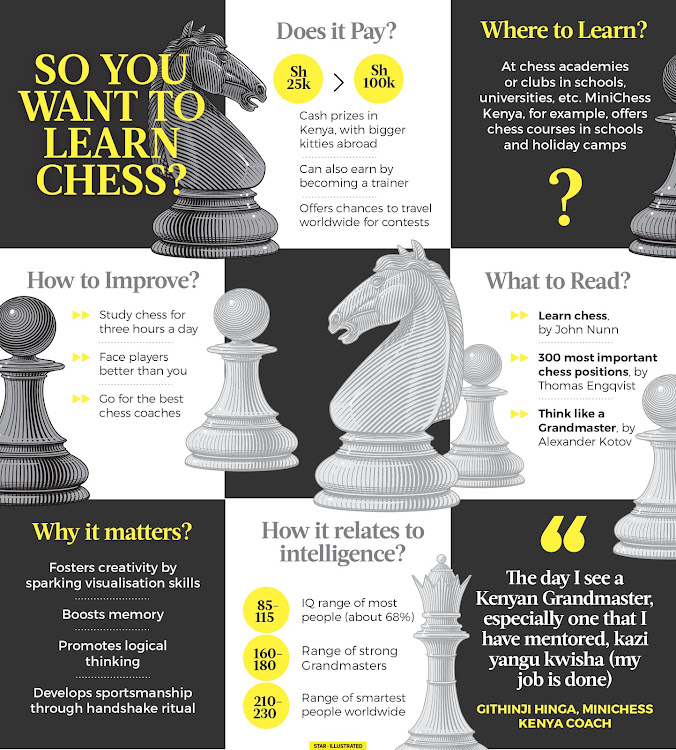 Tom Jalio is an editor by day, writer by night, poet part-time. He is famous for the investigative journalism piece ‘Anatomy of a serial plagiarist’ (http://bit.ly/RdscrPlgrsm). His other works include ‘What Kenya could learn from pristine, orderly and fun Dubai’ (http://bit.ly/254Dxb) and ‘‘Handshake’ and Brexit through the prism of a wedding in England’ (http://bit.ly/GgiFest)’