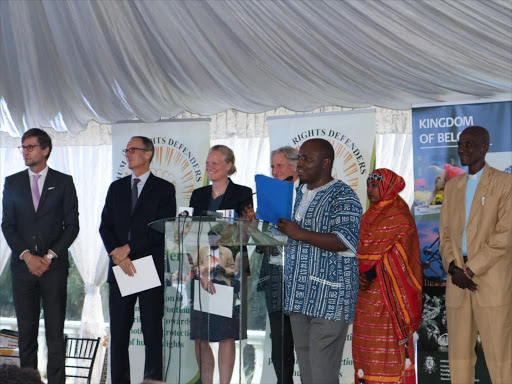 To be a human rights defender is to be brave and selfless. It involves doing work that you might not benefit from, but it is this same work that builds democracies, safeguards the rule of law and fosters justice — Kenya National Commission for Human Rights chairperson Kagwiria Mbogori

Human rights defenders (HRDs) are increasingly under attack, as they are often targets of authorities, companies, armed groups and private entities for the work they do.

As the world gears up to celebrate Human Rights Day on December 10, the National Coalition of Human Rights held the third edition of the Human Rights Defenders Awards on Friday. The Embassy of Belgium hosted the awards at the ambassador’s residence, in partnership with the embassies of Netherlands, Sweden and Switzerland.

In an opinion column published exclusively in the Star the day of the awards ceremony, Belgian Ambassador Nicolas Nihon and former Chief Justice Willy Mutunga noted that: “These awards are an initiative of the HRD Working Group, which brings together Kenyan civil society actors and international partners, united in their commitment to promote and protect human rights and their defenders.

“This working group is currently co-chaired by the Embassy of Belgium and the National Coalition of Human Rights Defenders – Kenya. This partnership reflects the fundamental importance of national and global solidarities to protect human rights, which are universal.”

The selection panel of seven, led by Mutunga, reviewed the nominations, shortlisted the finalists, verified and selected the 2018 winners of the award within three categories. This year the jury looked into: gender, inclusivity, the face of Kenya and youth.

The first two categories had five finalists each, whereas the lifetime achievement category had three finalists. The winners of the award received a cash prize of $1,000 (Sh100,000), a personalised plaque with their name on it, and will be guests at the 2019 HRDs awards ceremony.

Upcoming HRD of the Year was awarded to Christine Kandie from Baringo county. There was a tie on the HRD of the Year award between Mombasa's Anastacia Nambo and Lamu's Is’haq Abubakar.

It is said “no prophet is accepted in his hometown”, and indeed, HRDs have faced great difficulties in their work. These include arrests and detention, restrictions on freedom of expression and movement, and death threats intended to intimidate and instil fear in championing for human rights.

According to a report by the KNCHR on the status of HRDs titled “Defending the defenders”, 35 per cent of the HRDs interviewed said they were in the past charged with incitement, 23% were charged with assault and the remaining number were charged with offences such as defying court orders, creating disturbance, possession of firearms and incitement.

The 2018 human rights defenders shared their diverse experiences and challenges.

comes from a community that is so small in population, and has been so fundamentally marginalised over the years, that many Kenyans would have been hard-pressed to confirm that there is indeed an Endorois community in Kenya, or to pin-point where they live.

Despite living with disability and being a woman from a conservative community, Christine has been at the forefront as part of the team negotiating for compensation on behalf of the Endorois community and empowering the girls and women through training them on their rights.

In 2010, ACHPR ruled in favour of the Endorois community, having found the Kenyan government to have infringed the community’s right to religious practice, property, culture, free disposition of natural resources and development under articles of the African Charter.

After they won the case and negotiation talks on compensation with the government commenced, Christine who was by then working for the EWC, discovered a gap that she was willing to bridge. Women and children were missing in the dialogue, whereas the eviction had the greatest impact on them.

She mobilised and brought women on board to speak about issues that affected them while they were fighting for the community land rights. This is where her journey in highlighting the plight of indigenous women land rights began. She has represented the Endorois community in various regional meetings on issues affecting them and the progress since they won the case in 2010.

Anastacia Nambo started her human rights work in 2009, after a lead melting plant was established in Uhuru Owino slums in Mombasa. Residents suffered poor health, miscarriages and deaths possibly due to lead poisoning. The situation and the community’s struggle was highlighted by the media. Through active advocacy, Anastacia and her community members engaged in demonstrations, which led to the closure of the company in 2014. She encountered threats and fled to Uganda to seek refuge for a while, but is now back in Kenya.

The second winner under the same category, Is’haq Abubakar, is a HRD who focuses on environmental rights, the founder of Coastal Indigenous Peoples' Right for Development and co-founder of Save Lamu, which was founded after the Lapsset project. He has experienced threats and harassment as he struggled to stand for the rights and interests of his community. He filed a petition in court on the environmental impact and human rights violations associated with the project.

Lamu is a remote but incredibly beautiful archipelago to the far north of Kenya’s coastline, and close to the border with Somalia. It is not an easy place to engage in human rights activities. For one, there have been frequent incursions by the terrorist al Shabaab militia based in Somalia. Locals in Lamu have often complained that they are falsely accused of being al Shabaab sympathisers any time they have agitated for their constitutional rights.

But of all the winners, perhaps none is so great a legend, and as familiar a face to all Kenyans with access to mainstream media, as the winner under Lifetime Achievement and Popular Award Okiya Omtatah. Omtatah is an activist who works in the corridors of justice to secure rights for the marginalised and poor through public interest litigation.

One of his successes was his crusade in 1994, challenging powerful individuals in the Kenyan government who attempted to grab the land occupied by the National Theatre with plans to establish a silo for parking cars. Omtatah is also a playwright and among his works is the stage play “Shackles of Doom”, which was performed in 2013 by Butere Girls High School during the National Drama Festivals.

In celebration of the extraordinary work, one of the nominees under the HRD of the Year was John Kambo, a pastor at the Africa Independent Pentecostal Church of Africa. He champions for equity and equality of the gender and minority groups, such as the Lesbian, Gay, Bisexual, Transgender and Intersex community.

He has also endured several problems, including a three-year suspension from his church.

The event was attended by two of the 2017 award winners, the outgoing Upcoming HRD Kizzie Shako and the HRD 2017 Elias Kimaiyo.

Kizzie, a forensic physician and the only female police surgeon in Kenya, is the founder of VunjaKimya foundation, which provides awareness on certain sections of the Kenyan law, sexual and physical assault, child abuse and rights in Kenya. Kizzie shared the power of forensics and how the award contributed to her work.

Elias, who comes from the Sengwer indigenous community, shone a

light on the women in the community during the evictions and the land rights struggles. The award has reduced direct threats and enabled women from Sengwer to secure funds to construct Sengwer Cultural Centre to rejuvenate the degenerating culture, which has faced a history of evictions and land injustices.