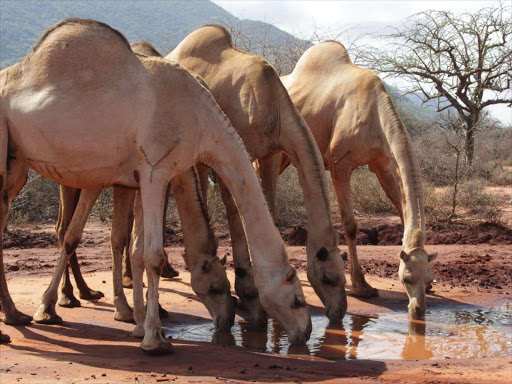 A simmering conflict is in the offing between camel herders and farmers in Taita Taveta, which

has long been the food basket of the Coast region.

Farming and tourism, the region's economic backbone, are now being threatened by camel invasions.

Camel herders have taken over ranches, the Tsavo East and Tsavo West national parks, and now the small farms owned by residents.

Despite prompting clashes, the camel herders say they have a legally binding document with the ranch owners. They also say they have paid hundreds of thousands of shillings to graze their camels in the county's 25 ranches.

However, residents say the camel owners are grazing their animals in their private farms, and trying to confront them is seen as a provocation that leads to violence.

Mwambonu, 66, vividly recalls how the camel herders descended on him with pangas and other crude weapons, when he had confronted a group of six herders grazing camels in his farm in 2012.

The old man, a father of six, teared up as he recounted the experience.

“I was cut on the head, my back and legs. You see, those heartless camel herders left me to die, but I was rescued and taken to the hospital. What had I done wrong? I wanted to remove camels destroying crops in my farm. That attack left my six other neighbours in serious condition as they tried to intervene,” he says.

The farmers were ambushed at Mto wa Mwagodi on Mwatate-Voi highway.

Mwambonu say he was bedridden for a very long time. He lost his job and was left lame.

“I am now classified as a person living with disability. I was a tour driver. I know several foreign languages. But now I cannot continue with what I used to do. My family has really suffered because of what happened on that fateful day of 2012,” he says as he reveals scars on his leg.

He says on that day when they were attacked, one his neighbor lost his life and the family was left without a bread winner.

“To make the matters worse, our case at the law court in Voi was thrown out under unclear circumstances. We did not get justice because the big-moneyed herders used their wealth to buy their way out,” he says.

Now, with the increased cases of camel grazing in Taita Taveta, Mwambonu warns that there should be an urgent intervention before things get out of hand.

Recently, residents held a demonstration to protest against the herders, claiming they have firearms that easily overpower opponents.

Speaking at Mariwenyi in Mwatate subcounty, the residents said the camels were destroying their farms and vegetation, leading to desertification.

“They are here grazing on our land without consent. We are scared. We cannot confront them because they are known to be very violent,” Rose Kididi said.

Another issue is that of a river, Mto wa Mwagodi, which the Mwatate locals and the herders are fighting over.

“We are forced to share the water with the camels. It has become very dirty because of the animals’ droppings and urine. We are afraid that very soon you shall hear of a disease outbreak,” Kididi said.

In Voi subcounty, the situation is not any better.

said her brother was found dead a few days after he confronted invading camel herders in the family farm.

“We live in fear. Those people are very aggressive and violent. They threaten to beat up any person who tries to stand in their way,” she said.

In the neighboring Kirumbi village, Susan Mwandata said the herders raided her farm and let the camels graze on her crops.

She said Sagala residents are now facing two major problems: the frequent elephant attacks from Tsavo that come to their farms during drought seasons, and now the camel invasion.

Herders, however, say they have a right to be there and will not leave soon.

“We cannot be told to move out of the area when we have paid a lot of money to the ranchers. No one can force us out, unless the ranchers do so if they wish,” he said.

He said camel rearing is their main economic activity, and if they are flushed out, they will suffer economic losses.

However, Martin Mwakisakenyi, a village elder from Bamako, says the herders are lying that they have a deal with ranch owners and residents.

"Most residents are now aware of contracts between the herders and ranchers or the local leadership. The camel owners have never held any meetings with residents to be allowed to graze here. We do not recognise the said contracts,"

He called on Director of Public Prosecutions Noordin Haji and the Directorate of Criminal Investigation boss George Kinoti to investigate the contracts.

Taita Taveta Governor Samboja and Senator Jones Mwaruma have also weighed in on the matter and categorically stated that the camel invasion must be ended.

During his Madaraka Day address in Taveta, Samboja said camel grazing is not controlled and has to be stopped.

"We need respect for our land and property. We do not need camels in our farms. They have to move out. This is an injustice and as leaders, we will not allow it to continue under our watch,"

Meanwhile, Senator Jones Mwaruma says he will present a petition to the Senate on the camel menace in the Taita Taveta county.

"Our people are suffering and have been complaining that they do not want to see the camels on their private lands,"

The county government is also coming up with a policy on controlling animal movement to prevent diseases and other conflicts.

Chahilu says the said the group ranches are not exclusively private but under the management of the county government, as stipulated in the Community Land Act.

"Therefore, their activities have to be regulated by the county government," he said.

will prevent secret agreements between a few individuals and herders, which result in the perennial conflicts.

In 2013, efforts by the county government to flush out the camels and livestock were met with resistance, as some of the herders rushed to court to block the operation.

Ranchers' Association chairperson Mcharo Bong’osa has been calling on the government to flush out the livestock.

Bong’osa says the foreign livestock were a threat to the ecosystem of the ranches, Tsavo National Park and neighbouring farms.

"The grazers come with thousands of livestock without any agreement. Some of these livestock spill into our ranches and others to the national park,"

Some poachers are said to disguise themselves as herders before killing elephants and other wildlife in the Tsavo East and West national parks.

Post a comment
WATCH: The latest videos from the Star
by CHARLES MGHENYI @CharlesMghenyi
Big Read
21 November 2018 - 00:15
Read The E-Paper