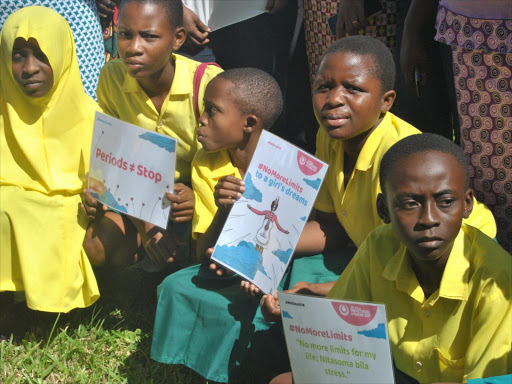 Just the other day, as I was driving from Magarini to Malindi, I came a cross a candidate in her mid-to-late teens walking home from school. She was wearing a sweater to cover a protruding belly.

The girl is among the thousands sitting the Kenya Certificate of Secondary Education examination. She could deliver her

She seemed unworried about the

she was carrying, or how the society perceived her as an soon-to-be mother who is still in school.

In fact, she walked jovially

passengers, probably to board it to her destination and wait for her next test paper the following day.

Her case is just one of the thousands of teenage girls who fall victim to early pregnancy in the society. And Kilifi is at the heart of this crisis.

The county shocked the nation after it was reported that 270 primary school girls are pregnant. Officials blamed it on high rates of poverty, illiteracy and defilement.

Some village elders handle the cases in kangaroo courts. Culprits pay fines and allow the girl to be married off or even to abort the pregnancy.

Latest statistics from the County Children’s Department indicate that over 13,000 girls between 15 and 19 are expecting babies in the county, while some, from as young as 14 years, have already given birth. Most of them end up dropping out of school to get married.

“Every day there is at least one case of sexual offences against minors, and it is alarming,” a court official told the Star.

“In the prisons, there are also many offenders convicted with cases of sexual abuse.”

What is emerging from social debate and research, however, is that it is not always a case of girls being preyed on. Adolescents often have their first sexual encounter during disco matanga (funeral discos), otherwise known as disco vumbi or disco vugu vugu.

These are dances held at night during funeral ceremonies. They run for seven nights as mourners fundraise for a dead person to meet burial expenses.

Children who attend them usually go unaccompanied by their parents. This makes it easy for them to engage in early sex in the bush, informally referred to as ‘green lodges’.

“The dances are held around areas where it is easy for these young persons to hide and have sex, mainly unprotected. Many girls get pregnant during this time,” a research by Plan International in 2016 reported.

The county government banned disco matanga a few months ago, after it was alleged that they attract schoolgirls and lead to illicit sex. The discos have not been completely wiped out, but the authorities are recording a positive response.

Some residents, however, criticised the ban, saying the root cause of teenage pregnancies

is negligence by parents. They fail to play their role to bring up children with morals, critics say.

In his report, county Children’s Officer George Migosi said out of the seven constituencies in the county, Kilifi North is leading with 3,134 pregnancies, followed by

who were reported pregnant in the past one year,” he said.

Migosi said many parents do not report such cases of teenage pregnancies, which

against the law. He said the department will soon arrest and prosecute parents who are irresponsible.

A research done in Kilifi county last year indicated that most girls lack Adolescent Sexual and Reproductive Health (ASRH) knowledge, and this was placed as the top contributor at 31 per cent.

Girls’ love for money was ranked second at 28 per cent, followed by girls receiving favours from teachers, which

ranked at 18 per cent. Forced sex and rape was rated at 11 per cent.

Availability of condoms was hardly seen as a contributing

with only 8 per cent blaming it. This can be attributed to the mass availability of free condoms all over the country up to grassroots level.

the research touched deeply on the issue of funeral discos. It also cited long-held beliefs that girls’ work is to give birth in

upon reaching puberty. The report noted that it is regarded as normal when a teenage girl gets pregnant before marriage.

are exposed to drunkards at their homesteads, where mnazi

(palm wine) business is done. This is more so in rural areas, where strict rules of

Earlier this year, the Star

that many young girls in Magarini constituency, Kilifi county, engage in sex for financial favours to survive during their secondary education.

of Adu, which is in the remotest part of

who are mostly day scholars in the local public schools, become sex objects to get money for food, sanitary towels and even pocket money from boda boda

Most end up being lured to sex with older men in exchange for money, which not only puts them at risk of pregnancy but also of contaminating sexually transmitted diseases.

an NGO has an awareness programme aimed at helping young girls raise their voices against the injustices.

summits to hear the plight of the adolescents. Attendees include youth living with HIV and Aids and orphans.

in Kanamai, participants called on the authorities to state the plans they have to address the rising cases of

time, girls from five zones in the constituency publicly confessed to facing problems that call for intervention to enable

per cent of the 125 girls present in the summit were victims of GBV. They had

to raise their voices and face the authorities due to the

by the Imarisha Msichana project.

Top among the demands of the girls was to ask the county government to allocate sufficient funds in the budget for fighting GBV, and initiate programmes advocating the rights of the girl child.

The girls shared shocking tales of

their experiences, which could worsen the situation if no action is taken.