‘Handshake’ and Brexit through the prism of a wedding in England

My sister’s wedding reception was a melting pot. Natives of at least five continents were huddled outside a marquee in the sailing village of Birdham, Chichester, mingling over tea and cake.

Among the 100-plus colourfully dressed guests was an easygoing black Briton, Nyaika. Pulling on an e-cigarette and blowing out through the side of his mouth, he told me with a flourish: “Welcome to the international nations of England!”

Nyaika has roots in Uganda and was here with his French wife, Sophie. There was also a Polish-English couple, an Indonesian-Dutch one, and so on. And the newlyweds themselves? An English-Kenyan pair, George and Aggie Salt, nicknamed ‘Gaggie’.

It was beautiful, that breaking of boundaries in an otherwise divided world. It evoked, on a larger scale, the satisfaction I got from attending inter-tribal marriages in Kenya.

I had left the country in the wake of a political marriage of sorts, following the now famous “handshake” between President Uhuru Kenyatta and opposition leader Raila Odinga.

This was in stark contrast to the clamour I found in Britain’s political class over the nation’s looming departure from the European Union in March next year.

The crowd I now found myself part of thought Brexit was a bad idea, citing effects on free trade and movement. They blamed the “leave” vote on purposeful misleading by politicians, and explained it with arguments of marginalisation in some areas, particularly the North.

I later learned that both sides of the political divide had lied, and that both had decent arguments to support their position. The people were far more divided than my circle implied.

But, as I soaked in the three-day wedding celebration of ‘GaggieFest’, I laid my journalistic curiosities aside and listened to filmmakers Gaggie recount how they met.

“It started with a sniff,” George reminisced. “That moment when you arrived late at a party in Nairobi, worried you might be a bit sweaty after hosting your sister’s baby shower all day. But we checked each other’s armpits and we agreed that we were both fine.

“And I woke the next morning feeling lightness and excitement, feeling certain that I had met someone beautiful and interesting and fun. And suddenly, those three temporary months that I was supposed to spend in Kenya have turned into six and a half years of a life shared so far.”

During the wedding ceremony earlier on, my mother, Monica, read James Freeman’s “A blessing for marriage”: “May you look for things to praise, often say, ‘I love you!’ and take no notice of small faults. If you have quarrels that push you apart, may both of you hope to have good sense enough to take the first step back…”

One person who never takes a step back is Brexit champion Boris Johnson, whom the Obama White House viewed as “Trump with better hair”. 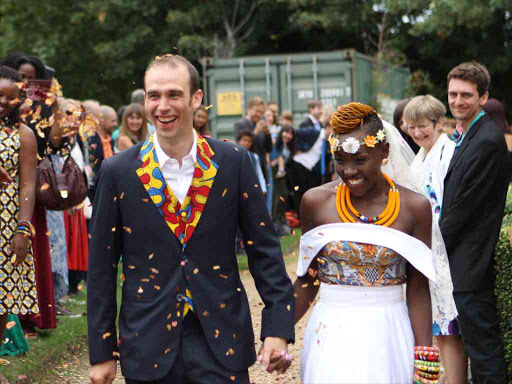 Gaggie (George and Aggie) are showered with confetti after their wedding in St James Church, Birdham, England

He was in the headlines when we arrived, having compared women in burkas and niqabs to “letterboxes” and “bank robbers”. “Boris to face Tory probe in burka storm,” the Evening Standard reported.

Interestingly, a Sky News poll found that 48 per cent of voters thought he should not apologise, while 45 per cent thought he should. Any mention of his name in my company was met with a snort. “The idiot,” they called him, though some admitted to feeling that he’s a smart guy who plays dumb.

One such fellow even said he liked Boris, and thought he could be the next prime minister. According to him, Boris had quit PM Theresa May’s government with a view to unseating her.

The politicians were both from the Conservative Party but seemed like a couple in a strained marriage, with Boris constantly criticising May’s Brexit plan, ‘Chequers’.

And for all his controversies, his stock was rising while hers was dwindling.

No wonder she smiled during her visit to Kenya later on, when Uhuru forgot Boris’ name and referred to him as “the bicycle guy”. I’d seen the ‘Boris Bikes’ in London Boris had set up while mayor, but the diplomatic lapse overshadowed the legacy and gave May’s delegation a laugh.

We’d seen on a trip to Bristol, where Gaggie lived, that the cycling culture was much more widespread.

There was even an endearing nod to it during the wedding, where after the service in St James’ Church, George rode away with Aggie in a rickshaw. She had arrived at the church in a 1930s Brooklands car, but this was the icing on the cake. “If today were to end right here and right now, it would be perfect,” she told George.

We’d landed in London a couple of weeks earlier, aiming to tour a bit before coming to Chichester to make the most of our visas. Europe was in the throes of a heatwave that had contributed to wildfires in Germany, Greece and Sweden. England was having its hottest summer ever.

Aggie told us to pack the kind of clothes we would wear to our humid coast, Mombasa. But when we went for an open-top bus tour in the morning, the skies opened!

I found out in the weeks afterwards that a dodgy climate is one of the hallmarks of English life. Along with red brick houses, double-decker buses, directional signage and scavenging pigeons. Luckily, the GaggieFest weekend was rain-free, and plans for a barbecue and other outdoor activities went without a hitch.

While in our Kenyan weddings, we largely leave the joking to the MC, in Britain, humour flows all around. Everyone from the vicar to the best man had a joke or two. The newlyweds chimed in during an “exchange of vows” over and above the traditional “I do.” This went from the promises being made:

“I promise not to lose my temper when you leave your shoes and your clothes and your tools and pretty much everything that you normally leave on the floor,” Aggie said.

To the limits being set: “I can’t promise to stop leaving stuff out, like my shoes, or jackets or shopping,” George replied to chuckles, “but I recognise to be aware of it more and put things the way that I remember.”

England being the home of football, I asked around which teams people supported. To my surprise, I didn’t meet any stadium-going, every game-watching fanatic, though a run to the World Cup semis had stirred passions. It seemed there was more to English tastes than football, with rugby and cricket playing a huge part as well.

Still, my family paid tribute to the sport by touring Stamford Bridge, immersing ourselves in the experience of Chelsea fans, players and managers. Curiously, the club has only five British passport-holding players in its 25-man squad, symptomatic of a Premier League with 69.2 per cent foreign players, as of last year.

With the tentacles of Brexit spreading to employment laws, I later read, clubs were under pressure to raise the quota to 10-12 home-grown players, or almost half the team.

Over the pre-wedding dinner, Nyaika told me many Brits working in other EU member states are now applying for citizenship there because “nobody knows what’s gonna happen”. Dual citizenship would allow them to continue enjoying the rights of EU citizenship after Brexit.

As festivities wound down, we got round to the speeches and thanks. George teared up as he recalled how the neighbourhood had come together to support the ceremony, from the tea and cake we had at the reception to the house my folks stayed in, which was right next door.

“Every time I spoke to the people that had given those little things, they said, ‘It’s for the love of your mum,’” George said, sobbing.

“Oooh,” the audience sighed in unison.

“Thank you mum,” he told Penny Salt. “Thank you for hosting this. It’s beautiful to have this at home.”

It was a sweet and tender way to end the day’s formalities. Gaggie then led us to the dance floor, and we danced and drank the night away.

A couple of days later, my family and I returned to Kenya, where a 16 per cent VAT on fuel was coming into effect and having a ripple effect on the cost of living, from fares to bread to the beloved unga.

Kenyans were outraged, but Raila spared Uhuru the kind of rabble-rousing his pre-handshake self would have embraced, instead giving hopeful assurances the president would reverse the tax.

As for Boris, his life away from politics was thrust into the limelight after “an affair too many” cost him his marriage to Marina, his wife of 25 years. Brits showed as much sympathy as Kenyans do when it comes to trolling, with one tweeting: “She voted leave.”

But the theatre of politics is but a sideshow in the book of life. What mattered in the afterglow of GaggieFest was how two people from different worlds coming together can unite so many friends from around the globe, so many neighbours, so many relatives.

Penny said the wedding had had a big impact on the village community, and to date they are still talking about it. “They loved the colour, pomp and atmosphere it brought to an otherwise quiet area,” she said thankfully.

Here’s looking to many happy anniversaries of the day!

Tom Jalio is a writer-editor who won an award for the poem ‘There was once something special here’ and was widely acclaimed for the investigative journalism piece ‘Anatomy of a serial plagiarist’ . His works are compiled at http://bit.ly/JalioTales