It's a tough balance for gay men leading double lives 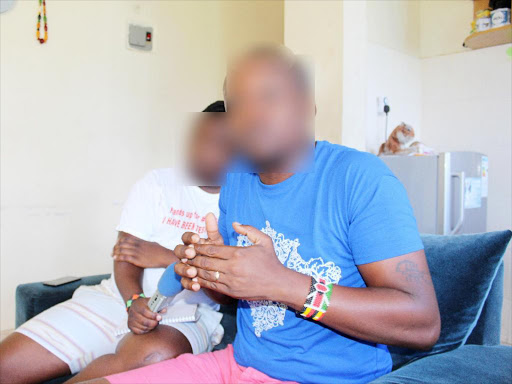 Martin during the interview

In April, the Kenya Film Classification Board banned the movie Rafiki for the homosexual theme depicted in its storyline.

lesbian, gay, bisexual, and transgender community meets from some Kenyans.

For the LGBT community, this hatred is nothing new. Most have been forced to lead double lives to protect themselves and their families' reputation.

This is the case for *Martin, who is legally married with five children and who lives three different lives. Martin and his wife got married in church. He divides his time among his family, Kenyan male lover and “European boyfriend”.

Martin, 37, spends four days a week with his wife and family, and three with his Kenyan lover. However, both are set aside when the European jets into the country.

“My wife and partner always think I am out of town for some business. They do not know I am traversing the country with my European guy,” he said.

Martin cannot bring himself to leave the European, who he says has changed his life.

Born into a polygamous family, Martin, one of dozens other children, felt different at the age of 12. “I was raised in church as an altar boy, but I guess it was not meant for me,” he said.

In Standard Seven he slept with a classmate at his father's home. His father found them and the classmate accused Martin of seducing him.

Martin was disowned by his family. He moved to Mombasa where he briefly stayed with her aunt before going “commercial” on the streets.

“I was getting money but most clients abused me because I was naive and I could not negotiate my terms,” he said.

To keep his gay life a secret, Martin got married, in church, with his male lover as his best man. His wife eventually got wind of his other life when rumours started flying in the neighbourhood.

“She had a problem with my sexuality but we had to come to an [understanding]. She accepted me for whom I am,” Martin said.

“My sexual preferences have remained a [secret] between me and my wife and no one will ever find out. I would understand if she cheats on me with another man.”

Martin later discovered he had contracted HIV but luckily never infected his wife. He has kept his double life hidden from his children.

“I dread the day my children will tell me they are gay. It will break my heart because it is a tough life and I would not want them to go through what I went through,” Martin said.

“I would pay to get medicine that will make me whole because it is not easy to lead a double life just to satisfy your sexual urges [and keep] society [happy].”

Abdullah* also took the step to get married to hide his sexual orientation and protect his family's reputation. He's been married for over two years and wears a gold wedding ring.

His family had high expectations, considering their status in the society. Abdullah comes from a good home and went to good schools.

In college, away from his family, Abdullah saw an opportunity to make money. “We could go to male stripper clubs and by the end of the weekend, we would be [loaded],” he narrates as he giggles.

After graduation, his family, especially his father, had high expectations and he could not risk disappointing him. “My father is a well-known person and there was no way I could have disappointed him.”

Abdullah has been forced to lead a double life to escape the wrath of society and his family. He has two homes; one where his wife and child live and the other outside Mombasa, where he meets his high-end clients.

“My wife thinks I am a businessman and I travel a lot. She does not know the money I use to pamper her is from homosexuality activities,” he said.

Abdullah's sexual performance with the wife is below par but he compensates by showering her with gifts. “I dread the day my wife and family, especially my father, will find out that I'm gay. He will kill me with his own hands,” he said.

Abdullah does not however regret leading a double life. He says if society accepted the LGBT community, they would lead normal lives.

A number of women asked whether they would divorce their husbands if they discovered they were gay said yes. But people no longer go to the streets to pick up male prostitutes, who themselves have also moved away from the streets.

“With the internet and phones, we do not need to go to the streets to get clients. It is just a click and you have the nearest client,” says Mike, who has chosen not to lead a double life.

Mike said there are a number of apps available linking the gay community. They include PlanetRomeo and Jack'd. The most popular in Kenya is Grindr.

Homosexuality is in Kenya. If found guilty one can be jailed for between eight and 13 years.

The court ruled that orders by the High Court to have two men tested was unconstitutional and a violation of their human rights. The lower court ruling was overturned.

They moved to the High Court IN Mombasa to contest using the examination results as evidence. Judge Anyara Emukhule dismissed their application and allowed the test to proceed on grounds the procedure and examination were lawful and within the confines of the Constitution.

Kenya National Muslim Advisory Council chairman Sheikh Juma Ngao says gayism is against the African culture and religion. “The holy Koran, even the Bible, does not support homosexuality. Why should we entertain it?” he said.

Ngao said it's dishonourable for gay men to marry women to hide their secret life. “You not only dirtify yourself but also the woman whom you have married,” he said.

Ngao said a woman should report to religious leaders if she finds out her husband is gay.

He said Islam allows a woman in such a situation to divorce the husband. Ngao said a woman who willingly stays in a relationship with a gay man having found out about his sexual preferences, is also a sinner.

Post a comment
WATCH: The latest videos from the Star
by MALEMBA MKONGO @malemba_mkongo
Big Read
02 July 2018 - 00:15
Read The E-Paper