Courage of a woman who beat late cancer diagnosis 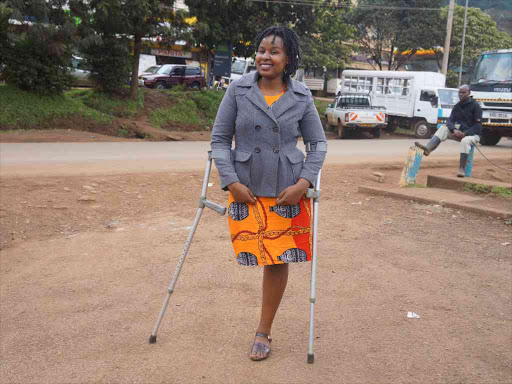 To simply walk around the house is a strain for Catherine Nyambura, 23, but her struggles to do house chores make her courageous in life.

The single mother of one hobbles around her home in Limuru town, Kiambu county, multitasking. She moves on one leg to cook, serve food, drinks, take a bath, change clothes, wash utensils, make her bed and tidy up her sitting room.

Nyambura, whose son Ryan Kang’ethe is three years old, had to be amputated to heal because the disease she suffered from, cancer, would have cut short her life.

However, as she walks to visit her friend and do shopping or even to church with the help of crutches, she smiles and at times laughs long, saying God remembered she had not yet completed her mission on Earth.

Nyambura was diagnosed with cancer in her kneecap that affected her leg.

Her problems started when she was in standard 8 at Limuru Model Primary School in 2010, when she fell on the playing field and her knee was fractured.

“I was playing with other girls, just like other children do. I fell down and felt a lot of pain. I was taken to Tigoni Subcounty Hospital by teachers. My mother came later at the hospital to check on and collect me. I had a fracture on my kneecap,” she remembers.

Nyambura says her leg was plastered for six weeks, and she would walk with the help of a walking stick. She thought she had healed, despite limping after the plaster was removed.

“You wouldn’t notice the limping, but I did. I thought I would limp for short period. Those who noticed my limping suspected I was bouncing or a boastful walking style because I was at the adolescent stage,” she says.

“I limped and I got used to it. I stayed like that for six years.”

Things became worse on May 9, 2016, when she was travelling on a motorcycle and was involved in an accident at Limuru town at the Makuti Market junction.

She says a car obstructed the road and the motorcycle she was travelling on hit the car. They fell down and her same knee was hurt again.

She was taken to Tigoni Subcounty Hospital, where an X-ray was conducted. Doctors found she had not been fractured by the accident, but they detected a growing lymph in her kneecap.

The doctors requested Nyambura to either visit Kijabe Hospital or Kikuyu Hospital, where she would get further check-up and treatment.

Kikuyu Hospital was her option, and her mother Esther Waceke took her there. She was referred to Precise Diagnostic Images Limited at Upper Hill to have a Magnetic Resonance Imaging (MRI) scan conducted on her leg.

“It was conducted and we took the report back to Kikuyu Hospital for further check-ups and observations,” she says.

Nyambura got the shock of her life when doctors told her the MRI results indicated her knee suffered from Sarcoma Marignant Bone Tumor, or cancer of the knee.

“I only heard cancer disease with other people. I couldn’t believe my ears. My mother neither. But we had to accept so we could know what would follow to heal,” she says.

Doctors recommended 15 biopsy tests be conducted so they could establish if she would heal through chemotherapy or amputation.

After two weeks, the results were released. They were called at Kikuyu Hospital and doctors told them Nyambura could heal through amputation, since the lymph was growing very fast and had destroyed her body tissues on the upper leg and lower part of the leg.

“I started wondering how I would be walking. I asked a lot of questions,” she says.

“When we went home, we had to start praying for God’s breakthrough in that process. I told myself to accept to start a new life, no matter how young I was.”

Members of her AIPCK Church, led by Archdeacon Paul Njenga, came and held a prayer service, and wished her well in her healing.

“Doctors also advised and counselled me a lot for two weeks. I called myself a meeting, and realised that people heal, and so I gained courage to face the whole process,” she says.

Cancer survivor Catherine Nyambura with her mother Esther Waceke and her son Ryan Kang’ethe at their home in Limuru town. /GEORGE MUGO

Nyambura was forced to have the amputation at another hospital, since Kikuyu charged Sh400,000, while others were charging almost half the price.

On August 6, 2016, she entered at Sunbeam Hospital in Kangemi Theatre, where her leg was amputated in 4 hours and 40 minutes for Sh200,000. She was observed for two weeks while in the ward, and thereafter, she was discharged.

She returned to Kikuyu Hospital, where Dr Taabu Wasena took over to oversee her healing.

“I used to be treated by Dr Wasena. I would even call him on his phone to ask him questions about the disease, to inform him on my progress, to observe how I was healing. He is very helpful,” she says.

Dr Wasema also conducted a counselling session on Nyambura each Wednesday for three weeks, so she could face life with confidence and positively.

Kikuyu Hospital donated a prosthetic leg to her, but she couldn’t wear it before six months were over. But in that time, she had eaten a lot and gained a lot of weight since she was idle, forcing her not to use the prosthetic leg.

her son Kang’ethe at their home in Limuru town. /GEORGE MUGO

Nyambura says if she had known the six-year limping was due to cancer, she would not have been amputated but would have been treated instead.

“When I had an accident with a motorcycle, my son was only nine months old. He witnessed all I was going through. However, he was lucky since he had started eating solid food,” she says.

“However, doctors told me the lymph that had grown had stayed there for long and if it was noticed in good time, it would have been treated and I would have healed. I would still be having my leg,” she says.

“It is my advice to people not to disregard issues they feel and see in their bodies. They could be problems that could lead to loss of body parts or even life, if they are not checked properly.”

Nyambura says after amputation, biopsy tests were conducted and Dr Wasena told her there were no signs of cancer, confirming she had healed completely.

She says she can start a business if she gets funds, since she needs to support herself financially and educate her son.

Nyathuna Subcounty Hospital nurse Anne Njenga urges people not to disregard changes, marks as well as pains in their bodies, and ensure they get tested to establish their real problem.

“Whenever a disease is noted early enough, doctors are able to treat it completely. Some diseases, such as cancer, HIV-Aids, diabetes among others, need to be treated when they are detected, especially at their early state,” she says.

“It is complicated when patients come to the hospital, when they have already grown, as by then they have destroyed the immune system and important tissues.”