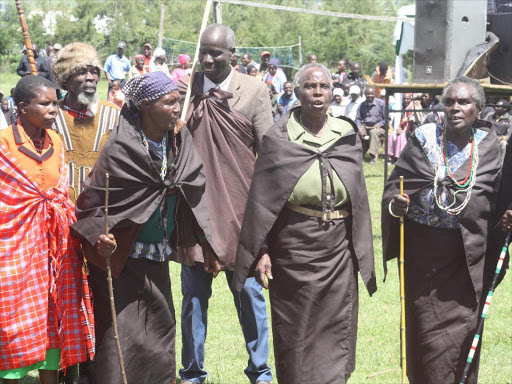 For a community whose name means forest caretakers, it took the Ogiek a painfully long time to earn the right to live in the forest.

Though regarded since the colonial period as traditional forest dwellers, the community has known nothing but evictions for half a century.

That is, until the landmark ruling on May 26 last year, when the African Court on Human and People’s Rights in Tanzania ruled in favour of the community in a human rights case filed against the Kenyan government.

Saturday marked one year since the historic date. The community congregated at Nessuit Primary School grounds in Njoro subcounty to commemorate the ruling, which granted them not only rights to Mau land but also to practise their cultural and religious traditions.

There was pomp and colour as they wore their traditional regalia, singing and dancing to celebrate the outcome of the court ruling and remind themselves of their culture.

The community is scattered in various forests, including seven sections of the Mau Forest. They are hunters and gatherers who over the years depended on forest resources, including honey, wild fruits and game meat, for survival.

"We have been evicted from our land since colonisation and been discriminated against and dominated by our fellow Kenyans, which contributed to the community suffering from the highest illiteracy rate," said Christopher Kipkones, an Ogiek elder living in Nessuit, Nakuru county.

The community sued the government for eight violations of their rights to life, property, natural resources, development, religion and culture under the African Charter on Human and Peoples’ Rights, to which Kenya is a signatory.

The court ruled that the Kenyan government had violated seven articles of the African Charter on Human and People’s Rights, of which Kenya is a signatory, and which is intended to protect basic freedoms and human rights.

It said the government had violated the rights and freedoms of the Ogiek by driving them out of their ancestral lands.

The court ordered the government “to take all appropriate measures within a reasonable time-frame to remedy all the violations established” and inform it of the progress in six months.

It found that the community’s rights on religion, life, property, culture, development and non-discrimination were violated during the eviction after they resisted. It also found that causes of degradation of the water catchment tower were logging and settlement of other communities but not the Ogiek.

Endorois dancers perform during the celebrations, May 26, 2018. /RITA DAMARY

OPDP executive director Daniel Kobei said the community expects the government to honour the ruling. The OPDP is an organisation that works to protect the culture and constitutional rights of the Ogiek people. It helped the community initiate the case in the Arusha-based African Court on Human and Peoples’ Rights.

"It has been more than eight years of legal battle. We ask the government to move with speed and implement the court ruling fully because the issue of Ogiek land rights has finally been heard and the case has empowered them to feel relevant as indigenous people," he said.

One of the last remaining forest-dwelling communities and most marginalised indigenous people in Kenya, the 45,000-strong Ogiek live in the Mau Forest complex.

"The Mau is the source of the Ogiek’s traditional livelihood, where they hunt and gather, but it is also synonymous with their cultural identity. This small community has suffered grave injustices, harassment and evictions in the name of forest conservation efforts at the hands of successive governments since independence in 1963," Kobei said.

He said the government has responded slowly to the reparations claims, acknowledging the African court’s decision. In March, Forestry CS Keriako Tobiko appointed PS Charles Sunkuli as chairperson of a 17-member taskforce formed to implement the court’s decision.

"The response was not entirely favourable to the community’s requests. The court had also given the government six months to implement and asked the Ogiek to file their requests for reparations within two months thereafter," Koibei said.

Kaplelach group perform during the celebrations, May 26, 2018. /RITA DAMARY

The taskforce’s mandate is to recommend measures to provide redress to the claims of the community, which may include restitution to their original land or compensation with alternative land, and prepare a report to be submitted to the African Court and examine the effects of the judgment on similar cases countrywide.

It will also conduct studies and public awareness on the rights of indigenous people and also get views of the members of the public and any interest groups, alongside seeking expertise advice from consultants.

The Kenya National Commission on Human Rights has called on the government to facilitate compensation of the Ogiek community. Chairperson Kagwiria Mbogori said the government should renew the tenure of the taskforce and have its term is extended so that it undertakes its mandate.

Speaking during the community’s anniversary celebrations of the landmark ruling, she said: “This is a historic moment not only for Ogieks but for Kenya as a whole. In making the ruling, the Arusha court was sending a strong message to Kenya and other nations to safeguard culture and the traditional practices of indigenous communities.”

Mbogori said if the taskforce’s term is extended, it will allow more time to conduct public forums with the community towards ensuring implementation of the judgment.

She said despite the government trying to ensure restoration of the Mau Forest, which is a catchment area, there is still more to be done to address land problems Kenya.

Mbogori said land ownership in the country is a “cancer” that needs to be addressed.

"We have tried to ensure issues of Mau Forest are sorted out, but then the issue that involves the Ogiek community and the land ownership is a nationwide problem affecting many Kenyans. We need to sort it once and for all," she said.

Mbogori said the government has played a key role in trying to implement the judgment.

She said in the implementation process, the government should not only look at the Ogiek community but also focus on the benefit of the many Kenyans who still have an issue with land ownership.