Are Uhuru top cop picks a drawback to police independence? 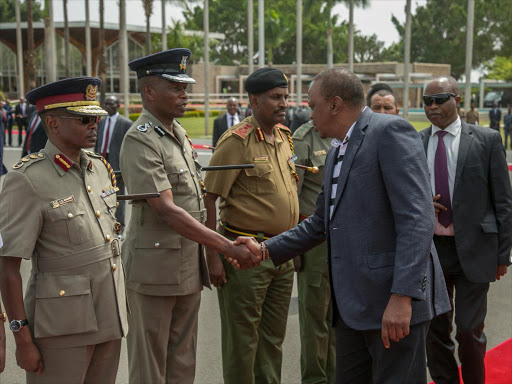 The changes effected by President Uhuru Kenyatta in the top police hierarchy have cast serious aspersions on the independence of the National Police Service from the executive’s control.

On January 5, Uhuru fired three senior officials and sent them to the Public Service Commission for redeployment. They are deputy Inspector Generals Joel Kitili and Samuel Arachi, and Directorate of Criminal Investigations director Ndegwa Muhoro.

The replacements further cemented the perception that the President has taken over the recruitment of the country’s top security chiefs.

Muhoro and Arachi had a few weeks in office as their terms were ending in January. Kitili had only served as DIG for for slightly over two years after his appointment in November 2015.

Uhuru was accused of bypassing the NPSC in firing the three and appointing their successors.

The president named Noor Gabow and Edward Mbugua as the DIG in charge of Administration Police and Kenya Police services respectively in acting capacity.

Fears abound that the National Police Service Commission, the police employer, has ceded its mandate to other authorities.

And the development is seen as drawback to progress made in making the NPS an institution free from state powers.

Although the NPSC declared the three vacancies and invited applications to fill them, most senior police officers gave the jobs a wide berth.

Only eight people, including Uhuru’s appointees, applied for the jobs. All senior KPS officers kept off the jobs, and only Nairobi-based constable Bernard Ombati applied to replace Kitili.

But, just like the other applicants [Bernard Nguma and Veronica Cheptinga], Ombati did not qualify for the job because they were not police officers of the rank of Assistant IG.

Cheptinga is a lawyer working for Uasin Gishu government, while Nguma is a counsellor working for the Kenya Red Cross in Embu. Cheptinga had also applied to replace Muhoro but her application was also rejected.

The law requires those seeking to be DIGs to be police officers of the rank of Assistant IG and above, who should be holders of a university degree with more than 10 years’ experience in an administrative position.

NPSC shortlisted Kinoti and Mbugua, each as the lone candidates for interviews for the DCI boss and DIG in charge of KPS respectively.

In APS, however, Director of Planning and External linkages Vincent Makokha and Assistant IG Musa Kakawa applied alongside Gabow and were all shortlisted for the interviews.

Kinoti, Mbugua and Gabow were “successfully interviewed” by the NPSC on January 18 and sworn into the office the following day.

Senior police officers, who spoke on condition of anonymity before and after the interviews, said the vetting was a formality and the recruitment was closed after Uhuru’s announcement.

“You can’t apply for a job that has already been given to someone else by the appointing authority. It was predetermined and the commission was doing a run-through of the process,” a KPS officer of the rank of AIG told the Star in Nairobi.

Other senior officers who also spoke on condition of anonymity said applying for the jobs could put them at loggerheads with the new bosses.

The Independent Medico Legal Unit executive director Peter Kiama said the NPSC has rendered itself irrelevant by being infiltrated by political interests. He said its recruitment process was an exercise in futility, and there was no public participation.

The director said the NPSC must stick to its mandate under the law and the constitution, and play that role independently, where they initiate a process of employment, provide for public participation, and publish names of the candidates who make it to the top after the procedure.

“The hopes of Kenyans that the NPSC would play the role of professionalising the NPS is now in question. Basically we are seeing a commission happy to cede its powers to other parties, this puts the question taxpayers’ resources we are using on the NPSC,” Kiama said.

“What you find is a situation where as a country, we have to endeavour by all means to safeguard the independence of the NPS, so that we do not take the NPS back to regime policing. Because the responsibility of the police is to provide security for all citizens, irrespective of political affiliation.”

DISCONTENT IN THE RANKS

But NPSC chairman Johnston Kavuludi dismissed the claims that the commission allowed the President take over its mandate.

He said the law requires that whenever a vacancy arises in the office of the DIG, the President should appoint a suitably qualified person to serve as the DIG on the recommendations of the commission within 14 days.

“That is his [Uhuru’s] prerogative because the law says the President may remove, retire or redeploy a DIG anytime before the DIG attains the age of retirement. So the President was absolutely right in exercising the authority conferred on him by the law,” Kavuludi said.

“And he [Uhuru] said it in his speech that ‘on the advice of the commission and consultation with the IG, the following have been appointed in an acting capacity’. It is very clear that the President consults the commission and the IG.”

Kavuludi said the NPSC advertised the three slots to fill the vacancies.

The appointment of Gabow as APS boss has reignited sibling rivalry between the APS and the KPS.

AP officers feel Uhuru’s choice from the KPS was demeaning to them and meant to humiliate them “because it is ascertaining we are subordinates to KPS, yet we are an equal arm of the NPS”.

Until his appointment, Gabow was the commandant of the Kenya Police Training College in Nyeri.

“The APS is stronger than KPS in terms of presence. Our operations, particularly border control and counter-terrorism, are paramilitary, and the suitable person to head this service should be an insider or from the military,” a senior officer said.

They said there are more than 5,000 of them with degree certificates and more experienced and qualified than Gabow.

They expressed disgust at Uhuru’s appointment of Gabow to replace Arachi, overlooking his deputy Fred Mwei and other senior officers in the APS. Mwei is a former district officer and holds the rank of Principal Deputy IG, but he did not apply for the DIG job.

The former long-serving policeman said Kinuthia had a line-up of the most experienced officers who would lead the service, but Arachi shortchanged them and gathered juniors at Jogoo House.

“Arachi was a former District Officer and did not understand the operations of APS. He made a lot of changes that kept experienced officers in lower ranks, hence unable to succeed him,” the ex-policeman said.

But Kavuludi dismissed the officers’ complaints as unfounded.

He said there exists only the NPS, which is divided into two segments for purposes of administration and operations.

Kavuludi said all officers qualified for and interested in the job ought to have applied and let the commission do its work of selecting the DIGs on merit.

“We have one NPS under one IG, who has two deputies, and a person can cross over from one to the other. There is nowhere the law says that you bar a person from APS assuming the responsibility of the KPS or KPS taking responsibilities in APS,” Kavuludi said.

“Our KPS and APS forming the NPS is a very disciplined service that acts in a very professional manner. We don’t have activism in those two police services, and the commission respects how they function. We don’t to ascribe what trade unions do in police service; it doesn’t happen,” Kavuludi said.

‘SHUT UP OR EXIT’

NPS spokesman Charles Owino said, “Gabow is a blessing to APS, and those making such complaints should be held liable for serious indiscipline meant to ignite disaffection within the service.”

Owino said there is only single NPS and there can’t be restrictions in movements across the two founding services.

“These [DIG’s offices] are senior management positions, and an officer of NPS can manage anywhere. Those saying they are being overlooked because they are more deserving are either ignorant or selfish and can resign and look for a job elsewhere,” Owino said.

“We have Osugo [Commissioner General of Kenya Prisons Service] and had [Edwin] Nyaseda [from DCI] and Hussein Ali [from Kenya Air Force].”

Osugo was the Nairobi Provincial CID officer before he was appointed the Prisons boss.

But Kavuludi said, “We invited anybody who is qualified to apply, and anybody who wanted applied. You can’t go to people’s homes and tell them to apply. If anybody applied and their names are not here, they should challenge us.

“It is a professional interview and the matters that we are interrogating are matters that touch on high security institutions, dealing with very technical security issues.”