Is the Lamu coal power plant a poisoned chalice to the economy? 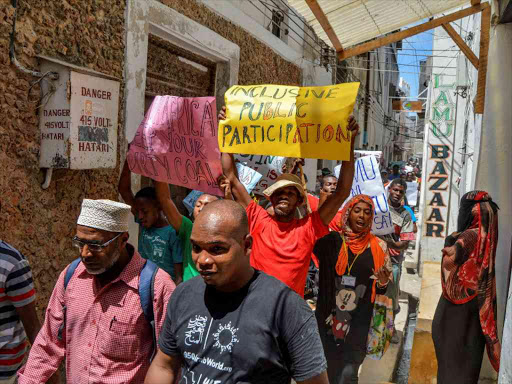 Walid Amed Ali (C) on December 6, 2016, takes part in a demonstration against government plans to build a coal plant in Lamu / REUTERS

As the world shifts from coal-fired power plants in the race to shut down coal plants for less risky and safe natural gas, Kenya is on the journey to setting up one at the acclaimed world heritage site Manda Bay in Lamu.

Government officials and private sector proponents say other than creating jobs for locals, the coal plant is timed to be a game changer in the country’s energy mix. However, experts foresee doom for Kenyans.

Set to be known as AMU Power, the proposed plant in Kwasasi area of Lindi, about 21km north of Lamu town, has already received a National Environment Management Authority (NEMA) licence qualifying it as environmentally sound. However, this is being challenged in court, with a stay order on the project in force.

Despite the court order and ongoing case over its social and environmental concerns, on June 23 last year, President Uhuru Kenyatta led a delegation of investors to sign a Sh200 billion deal in China completing the funding needs of the project.

Early this year, China cancelled plans to build 103 coal plants and put out a directive to bring down coal use and promote new sources of power like wind, nuclear and solar in Beijing. The shift is aimed at dumping coal, seen as one of the most expensive and dirtiest forms of energy generation and adopting cleaner and cheap energy solution with the hope gifting clear blue skies with blue skies to the country that its atmosphere is known to be blanketed with smog and humid due to high pollution rates.

Constructions of the project, which was launched in 2013 with a view of injecting 5000MW of power to the national grid, was to begin in December 2015 and be completed within 30 days, but so far, only clearance of the site has been done.

Even though NEMA’s Environmental and Social Impact Assessment (ESIA) said the project had complied with all environment regulations and vouched that it will have zero effects on the island and its inhabitants, experts termed the project dangerous not only to human but also to marine life.

Ernest Niemi, an economist and president of Natural Resource Economics, who has done studies on coal plants across the world for over 40 years, said operating the AMU power coal plant to produce electricity will be cheap for the developers but expensive as an energy source to consumers and detrimental to the society in general.

Testifying before the National Environmental Tribunal in Nairobi on Tuesday last week, the US-based consultant said Kenya will incur a massive health burden coupled with deaths with the operation of the plant.

Studies across the world, he said, show that the social cost of running coal-fired power plants exceeds the economic benefits.

“To the developers and from the inside, the project looks good, but it is bad for the society in terms of air and water pollution,” he said.

Musingi, who is also a senior lecturer at the University of Nairobi and Geography and Environmental Studies programme coordinator, said the burning of coal will release toxic substances to the atmosphere, which will be harmful to the environment, people and marine life.

Emissions from the plant stacks will contain toxic gases like carbon dioxide, sulphur, mercury, arsenic and nitrous oxide, he said.

“The effects of these gases will be felt away from the plant site when they descend from the 210m stack down to ground surface. The known health impacts of flue gases are eye damage, breathing problems, renal problems, effects on nervous system, pulmonary effects, cardio-vascular diseases and potential for cancer,” Musingi said.

“Exposure to mercury in food and water will have serious consequences to livelihoods. Studies done around coal plants found an increase in hospital admissions of patients with flue gases related ailments.”

Other than coal combustion, Niemi said sulphur dioxide, nitrogen dioxide, and mercury particles will be emitted as well by vessels delivering the coal at the port, compounding the pollution rate and leading to outbreak of respiratory diseases.

“Studies around the world show that children born down the windward side of a coal power plant are underweight, requiring constant medical attention to survive. Most of these babies have disabilities that cause pain and suffering. There is general slow development. Therefore, the ripple effect is that they will have low incomes if they manage to grow to maturity,” Niemi said.

Even though under the 2015 Paris Climate Agreement, Kenya committed to cut emissions by 30 per cent by 2030, the AMU Power project experts concurred that it will be contrary to the commitment.

“The project will raise the carbon level by a massive 8.8 million tonnes instantly from only one source, making it single greatest polluter of toxic emissions in the country,” he said.

Emission of carbon dioxide into the atmosphere, Niemi explained, will intensify hit-waves that will contribute to erratic weather blamed for droughts and floods that kill people and destroy infrastructure, as well as dissolve in oceans, making it acidic and destroying not only the ecosystem but also fishing grounds.

Despite a massive carbon footprint, Musingi said the project will have no vegetation to act as carbon sink, hence no carbon sequestration, because over 80ha of ancient natural forests are set to be cleared to pave way for construction.

“The proposed mitigation measures of planting trees cannot entirely mitigate this problem because the displaced vegetation includes both indigenous trees and undergrowth, which have reached their climax and hence cannot be easily replaced in a period of less than 100 years.”

Moreover, Kenya’s Water, Agriculture and Environment ministries receive a lot of support from global climate resilience funds, and the approval of the project by the government might be seen abuse of those funds.

Niemi said the EIA/ESIA that was used to approve the project had flaws, whereas Musingi said it had serious inconsistencies with the legal framework on conducting the exercise.

Musingi said the said public hearings on the project have no minutes or list of attendees, and was done on a Friday, when most residents were in mosques and there was no public awareness.

Niemi faulted the report for just mentioning that the project will generate some social cost but failing to quantify them.

“The report has no description of the social cost of the coal fire power plant. Therefore, the citizen has no way to compare the impact of the coal against the benefit of the electricity. Neither does it provide reliable estimate of the carbon dioxide the project would emit and the the cost,” he said, adding that with the Sh69 billion worth of electricity the project is timed to net annually, the associated carbon emissions would result in social costs of Sh28-Sh580 billion by degrading the ecosystem.

Musingi said even though the EIA mentions that the prevailing wind direction – South, average wind speed 3.4 m/s, maximum 10-year 15.5 m/s – it, however, does not explain the implication of these statistics on pollution.

“For example, what lies to the south of the site, where the impact of the flue gases will be highly felt is towards Mukowe and Lamu Island itself? With the wind speeds provided, what will be the touchdown of the flue gases from the stack height?” he asked, adding that the minimum and maximum temperatures at the site are 27.20C and 30.30C respectively, while the design temperatures are given as 270°C.

“Will we be justified to say that the design needs to be redone to comply with the site prevailing room temperatures? Will it affect the safety of the plant if its designed to operate under lower temperatures compared to the average prevailing temperatures of the site?” he asked.

In spite of the fact that the project will cause many occupation health related diseases to the workers and also diseases emanating from the plant to the neighbourhood community, Musingi said the EIA had no comprehensive mitigation measures provided for the ailments. He said one will have expected a recommendation for the construction of a hospital on the Plant Land to cater for employees and residents.

“The ‘Polluter pays principle’ states that those who cause pollution must be responsible for its abatement and its consequences as well. This is in our EMCA Law and also is part of global best practices in dealing with pollution,” he said.

Contrary to required standards, the EIA failed to provide options for the proposed project.

“If it is found that the negative impacts cannot entirely be mitigated to a bare minimum – it means abandon the plan – this should have been the obvious option, if it wasn’t the case of the ‘He who pays the piper calls the tune’,” Musingi said.

“EIA should not be an apologist document meant only to satisfy the paper work before project implementation. Unfortunately, until Nema becomes an independent body with the security of tenure its effectiveness in protecting our environment will remain weak. Moreover, polluters are normally economically powerful corporations, while the plaintiffs are ordinarily citizens with low economic power,” he added.

Our efforts to reach Nema were futile, as they shrugged off from commenting on the matter.

He further faulted the EIA for failing to do a cost-benefit analysis and putting in consideration of the renewability of the option considered and whether the area is endowed with renewable energy potential.

Musingi said Lamu has adequate sunlight six hours daily for 365 days, with adequate land at the same site to lay solar panels, arguing that opting for a coal-fired plant instead of other renewable energy sources is not clever.

Diane Francis, Contributor at National Post, Atlantic Council and Hudson Institute DC, in an article published by Huffingtonpost on May 27, termed Kenya’s proposed project a strategic mistake similar to one made by Angola in 2006.

“Of all the deals China pursues, this is the most nonsensical,” she said, arguing that Kenya needs to look beyond 19th century ‘smokestack’ economic development model, as it has enough geothermal, solar, hydro and wind energy potential that not only can satisfy local power needs but as well can be exported.

“The deal is insulting, given that Beijing has banned construction of new coal plants. By contrast, China pushes clean energy at home and pushes dirty energy projects abroad and hopes to build 50 coal plants throughout Africa,” she wrote, adding that the Lamu Coal project is meant to create jobs for Chinese companies, banks and workers as it generates export revenues for South Africa.

“Progressive leaders are moving to solar and other renewable energy, which will undercut fossils and is much cheaper, while laggards are still stuck on coal fire plants,” he said.