History of failure in previous attempts to ban plastic bags 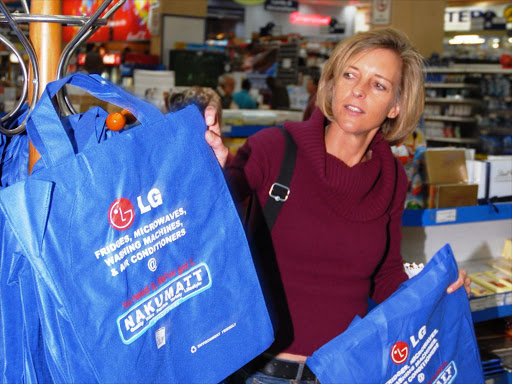 Nakumatt supermarket Re-usable bags to be used instead of polythene bags./FILE

Previous attempts to ban plastics in Kenya have flopped on several occasions.

In January 2011, Nema declared a ban on bags below 0.6mm in thickness, but no results were achieved.

In 2007, the government issued a ban against bags below 0.3mm in thickness, which also failed.

Meanwhile, concern has grown over the rise in micro plastics — particles up to 5mm in diameter either manufactured or created when plastic breaks down.

Their ingestion has been widely reported in marine organisms, including sea birds, fish, mussels, worms and zoo-plankton.

In 2014, a study by the United Nations Environmental Programme and partners estimated that about 280 million tonnes of plastic are produced globally each year, and only a very small percentage is recycled.

Instead, some of that plastic ends up in the world's oceans, costing several billion dollars annually in environmental damage to marine ecosystems.

Closer home, a research revealed that 100 million plastic bags are handed out annually in Kenya by supermarkets alone.

The study was carried out by the National Environmental Management Agency in conjunction with Unep and the Kenya Institute of Public Policy Research and Analysis,

The plastic menace was discussed during the United Nations Environment Assembly (UNEA 2) held in Nairobi between May 23 to 27, 2016.

The world’s environment ministers gathered at the second session of the United Nations Environment Assembly and passed far-reaching resolutions.

These included those touching on marine litter, the illegal trade in wildlife, air pollution, chemicals and waste, and sustainable consumption and production.

These are an integral part of the global action needed to implement the 2030 Agenda for Sustainable Development and the Paris Climate Agreement.

The Assembly, which held its sessions in Gigiri, heard that there is an estimated 5.2 trillion pieces of plastic floating in our oceans, harming both the marine environment and biodiversity.

To address this problem, member states resolved to encourage product manufacturers and others to consider the life-cycle environmental impacts of products containing microbeads and compostable polymers, including possible downstream impacts.

Delegates also sought Unep's assistance in assessing the effectiveness of governance strategies and approaches to combat marine plastic litter and microplastics, and identify how to address gaps.

They asked Unep to help develop and implement national and regional action plans to target marine litter, with emphasis on those regions that are the largest sources.