A worrying trend: Teenage pregnancies on the rise 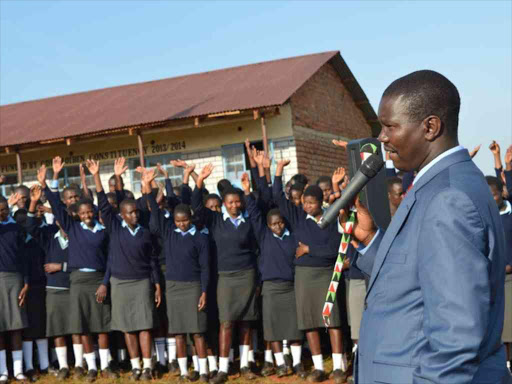 Sixteen year old Janet Chebet from Turbo sub-county in Uasin Gishu is already a mother at her young age.

She was forced to drop out of class 8 at a local primary school in the area and did not even have chance to sit for her KCPE exams last year.

“My teacher asked me to be his friend and after some time I got pregnant. I now have a baby and would have wished to go back to class but I have to stay home and take care of my baby”, she says.

Chebet says she can not go to repeat class eight in same locality because she feels embarrassed and has become the laughing stock for her former school mates and age mates in the area.

She is just one among thousands of girls in the Rift Valley region which is recording an alarmingly high number of cases of teen pregnancies that have led to an equally high dropout rate of girls from schools in the region.

Parents, teachers and education stakeholders are worried that with the long holidays this year, the problem may worsen next year thus affecting girl-child education in the region where the girls still face many more challenges including FGM, early marriages, defilement and other harmful cultural practices.

Schools in Uasin Gishu, Nandi, Trans Nzoia and Elgeyo Marakwet have in the last two years recorded high dropout rates with Uasin Gishu standing out the most affected.

Records from government offices in the region indicate that at least 400 girls have dropped out of schools in the county due to pregnancies in the last three years with Turbo sub-county worst affected.

Chebet is among 22 girls aged between 14 and 16 years had dropped out of Chepsaita, Osorongai, St Peters Soin and Boinet primary and secondary schools in Turbo Sub County and Uasin Gishu Deputy Governor Daniel Chemno says many more cases have been reported in the region.

Governor for the area Jackson Mandago and Chemno have teamed up to help fight teen pregnancies and other challenges which affect education standards in the region.

“We have invested heavily in the education sector including giving our bursaries to support our students and we are totally against anything that may particularly affect girl childe education”, said Mandago.

He says the county will not allow early pregnancies to ruin the lives of young girls.

“The problem of early pregnancies for school girls is very serious and we have to tackle it if we are to ensure that our girls pursue education to highest level possible”, said Chemno

Chemno pushed to have 22 men responsible for the pregnancies in Turbo but he regrets that the cases have taken too long in courts yet the young girls have already paid the price dropping out of schools with some turning into young mothers with a bleak future as they have no means to earn a living.

Many of the suspects charged before the courts in Eldoret have denied offenses including defilement, having carnal knowledge with minors and impregnating school girls and police argue that the cases have to follow due process just like other crimes hence the delays.

Uasin Gishu County Commissioner Abdi Hassan says the pregnancies among school girls are also very high in slum areas of Eldoret town and other centers thanks to high abuse of drugs and alcohol among youth along with other causes.

“As a society we have to go deeper and look into the problem of teen pregnancies, defilement of young girls and the high drop out rates of girls from our schools”, says Hassan. Indeed the government, teachers and parents are looking at the reasons behind the increased teen pregnancies in the region.

Teachers, boda boda operators, drivers, touts and idle youth are being blamed for the pregnancies and Chemno says regardless of who they are the law should not spare anyone involved in impregnating schools girls.

Chairman of the Muslim Preachers and Imams in Rift Valley along with Bishop Cornelius Korir of the Catholic Church in Eldoret argue that society has lost its morals to the extend that adults fail to take care children or school girls in uniform whom they come across.

“Apart from the pregnancies we even have a very many cases of abortion among the young girls and as a church and parents we must devise ways to take of the girls through good parenting, guiding and counseling”, said Bishop Korir.

He says parents have become too busy leaving the responsibility of guiding girls and other youth to second parties like teachers, peers and strangers.

The Catholic Church has insisted that it will not accept have sex education introduced in schools in the country yet some stakeholders argue that such education would have been vital in creating awareness among youth on the dangers of engaging in premature sex activities.

Korir says having sex education in schools amounts to selling human dignity and misleading the youth.

Korir says parents must be allowed to continue playing the role of guiding school children on morality and discipline.

“Now we have the long holidays and parents should not behave as usual. They must take extra care especially for the girls because unless they do so we are likely to record high incidences of pregnancies among girls who may then be forced to drop out of schools next year”, said Bini.

He said the long holidays may come along with increased immorality among youth, drug and alcohol abuse that will lead to such pregnancies and other dangers to the youth.

pregnancies and the school Principal Sypro Kizito says the girls were impregnated mostly by boda boda operators in the area.

Kizito wants leaders and the community in the area to help up put up boarding facilities for girls so that they can live within the school compound.

“As a teacher I have noted that we are overexposing our girls to strangers while they are away from schools and home. These incidences can be reduced by having many boarding schools for girls”, she says.

She says while on transit to and from the day schools many girls and handled by the boda boda operators and other matatu touts who in many cases mislead the young girls causing them to engage in premature sex that leads to pregnancies or spread of diseases like Hiv ads.

Chairman of the National Parents Association Nicholas Maiyo says they are equally concerned with the high incidences of pregnancies in schools and that they will discuss the issue with the government and other stakeholders in the education sector.

“Our focus should be on having our education system to be more child centered and this means that both girls and boys must be looked at equally in terms of issues that may affect their progress”, said Maiyo. He said they will collect national data from schools and other details on the pregnancies to help develop interventions.

Chemno says it’s unfortunate that some of the case involve teachers in the affected schools mostly the untrained teachers employed by school BOGs.

He says even though the country faces a shortage of teachers, schools should not be allowed to hire untrained teachers because they have not gone through the necessary training to be able to handle school girls while on duty.

Out of the 22 men facing charges for impregnating the girls in Turbo area, eight of them are untrained teachers and many cases involving such teachers have been reported across the region.

Teachers Union KNUT official Alice Tuwei says while the shortage of teachers is a well-known fact says any such cases involving teachers should be handled through the due process.

“Pregnancies among school girls is a worrying issue and we need to look into the matter wholistically in terms of who is involved, why, effects, and interventions”, said Tuwei.

Director of the children's department in Trans Nzoia County Esther Wasige says many other cases go unreported and the records so far are alarming.

“With the statistics we have its evident that the girl child is an endangered species. We are working with parents, teachers, religious leaders and counselors to ensure that we come up with solutions to the problem”, said Wasige.

It’s estimated that Trans Nzoia has more than 150 girls dropping out of schools last year due to pregnancies.

Four month ago the government ordered officials at Moi Girls Kapsowar High School to re-admit eight pregnant girls who had been expelled and bared from registering to sit for this year’s KCSE exams.

Elgeyo Marakwet County Director of Education Sabina Aroni directed Principal Dinah Cheruiyot to ensure the girls are registered and she says schools should look into ways of helping such girls continue with their education by resuming school in different locations to avoid stigmatization.

Due to the problem of early pregnancies complicated with the FGM practice, Elgeyo Marakwet recorded more than 300 girls who dropped out of schools last year and education officials complain that due to the same problems the transition rate for girls from primary to secondary schools is quite low.

There are no clear data on girls affected but West Pokot and Baringo are also among the regions with high rates of teen pregnancies.

In the case of Uasin Gishu, Chemno was also on the forefront of pushing to have the girls in Turbo area re-admitted to schools after giving birth.

“The girls must be given a second chance to get education and as stakeholders we have to strongly support their rehabilitation while ensuring that justice is served on those responsible for ruining the lives of the young girls”, said Chemno.

bear the burden in their lifetime.

He says the Children Act and other legal provisions to do

“We can not allow such serious criminal acts to be handled in kangaroo courts when there are clear legal provisions to deal with those involved”, says Hassan adding that parents or officers found condoning such kangaroo courts should be arrested and prosecuted along with the men responsible for the pregnancies.

At national level Chairperson of the Anti-FGM board Linah Kilimo is a member of a committee planning the launch of a major campaign against early marriages in all counties in the country.

She says many girls fall pregnant while still in school and are forced to drop out for early marriages.

“We want to have a national approach to sensitize communities on this matter of teen pregnancies, early marriages and FGM”, says Kilimo. She says the girls who get pregnant early in life are exposed to many health risks and some end up suffering serious complications like Fistula

The Maendeleo Ya Wanawake Organization (MYWO) says it will help to fight increasing cases of defilement of children and teen pregnancies in the region.

Women leaders from 14 counties in the region led by Ann Kibet met in Eldoret and said they would sensitize communities not to condone such cases by protecting suspects.

“Some of the cases even involve relatives to the young girls but whatever the case they must be made to face the full force of the law”, she said.

All stakeholders agree that if the problem is not dealt with villages across the country will be full of illiterate young girls who are mothers a situation which would be a reverse of efforts to improve the standards of education and healthcare for all Kenyans.