Woman walks around the country in autism awareness campaign 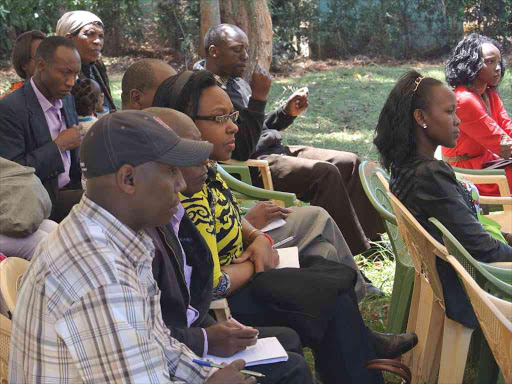 Sometimes she spends several days in the bush, on her own, walking her way. Then she reach towns and mingles with people. Abigail Brooke, 33, alias Abby, walks with camels carrying her luggage along the way.

“I started this walk two months ago. On my journeys, I emphasise the importance of education, create support and open a way for people to understand and work with autism. I plan to walk across Africa to help create autism awareness and acceptance,” she says.

Abby was diagnosed with Asperger’s Syndrome while 13 in England, where she had gone for education, although born in Nairobi.

“Because of both myself and everyone around me not really understanding anything about it, I told no one and had no one to talk to, or with. I’d describe myself as a free-thinking gypsy nomad (if that’s even a thing). I love being in nature, travelling, reading, art, photography, music, meeting people, learning about cultures and so much more. I take a keen interest in how the world works,” she says.

She says she spent a large chunk of her life not really knowing anything about who she was.

“Bullied, discriminated and teased almost constantly throughout (and even after) my school years, I lost a lot of self-confidence and developed serious depression,” she says.

In 2011, she reached out to the wider autistic world on social media. Connecting with other people who ‘get her’ was life-changing in the best way, noting that her whole world changed; she was finally able to find her own place in the world.

“Over the last few years, I’ve been gaining an understanding of both myself and autism. I reached out to the wider autism and disability community in Kenya. Speaking with others, volunteering in the field, and doing my own research provided me a deeper understanding on the issues surrounding disabilities in Africa,” Abby says.

Abby is not a stranger to a global perspective. She has made a few trips overseas, took a year backpacking around Australia, and spent a year studying in South Africa.

“But Kenya has been my home and heart from birth. A country with a low level of awareness about autism, its issues and acceptance for people affected by it,” she adds.

Her walks focuses on impoverished areas, where knowledge, education and support are lacking, and joined by specialists, she give talks at schools, clinics, faith-based groups, communities and the general public.

They help to de-stigmatise autism and disabilities in Africa, fight discrimination of people and encourage communities to work together.

Since last month, Abby has walked and talked in Embu, Laikipia, Meru and Nyeri counties, and now aims to walk around Africa.

Autism Spectrum Disorder is a lifelong developmental condition that typically appears during the first three years of life. It affects 3 major areas in life: communication, social skills and behaviour.

The term spectrum stands for the broad variety of symptoms and intensity levels characteristic of persons affected by autism. It is generally accepted that ASD is caused by abnormalities in brain structure or function. Without knowing one single and precise cause, research is exploring different assumptions, such as heredity, genetics and medical issues.

Statistics show that one in every 68 children is affected by autism, with boys five times more often affected than girls. It is considered that ASD is the fastest-growing developmental disability of the past few decades.

Autism is still a relatively unknown and un-discussed issue in Africa, due to lack of awareness, education and support. Existing centres and schools in parts of Africa working with autism are very few and often too expensive for most people.

Impoverished, rural and remote areas are particularly affected by these deficiencies of knowledge and access to care. Due to the stigma and discrimination many people project on persons with disabilities in Africa, individuals with autism are not given much in terms of acceptance.

Children and adults who display the typical signs of autism are often denied education, victimised, and in extreme cases even murdered.

Increased awareness, early diagnosis and intervention, and access to appropriate services and support lead to significantly improved outcomes. Early intervention from the ages of two to three years has proven to be very important in enabling children with autism to live a satisfying and independent life.

They mainly include activities to increase communication, socialisation, activities of daily living and play, as well as to modify behaviour and facilitate sensory integration.

The needs of persons affected by autism evolve with their age, and specific conditions and care can be proposed for the different phases of life.

As adults, many persons affected by autism are able to take part in a fulfilling life, both professional and private, with some of them evolving in a highly qualified professional environment. They often need a well-structured embedding adapted to their needs.

Some well-known individuals on the spectrum include Isaac Newton, Albert Einstein and the biologist Temple Grandin.

According to a new study by researchers at Washington State University Vancouver, based on a survey of 326 families, slightly more than half the women polled worked fewer hours to accommodate the needs of their child, and three out of five had not taken a job because of their child’s autism.

To care for the child, one-quarter had taken a leave of absence and nearly as many had not taken a promotion. Nearly 60 per cent had suffered financial problems in the past year.

These are some of the experiences that led some parents to raise awareness in Kenya on the subject and to encourage the many parents who had lost hope that the situation could not be managed.

She says public awareness will help parents stop spending huge bills on hospitals in the hope that the disorder will be cured, and instead focus more on managing and rehabilitating people with autism.

Eva Nyoike, 50, a special needs consultant, runs a programme called Acorn Special Tutorials which deals with children with cerebral palsy, Down’s syndrome and autism. “Trauma, whether physiological or psychological (emotional), could trigger autism. Though there is a pattern, nobody knows yet what causes autism,” she says.

Autism or autistic disorder is a lifelong mental disability that affects how a person communicates and relates to other people, and how they experience the world around them.

According to Dr Amina Abubakar, a psychologist at Kemri, autism is a mental disability that manifests in children under the age of three years, and doctors are yet to find out what really causes the condition.

“It is a disability that is not easily identified. This makes it hard for people to know more about it,” Amina says.

“Autism is characterised by many things. Most of the children suffering from it cannot maintain eye contact when they are greeted and they find it difficult to play with others.”

Special Education Professionals is a multi-disciplinary team of special education professionals working with children with disabilities, and operating within the framework of education, rehabilitation and healthcare in Kenya.

Autism Awareness Kenya is a registered society made up of parents, professionals and volunteers who aim to raise awareness about autism in Kenya. It aims to reduce stigma, increase services and change attitudes in order to give people with autism a chance to reach their full potential.