I am not the Mugabe of UoN - Babu Owino 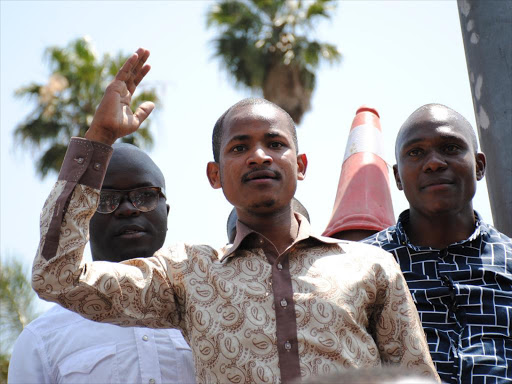 The University of Nairobi students have for the past couple of days, engaged

the police in running battles.

The students went on a rampage over disputed SONU election results which saw Babu Owino declared chairman, fourth year in a row.

But who is Babu Owino? Our

reporter Rhoda Odhiambo spoke to the man whom many consider controversial.

Who is Babu Owino?

My real name is Paul Ongili Owino. Babu is my childhood nickname. I am 28 years old and was born October 10, 1988

in Kisumu. I consider myself a humble and down to earth person. My mum single-handedly raised my two older siblings and I, after my dad passed on early in my childhood.

Where did you go to school?

I went to Central Primary School in Kisumu where I attained 401 marks in my KCPE exams. I later joined Kisumu Boys, scoring an A (minus) of 79 points in KCSE. After clearing high school in 2005, I was called to Egerton University but instead opted to do A levels after receiving a scholarship to join Millennium Academy. I did six units including a diploma in law, pure chemistry, statistics, applied and pure mathematics, mechanics and accounting within a span of two years. I got a distinction. I received a partial scholarship to study

However, raising the 30 percent needed by the university proved

to be a challenge and hence ended up not going.

Is that when you decided to join a local university?

Yes. When I could not raise the amount needed to join Southampton University, UoN was my alternative plan. I enrolled in 2008 to pursue actuarial science because I had a passion for math. I graduated in 2012 with first class honors. As young boy, I also loved anything touching on legislation and that’s pushed me to enroll for another degree in law. I am currently a third year law student and have no regrets about choosing it. Politics and law is a good combination

especially for those who aspire to join politics. After completing my degree, my plans are to set up an actuarial firm as well as a law practice and create employment.

You first ran for SONU chair in 2011, what motivated you?

I was trying my luck in student politics and lucky enough, I won. Previous chairs had also not addressed the challenging student issues so I wanted to help them.

This is your fourth year as chair. How much have you spent in

total for your campaigns?

Well, during my first campaign, I spent close to Sh800,000 on posters, paying agents and other logistics. In my second campaign, nearly Sh1 million shillings was spent due to the increased number of opponents vying for the same seat.

The third time cost me Sh700,000. Finally this last campaign

was the cheapest only costing

half a million shillings.

Many students have expressed concern in regards to your fourth term as chair. What have you achieved so far?

After the Garissa University terrorist attack

I made sure security was enhanced within the campus. I also gave my input to the university council for the construction of the ongoing university towers. Furthermore, I have also assisted students get jobs in the

world through networking. Apart from that, I managed to allow parallel students to vie for union posts which were mainly contested by regular students. Last year, I was successful in stopping the government from increasing the number of universities.

Some students have gone ahead and claimed

you to be the 'Mugabe of UoN'.

What is your take?

I am not the Mugabe of UoN. People should understand that one year is such a short time to serve people and make substantive change. If MPs, Governors and Senators are complaining that five years is a short time to serve their constituents, one year for me as Sonu chair is also not enough. In fact, one takes four months to settle in office leaving only eight months to work.

You have mentioned that you spent Sh1million shillings on your

second campaign. This is a lot of money for a student to put in for campus elections. Where do you get your funding? Do you have people who sponsor you?

farming,I have three businesses namely Averex Properties, Bluemont Constructions and Emizen Supplys. The profits they generate enable me to raise the amounts needed to mount a campaign. I also have connections both locally and internationally.

Claims are rife that there are policitians who bankroll your campaigns? Is this true?

I am not ready to disclose who they are and how much they give me. I don’t call them politicians or company CEOs. They are my friends who contribute small amounts towards my campaigns. Who said you cannot be friends with a politician?

Many would expect this year to be your last at the helm of Sonu. If that is the case, what are your plans after your term ends?

Yes, I will not be running again for the Sonu chair. Next year, I will be vying for the Embakasi MP seat. It will not be my first attempt at active politics.

After completing my first degree, I took a chance at national politics where I ran for Westlands MP Seat but lost to the incumbent Honorable Tim Wanyonyi.

I don’t go after something that I cannot manage. With confidence, I will be the next MP for that constituency. The problems Kenyans are facing are more or less the same. It’s also wise to note that if you are a registered voter, one can vie for any seat in any part of the country.

You have become unpopular due to the disputed union elections earning the wrath of students who consequently set ablaze the Sonu offices. How do you plan on regaining trust among "your fellow comrades” and other Kenyans when you

You cannot talk about being unpopular after getting 18,000 votes. The only problem people have with me is that I have been Sonu

chair for four years. I didn’t burn the student office and did not in any instruct the students to demonstrate. My opponent, Mike Jacobs, who led students to protest, was the one responsible for torching the offices, not me. This makes me more popular because people can clearly see what type of a leader he is. How can you burn an office that you want to occupy?

is it you will do differently for the residents of

I want to empower the women and youth. I also want to ensure that those who are not able to pay school fees, get access to bursaries to

finance their education. The road network in Embakasi is also not that good and is on my priority of issues I want to address.

Social media has been awash with video clips of where you are seen dishing out money.

What's your rationale behind

You cannot show off with money. Personally, when someone asks me for money, I will freely give them because they are clearly in need. My life in Nyalenda slums was not easy but my family survived. Right now, we are living a good life so is helping someone out a sin? As for the clip doing rounds on social media, during and after the union elections, it wasn’t during the campaign period. That clip was taken in February this year.

Finally, what don’t people know about you?

I am married with two children, a boy and a girl. However, I chose to keep my family life private. As a child, I also helped my mum sell chang’aa so she could be able to put food on the table. This landed me in prison several times.

Post a comment
WATCH: The latest videos from the Star
by RHODA ODHIAMBO @OdhiamboRhoda
Big Read
08 April 2016 - 05:00
Read The E-Paper