Ireland to return mummified remains and sarcophagus to Egypt

• An inscription on the wooden sarcophagus, which was donated to UCC, suggests it belonged to a man named Hor.

• The human remains are thought to be that of an adult male and were donated to the UCC in 1928. 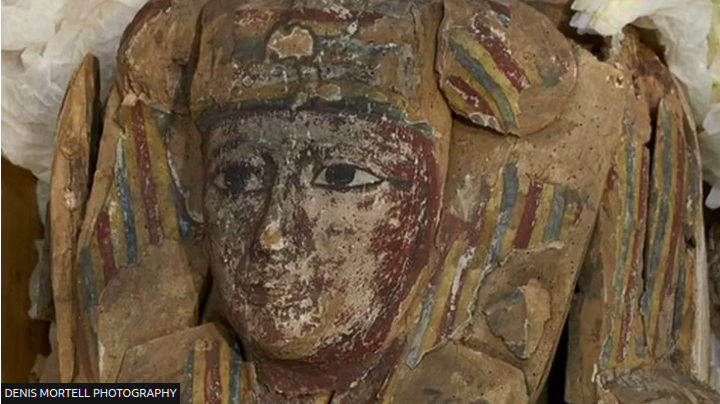 Mummified human remains and a sarcophagus are among the ancient objects that an Irish university says it plans to repatriate to Egypt.

All of the artefacts being returned by the University College Cork (UCC) date from between 100AD and 975BC.

An inscription on the wooden sarcophagus, which was donated to UCC, suggests it belonged to a man named Hor.

The human remains are thought to be that of an adult male and were donated to the UCC in 1928.

The items also include a set of four canopic jars - containers used by ancient Egyptians during mummification - and funerary head and body coverings known as cartonnage.

The jars are the oldest items, likely dating between 945-700BC, and were bought by the UCC from an antique dealership in Yorkshire.

There are no records indicating how the cartonnage made its way to the university.

The sarcophagus was excavated by Italian Egyptologist Ernesto Schiaparelli in the early 1900s.

The announcement of the items' return follows ongoing discussions between UCC, the Egyptian and Irish governments, and the National Museum of Ireland.

Ireland's Minister for Foreign Affairs, Simon Coveney, said he was "delighted" that his department could help in what he described as an "important project".

Egypt's ambassador to Ireland, Mohamed Sarwat Selim, expressed his thanks to everyone involved in the repatriation.

The items' return will be documented in a creative project called Kinship, which is being lead by the Irish artist Dorothy Cross.

"The essence of Kinship is the return of a mummified body of an Egyptian man from Ireland to Cairo, mirroring the tragic displacement and migration of thousands of people from their homelands today," Ms Cross said.

In recent years, more and more institutions are returning artefacts to their homelands.

Greek officials are said to be in preliminary talks with the British Museum about the return of the Parthenon Sculptures, also known as the Elgin Marbles.

Meanwhile, Germany announced earlier this year that it planned to return objects taken from Africa during its colonial rule.

An NFT of the image is created, which also acts as an online gallery where anyone can view the images.
News
8 months ago

New York returns $19m worth of stolen art to Italy

The stolen artefacts were sold on to museums and private dealers by convicted looters, said Mr Alvin Bragg.
News
5 months ago
Post a comment
WATCH: The latest videos from the Star
by BBC NEWS None
Africa
08 December 2022 - 21:58
Read The E-Paper