The reasons behind the detention of the bishop and the two priests are unknown.

•Another priest, Abba Abraham from the Capuchin Society, was reportedly also detained in Teseney town. 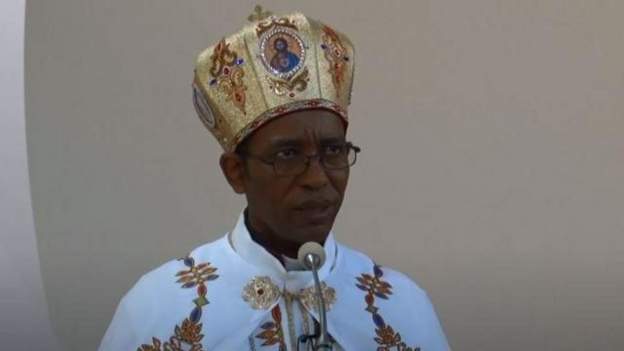 A Catholic bishop was arrested by Eritrean security agents on Saturday morning at Asmara international airport after arriving from Europe, sources in and outside the country have told the BBC.

The government has not publicly commented on the reported arrest of Bishop Abune Fikremariam Hagos, who was ordained as the first bishop of Segheneity in southern Eritrea in 2012.

The Catholic Church has asked the relevant government authorities for the bishop's whereabouts. The authorities are said to have informed the church that it was "holding" the prelate but did not disclose where or why he was detained.

Another priest, Abba Abraham from the Capuchin Society, was reportedly also detained in Teseney town.

The reasons behind the detention of the bishop and the two priests are unknown.

It comes amid recent intensified military mobilisation by the government, which is hunting draft dodgers to join the war in neighbouring Ethiopia. The Eritrean government has sent troops to help Ethiopia against forces from its northern Tigray region bordering Eritrea.

Recently, there has been growing public discontent over Eritrea's involvement in the conflict.

The Catholic bishops have repeatedly called on the Eritrean government to nurture an inclusive democracy and end authoritarian behaviour. The government has been unhappy with the Catholic Church's calls for political reform.

In 2019, the authorities shut Catholic-run schools and hospitals, saying they were imposing regulations that stipulate that religious bodies cannot run such institutions.

Catholics make up about 4% of Eritrea's population. The church is one of only four religious groups allowed to operate in Eritrea, along with the Eritrean Orthodox, Evangelical Lutheran, and Sunni Muslim groups.

The country, led by President Isaias Afwerki for the past 30 years, does not have any functioning constitution and has never held a national election.