Seven victims in the eastern city were civilians, and three were UN personnel.

•There has been a recent upsurge in violence in the area, as locals accuse the UN of being ineffective. 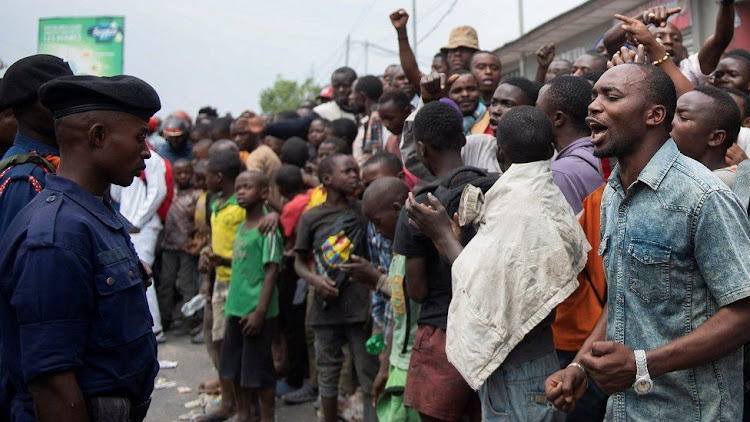 Protesters have been calling for the UN mission to leave the country
Image: BBC

Ten people have died during protests against a UN peacekeeping force in Butembo in the Democratic Republic of Congo, police and UN officials say.

Seven victims in the eastern city were civilians, and three were UN personnel.

Local media said the protesters were shot by peacekeepers - a claim denied by the UN mission, Monusco.

Monusco's acting head Khassim Diagne told the BBC there were "very organised groups... overwhelming our bases, and shooting down our helicopters".

But he stressed that "the UN hasn't fired at any protesters".

Mr Diagne said Tuesday's attackers were "criminals" masquerading as protesters, who claimed they wanted to submit a memorandum - but then opened fire as they approached the UN base.

There has been a recent upsurge in violence in the area, as locals accuse the UN of being ineffective.

The east of DR Congo remains volatile with more than 100 active rebel groups.

This was the second day of protests with people calling for the UN to withdraw its peacekeepers from the area.

On Monday, the demonstrations, called by the government's youth wing, turned violent when protesters stormed and looted the UN mission's local headquarters and a base in the city of Goma.

At least five people were killed, officials said. Then on Tuesday the protests intensified.

"They are teargassing us because we came to say that Monusco does not help us. They've been in Congo for 22 years and nothing works," protester Anselme Musimbwa said.

Another demonstrator, Jack Sinzahera said: "We have our own police that will look after our security and property, we don't want anything to do with Monusco."

One of the graphic images shared on social media showed someone lying still on the ground, while others shouted that he had been shot dead by the UN forces.

On Monday, Mr Diagne said it was "not in chaos and confusion or division that we will make progress towards stabilisation and peace.

"[Monusco] stands alongside the people and supports the national defence and security forces in their fight against the armed groups."

There have been protests against the UN over the years in Goma and other towns in the east of the country, but not on this scale or level of violence.

A UN peacekeeping force has been in DR Congo for more than two decades. Monusco took over from a previous UN mission in 2010.

But critics point out that in that time rebel activity has not ended and people in the region continue to live in a state of insecurity.

Monusco currently has almost 18,000 personnel in the country, including more than 12,000 soldiers - Pakistan, India and Bangladesh have provided the largest number of troops. It is preparing to draw down - though no date has been set.

There has been an uptick in the conflict there involving several armed groups including the M23 movement and the Allied Democratic Forces.

The government said it has asked the army and police to restore calm in Goma.