Activists say South Sudan is not ready for free, fair elections, given failure to implement the peace agreement.

• Chairman Gituai says the commission would like the transition government to fast-track the consideration and adoption of the agreed final roadmap.

• This comes a week after claims that President Salva Kiir is seeking to extend the deadline of the transition period. 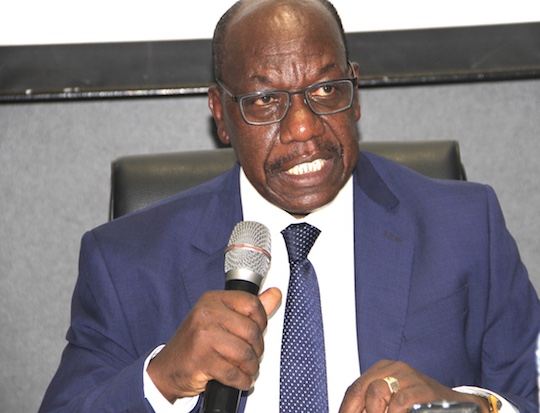 The Reconstituted Joint Monitoring and Evaluation Commission has called for the fast-tracking of the implementation of the final roadmap of the South Sudan peace agreement.

Speaking during the 23rd meeting of the RJMEC on Thursday, Interim chairman and designate Kenya's ambassador to IGAD Maj Gen Charles Gituai said the commission would like the transition government to fast-track the consideration and adoption of the agreed final roadmap.

This comes a week after claims President Salva Kiir is seeking to extend the deadline of the transition period.

On Friday, President Kiir met the four-member committee of Cabinet Affairs minister Martin Elia Lomuro, Information minister Michael Makuei, Foreign Affairs minister Mayiik Ayi Deng and security adviser Tut Gatlauk Manime, who presented him with a roadmap towards what the government website said was " the end of the transition period".

But a Nairobi-based consultant on the South Sudan peace process, who did not want to be named due to the sensitivity of the matter, said there is talk of Kiir's attempts to extend the transition process, citing some opposition figures who are against the move.

In March this year, human rights activists told the UN South Sudan is not ready for free, fair elections, given failure to implement the  peace agreement.

Elections in 2023 are part of the implementation of the peace agreement.

Earlier this month on July 9, the United Nations Mission in South Sudan called on South Sudanese leaders to redouble efforts to agree on a roadmap to pave the way toward free, fair and credible elections.

Nicholas Haysom, the special representative of the Secretary-General for South Sudan, said the  upcoming months will be critical as the transitional period approaches its end in February 2023.

“Now is the time for national leaders to redouble their efforts to agree on a roadmap – with clear benchmarks, timelines, and priorities – to pave the way toward free, fair and credible elections,” Haysom said in a statement issued in Juba, the capital of South Sudan, on the eve of the independence day.

RJMEC also urged the government to urgently set the date for the graduation and redeployment of the unified forces and the commencement and the Disarmament, Demobilization and Reintegration process.

Additionally, Gituai also called on  the South Sudanese authorities to seriously address the increasing incidences of community-based violence across the country.

"We urge the RTGoNU to urgently institute mechanisms for fast-tracking procedures for the import and customs clearance of relief materials and visa renewal processes for humanitarian workers to improve access to those in dire need," he said in the statement.

He also appealed to partners and friends of South Sudan to continue supporting RJMEC and the Ceasefire and Transitional Security Arrangements Monitoring and Verification Mechanism, as well as the full implementation of the Revitalised Agreement on the Resolution of the Conflict in the Republic of South Sudan (R-ARCSS).

Gituai also called on the government to allocate adequate funding for the implementation of the peace agreement, including to the nationals within the mechanisms, service delivery, livelihoods and constitution-making process in the 2022-23 budget.

He expressed his concern that July marks seven months to the end of the transition, there were many aspects of the agreement that were still pending.

"By now, you should have all received our comprehensive evaluation report on the status of implementation of the Revitalized Peace Agreement from the beginning of the Transition Period to the end of June 2022," he said.

"Critical tasks, including some pre-transitional tasks, like the unification of forces, are still pending," he added.

The chairman said they had as early as December 2021 urged the government to develop a clear roadmap with a strategy to implement the critical pending tasks of the agreement.

"Then in our 21st plenary held on 10 February 2022, I presented a chapter-by-chapter status of implementation report in which I again stressed the need for a clear strategy going forward. At that meeting, the RTGoNU representative expressed the commitment of the government, to develop a roadmap towards elections at the end of the Transitional Period," he said in the statement.

Kalonzo still jobless while his dominance of Ukambani under threat