• Bobi Wine said he feared this would happen in the elections set for 2026.

• Muhoozi gave the clearest signal yet of his interest to succeed his father during his 48th birthday celebrations in April this year. 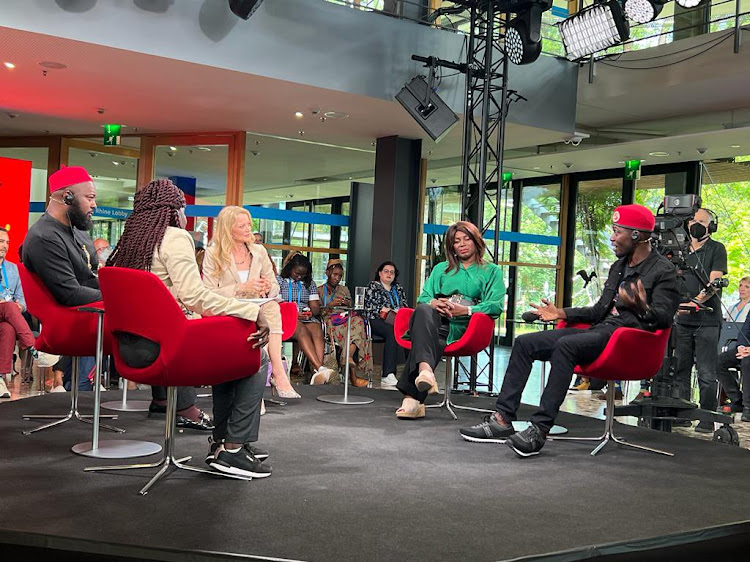 Ugandan politician Robert Kyagulanyi aka Bobi Wine speaks at the DW Global Media Forum session on 'Creatives from Africa: To stay or to go' on Tuesday, June 22. 2022 in Bonn Germany
Image: ELIUD KIBII

Responding to a question by the Star on what he thinks of the talk that President Museveni's son, Lt Gen. Muhoozi Kainerugaba, could be joining politics, Kyagulanyi said, "They want to establish a monarch. That's what they are doing".

The musician-cum-politician and popular by the stage name Bobi spoke to the Star on the sidelines of the DW Global Media Forum in Bonn, Germany.

Bobi Wine said he feared this would happen in the elections set for 2026.

Muhoozi gave the clearest signal yet of his interest to succeed his father during his 48th birthday celebrations in April this year.

“When Team MK wins power in this country, which we will, our first action will be to increase the sports budget. Team MK will announce our political programme soon,” Gen Muhoozi said on Twitter.

This is, however, not the first time that talk of him being groomed to take over from his father is coming forward. Former spymaster and now Gen (Rtd) David Sejusa, in 2013, said President Museveni was grooming his son to succeed him when he retires. They both denied it.

But even so, Bobi Wine said they are working day and night to see the end of Museveni's rule.

"There is always a rise and fall of a dictator. There is no rise and rise of a dictator ... We already know his rise, we are working day and night to see his fall," Bobi Wine told the DW Global Media Forum session on 'Creatives from Africa: To stay or to go'.

"Uganda continues to be under a tight military rule of General Yoweri Museveni, who took power when I was only four years and now I am 40 and there is no sign there will be a change.

"We don't want change for the sake of it. We want to return power to the people. That's why they call us the people power movement," Bobi Wine of the National Unity Platform party added.

He also said that his red beret, "like the word freedom, like my face" has been banned in Uganda not based on any law but "because Museveni and his son just don't want it".

Asked what he would do to promote culture if he wins the presidency, Bobi Wine said he would ensure there is freedom.

"If there is freedom, culture will flourish," he said.

The DW Global Media Forum offers an interdisciplinary platform for media professionals as well as decision-makers from politics, civil society, culture, education, business and science from all over the world to get together and to learn from each other as part of an intercultural exchange since 2008.

This year's forum between June 21-22 explored opportunities to foster resilient journalism in times of crisis.

Lt Gen Muhoozi put out a tweet saying he had resigned; the army later said he had not.
News
2 months ago

Soldiers and police were out in force patrolling Kampala.
News
1 year ago

Bobi Wine says military has blocked him from leaving compound

Museveni headed for resounding win.
News
1 year ago
WATCH: The latest news from across Africa
by ELIUD KIBII Subeditor and writer
Africa
25 June 2022 - 18:37