Mpiranya was head of presidential guard and was accused of ordering murder of then-Prime Minister.

•Protais Mpiranya was head of the presidential guard and was accused of ordering the murder of the then-Prime Minister, Agathe Uwilingiyimana.

•His officers also murdered the 10 Belgian UN peacekeepers guarding her. 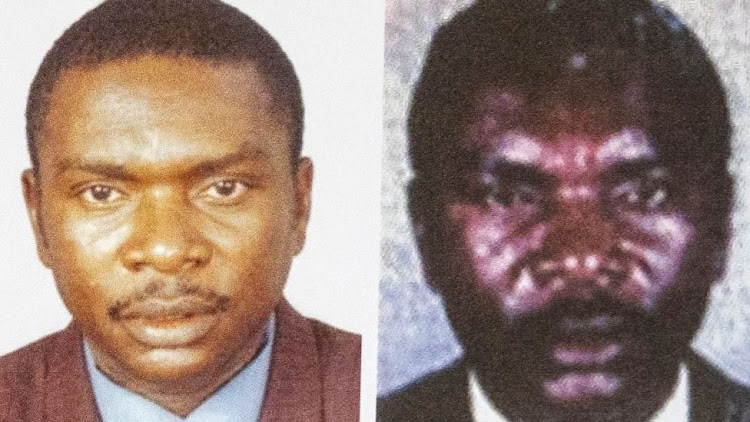 This was Protais Mpiranya's image on a wanted poster for genocide fugitives
Image: AFP

The death has been confirmed of the last major Rwandan fugitive indicted by a war crimes court for his role in the 1994 genocide.

Protais Mpiranya was head of the presidential guard and was accused of ordering the murder of the then-Prime Minister, Agathe Uwilingiyimana.

His officers also murdered the 10 Belgian UN peacekeepers guarding her.

Investigators tracked him down to Zimbabwe, where a recently exhumed grave confirmed he had died in 2006.

They found that Mpiranya had used various aliases whilst on the run to evade capture for over 12 years.

In the immediate aftermath of the genocide - in which about 800,000 ethnic Tutsis and moderate Hutus were killed by ethnic Hutu extremists in 100 days - he moved to Cameroon.

Others accused of taking part in the genocide had fled over the border to the Democratic Republic of Congo, forming a rebel group known as the FDLR.

Mpiranya joined them in 1998, commanding a brigade that fought alongside Zimbabwe's army, which had become embroiled in a conflict in DR Congo involving several nations often dubbed "Africa's world war".

He adopted the name Alain Hirwa and became known as "Commander Alain" - and was well respected by senior Zimbabwean officers, the investigation found.

It was his Zimbabwean allies who organised refuge for him in Zimbabwe's capital, Harare, after his indictment was made public in 2002 by the international tribunal set up to bring to justice those responsible for the genocide.

He was charged with eight counts, including genocide, murder and rape, for "having instructed, supervised, encouraged, and assisted the crimes" carried out by the presidential guard.

The "challenging and intensive" investigation to track him down was conducted by a UN body that handles outstanding war crimes cases for Rwanda and Yugoslavia.

"For the victims of his crimes, Mpiranya was a feared and notorious fugitive, leader of the presidential guard during the genocide and later a top commander in the FDLR," said the prosecutor of the International Residual Mechanism for Criminal Tribunals (IRMCT), Serge Brammertz.

"Confirming his death provides the solace of knowing that he cannot cause further harm."

According to the IRMCT, during his four years in Zimbabwe, Mpiranya ran a business with his sister-in-law and was still connected with FLDR associates - and had a Ugandan passport under the name James Kakule.

His wife and daughters went to live in the UK, but visited him in Harare.

When he fell seriously ill in 2006, aged 50, with tuberculosis he was using the name Ndume Sambao - and this was the name on his gravestone when he was buried in a cemetery outside Harare.

"Since October 2006, Mpiranya's family and associates have gone to great lengths to conceal his death and place of burial," the IRMCT said.

How did the Rwandan genocide unfold?

On 6 April 1994, a plane carrying then-President Juvenal Habyarimana - a Hutu - was shot down, killing all on board.

In a well-organised campaign of slaughter, militias were given hit lists of Tutsi victims. Many were killed with machetes in acts of appalling brutality. Little was done internationally to stop the killings.

Eventually the RPF, backed by Uganda, marched on the capital Kigali. Some two million Hutus fled, mainly to DR Congo.

Dozens of Hutus were convicted of roles in the killings by the International Criminal Tribunal for Rwanda, based in Tanzania, and hundreds of thousands more faced trial in community courts in Rwanda.

"They have repeatedly provided false statements to investigators, and coached those who knew of Mpiranya's presence and death in Harare to lie if questioned. His tombstone was purposefully designed to thwart its discovery."