He is facing at least 40 contenders in the race for Villa Somalia, the seat of power in Mogadishu

• Maahaay says he is running for President of Somalia to bring change to the country.

• He, however, needs 138 votes from the Somalia Parliament to win the election 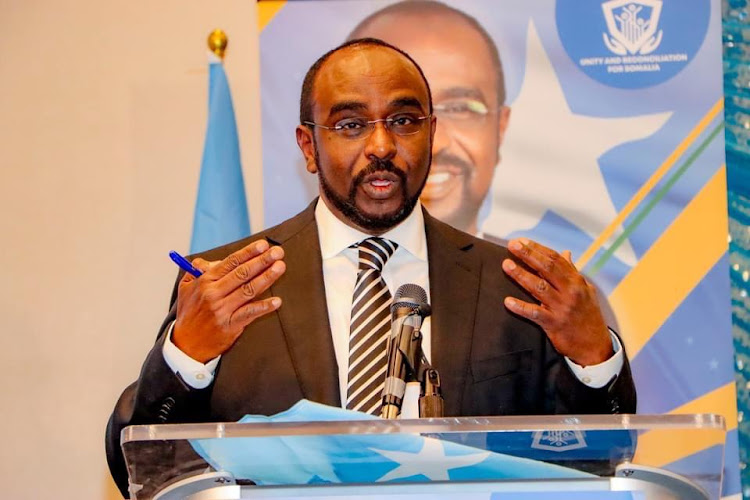 Following the swearing in of newly elected MPs to the 11th Parliament on April 14 after a two-year delay, focus now shifts to the presidential race.

The Lower House and the Senate will vote for the next president of Somalia after attempts to restore universal suffrage after more than 50 years failed.

The latest entrant to the already crowded race is Abdi Maahaay, a Minnesota-based philanthropist and executive director of Somali American Healthcare Foundation.

Maahaay says he is running for president to bring change to the country. He, however, needs 138 votes from the Somalia Parliament to win the election, a daunting task for a newcomer in the country’s politics — although he had expressed interest in the race in 2017.

Maahaay faces at least 40 contenders in the race for Villa Somalia, the seat of power in Mogadishu.

“I am confident Somali MPs will make the right choice. I believe they are highly ethical and despite alleged vote bribery in the past, this is the year they will choose someone they know he can deliver. A new face like me.

“I have what it takes to bring change to Somalia,” Abdi told the Star in an earlier interview in Nairobi before heading for his presidential bid launch in Mogadishu.

For more than two decades, Maahaay said he has been on a mission to provide comprehensive healthcare services throughout Somalia to the poor.

He is known in Somalia and the diaspora for his life saving medical airlifts and facilitating surgical operations for Somalis suffering from birth defects, injuries sustained from the armed conflict and other physical deformities such as conjoined twins, tumors, blindness, fistula and child rape victims.

“Over the years, I have managed to have 620 surgeries in Mogadishu; 120 in KIjabe and Nairobi, Kenya; 20 in India; three in Pakistan; two in the Philippines and one in Ukraine.

"Six of the cases required the world's most advanced surgical technologies and skills such as separating conjoined twins and were performed in the US.” Maahaay said.

“It gives me joy to see the two survivors of the conjoined twins go about their daily lives as normal kids. One is 14 years old in high school and the last twin is at an elementary school in Minnesota," he said.

The candidate observed that it is the right of every Somali to access comprehensive healthcare "but leaders have failed".

"This is what has pushed me to want to be the President of Somalia. To bring what I have brought to these few individuals to a national level,” he added.

One of the mothers of conjoined twins that went through surgery said Maahaay has devoted his life to the well-being and uplift of the Somali people.

“He is a practical man with the heart and willingness to see Somalis emerge from the devastating effect of the civil war. I am glad to see him joining the race for the presidency. He is what Somalia needs. I wish him all the best,” she said, adding that her children were doing well.

Maahaay says his administration’s priority number one will be to deal with al-Shabaab and restore peace and stability. He observes that the Somalia National Army has no influence past Mogadishu.

“Back in 1985, I travelled from Mogadishu to Hargeisa by road. Today, I cannot even get to Afgoye, Garbaharey or Jowhar by road. I will do whatever it takes to end the al Shabaab menace. I will be open to every opportunity to make Somalia a stable country. Once we work on security, we can focus on infrastructure, economy and regional cooperation,” he said.

Among other priorities include introduction of wind power energy in southern Somalia and reviving the now-defunct sugar industry that once flourished in the Horn of Africa country.

“Somalis are enterprising and despite the civil war, the diaspora has been vital in the growth of the economies of Dubai. Look at Eastleigh in Kenya and Minnesota in the US,” the candidate said.

Somalia used to feed the Gulf States and Middle East. Today, we have been turned into beggars for relief aid from the international community and dying from hunger. Drought is a recurring problem that can be resolved by good leadership. But the leaders have failed the Somali people

He was also to travel to Mogadishu to organize assistance to 4.5 million Somalis affected by drought and 700,000 others displaced, a situation he blames on the current leadership.

“Somalia used to feed the Gulf States and Middle East. Today, we have been turned into beggars for relief aid from the international community and dying from hunger. Drought is a recurring problem that can be resolved by good leadership. But the leaders have failed the Somali people,” he said.

How will Abdi manage to face a well oiled machine run by an incumbent president and the experience of two ex-presidents and an ex-premier?

American lawyer and political strategist Robert Bennett, who is managing his campaign, believes Somali MPs may this time opt for a “compromise candidate” amid the current bitter rivalry and split in Somalia.

“I worked with ANC for many years and served as key organiser post-apartheid in 1994 after the release of Nelson Mandera.  I see so much in familiarity with Abdi. Both are committed to their people, not self-seeking. He is in the race to bring change.

“Mandela faced formidable challenges from fellow blacks in the first post-apartheid election and was actually chosen as a compromise black candidate. Abdi is in a similar scenario. With the current political tension that has split the country, he may turn out to be the compromise candidate,” Bennett said.

He added that Maahaay is experienced in marshaling national and international support, which would have helped in dealing with the ongoing drought.

“He has done a lot as a private citizen. Imagine what he can do as the President of Somalia,” Bennett posed.

Somalia is witnessing election-related political standoffs that followed the expiry of President Farmaajo’s term on February 8, 2021 after which the opposition declared that they no longer recognize his administration.

The second standoff came after Farmaajo curtailed Prime Minister Mohamed Roble’s powers over alleged fraud, causing the opposition to marshal behind the premier.

Maahaay and his supporters peg their hopes on this split to garner the 138 votes to win the election.

"We can be a leading country in Africa. Rwanda did it by emerging out of the ashes. We can do it if we have good leadership. We can make that change,” Maahaay concluded.

This article has been updated to correct Bennett's role in ANC

Only a few thousand people vote for a parliament that would represent the nation of around 16.3 million.
News
7 months ago

Somalia's newly elected MPs set to be sworn in

They will be sworn in at a venue inside the main airport area - one of the highly guarded areas in the capital.
News
7 months ago

There have been tensions between the Somalia federal government and Jubaland
News
7 months ago
Post a comment
WATCH: The latest videos from the Star
by ELIUD KIBII Subeditor and writer
Africa
24 April 2022 - 21:00
Read The E-Paper