•The President Tshishekedi said the institution would help with research, management and optimization of natural resources of the region.

• He added that the agency will play and important role in implementing projects in the Agenda 2025 for Africa. 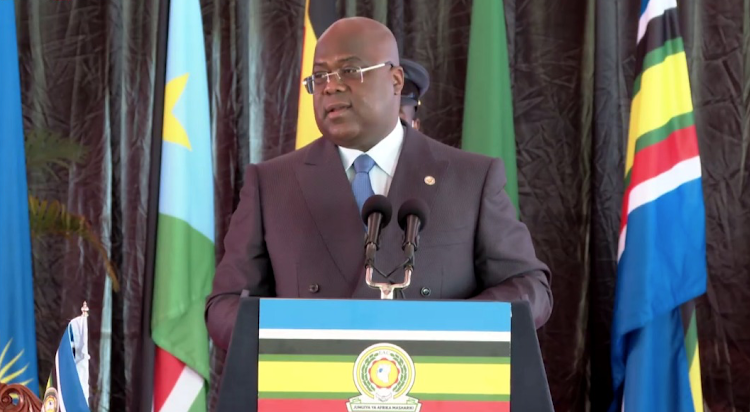 DRC President Felix Tshishekedi during the signing of the Treaty of Accession of DRC to the EAC at State House Nairobi on April 8, 2022
Image: PSCU

DRC  has reiterated the desire for the creation of a mining and natural resources organ of the East African Community.

Speaking on Friday when EAC Heads of State signed the Treaty of Accession of DRC to the EAC, President  Felix Tshishekedi repeated his country’s desire for the formation of an institution that is solely focused on mining, natural resources and energy. He proposed it be based in Kinshasa.

The President said the institution would help with research, management and optimization of natural resources of the region. He added that the agency will play and important role in implementing projects in the Agenda 2025 for Africa.

President Tshisekedi also observed that the agency would help in mitigation against climate change.

It also has Lithium deposits, which estimated at over 130 million tonnes in the southeast.

With this proposal, DRC appears to kick the ball rolling and taking charge of the EAC Chapter 19 on cooperation in natural resources and environment management.

Article 114 of the EAC Treaty requires that for cooperation in environment and natural resources management, member states agree to take concerted measures to cooperate in sustainable utilisation of natural resources for their mutual benefit.

“With regard to the management of the mineral resources sector, the Partner States agree, inter alia, to promote joint exploration, efficient exploitation and sustainable utilisation of shared mineral resources,” the treaty reads in part.

“However, forest loss rates have accelerated in recent years, and in 2020, the DRC lost 1.31 million ha of natural forest, equivalent to 854 million tonnes of CO₂ of emissions. This has had deleterious environmental impacts (including on climate change, biodiversity, and rainfall patterns) and is threatening the livelihoods of the 35 million people who depend on forest resources,” World Bank says in the report.

World Bank’s partnerships in energy sector investments have focused on rehabilitating hydropower plants and transmission networks, increasing Inga’s electricity production by 632 MW and augmenting power supply to mines, but with limited investment in the distribution network segment, it says.

However, due to insecurity since the civil war, DRC has struggled to maximize on the resources, especially mines.

On March 29, when DRC was admitted to the EAC, President Tshishekedi said: “It is the desire of DRC to see the creation of a new organ in the EAC that is solely focused on mining, natural resources and energy that will be based in Kinshasa”.

DRC was admitted to the community at the virtual 19th Summit of the EAC Heads of State following recommendation by the Council of Ministers.

The Summit chairman and Kenya’s President, Uhuru Kenyatta, said DRC had met all the set criteria for admission as provided for in the treaty for the establishment of the EAC.

“We have concluded the regional processes for admitting new members as provided for in our rules of procedure. Admitting DRC into EAC is historic for our community and the African continent at large.

“It demonstrates the agility of the community to expand beyond its socio-cultural boundaries to new people and trade-centred partnerships and collaboration, thus increasing trade and investment opportunities for the citizens,” President Kenyatta said at the time.

The next step was the signing the Treaty of Accession, which was to be done before April 14.

DRC now has until September 29, 2022 to undertake its internal and constitutional processes to ratify the treaty and submit to the secretary general of the community the instruments of ratification.

Subsequently, DRC will join all the programmes and activities in line with the four EAC pillars of regional integration.

Kenyatta challenged DRC to fast track the process, to which President Tshisekedi promised to do to ensure the process is complete in his first term as President. DRC holds presidential elections next year.

Tshishekedi termed the admission as a historical day for DRC, saying it paves the way for the harmonization of the country’s policies with those of the EAC.

Having been designated as the signatory, President Kenyatta and his DRC counterpart signed the treaty in Nairobi on Friday.

"Inclusion of DRC into the community will put EAC in a better position to combine resources to develop the much needed infrastructure, especially the main transit corridors running from East to West," President Kenyatta said.

According to the communiqué, the presidents said the entry of DRC was beneficial to the people of DR Congo as well as the community.

President Tshisekedi said the admission was the fulfillment of dreams held by the country’s ancestors more than 60 years ago, and that it marked a shift in the country’s foreign and economic policy.

"Our admission to EAC not only helps our country economically, but also strengthen our peace and security within DRC and the region,” President Tshisekedi said.

He said with DRC’s demographic, more than 80 million people, and its geo-strategic position, his country’s admission in the community offers many comparative advantages important for sustainability and continuity of the region in terms of the widening of the market.

DRC's admission as a full member will boost the common market's annual economic output by a quarter.
News
1 month ago

President Uhuru commended the move by the DRC terming it as a historic event.
News
1 month ago

EAC heads of state approved the admission of DR Congo into the bloc on Tuesday.
News
1 month ago

Swahili becomes the first African language to be so recognized by UNESCO.
Opinion
2 months ago

Kenyans to benefit after DR congo admission to EAC

Kenya’s products will be subjected to zero tariffs, tipping businesses for opportunities
News
5 months ago
WATCH: The latest news from across Africa
by ELIUD KIBII Subeditor and writer
Africa
09 April 2022 - 05:00