• Among the tasks he outlined include failure to ratify key laws and state governments function properly; delay in uniting the forces 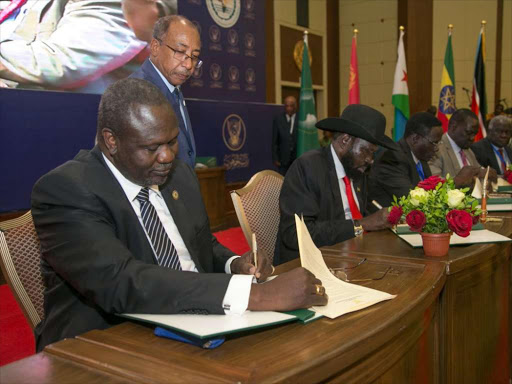 A key regional commission is concerned by the delay in implemention of the South Sudan peace agreement one year to the deadline.

With just a year left for the transitional period, critical tasks of the revitalised agreement remain unimplemented, the Reconstituted Joint Monitoring and Evaluation Commission said.

“There is now just 12 months left of the transitional period, and elections are due to take place 60 days before it ends, and yet key unimplemented tasks are outstanding,” RJMEC interim chairperson Maj Gen Charles Gituai said on February 10 in Juba..

Among the tasks he outlined include failure to ratify key laws and state governments function properly; delay in uniting the forces, lack of the Special Reconstruction Fund and failure to resettle millions of South Sudanese who are in refugee camps outside the country or in IDP camps.

The chairperson also said the public financial management reforms are undone; the transitional justice mechanisms are not established; and that beyond the drafting of its legislation, the constitution-making is not 0n track.

“At this crucial stage of implementation, and with such a comparatively short time left in the transitional period, your insights on the challenges facing South Sudan are vital,” he said.

In his recommendations, Gituai urged the Reconstituted Transitional National Legislative Assembly (TNLA) to expedite the enactment of the pending security, political parties and constitution making bills.

He also urged RTGoNU to make financial resources available for the completion of the transitional security arrangements, including redeployment of unified forces, as well as for DDR [Disarmament, Demobilization and Reintegration] programmes.

On the humanitarian situation in the country, Gituai urged the government to work closely with international partners to establish the Board of the Special Reconstruction Fund, in line with the recent African Union Peace and Security Council meeting resolutions.

“This is especially important, he said, considering the humanitarian and reconstruction challenges facing the country, including the continued need for aid for flood-affected communities,” the JMEC statement said.

Gituai noted that the living conditions of flood-affected people in displacement sites remain dire, and are likely to further deteriorate with the onset of seasonal rains.

“There are many hundreds of thousands of flood-affected people requiring humanitarian assistance,” the chairperson added.

Further, there are other outstanding tasks in governance, including the restructuring and reconstitution of the commissions and institutions at the national level and the establishment of the ad hoc Judicial Reform 4 Committee.

In regards to the transitional security, particularly the screening, training and redeployment of the Necessary Unified Forces for Phase One, Gituai expressed his disappointment, saying progress remains “very slow”.

“Since my last report, I have been informed that the three JDB Implementation Committees have undertaken their screening and selection tasks in the Training Centres. I look forward to receiving an update from the JDB at this meeting,” he said.

He also noted that the transition government is not funding DDR, despite the process being integral to the successful implementation of the security arrangements.

These were the attack, rape and abduction of civilians in August 2021 attributed to the National Salvation Front (NAS) lead by Thomas Cirillo, the killing and detention of civilians during clashes between South Sudan People's Defence Forces (SSPDF) and NAS forces on September 5, 2021; forced recruitment of civilians by the SPLA/IO between October and December 2021; and an attack on an SSPDF Barracks by NAS forces in November 2021.

He said he was concerned about continuing community-based violence, which worsened with the attacks and loss of lives in Baidit Payam, outside of Bor, Jonglei state.

“The resulting displacement of civilians in incidences of such violence, and the added need for and strain on the delivery of humanitarian services, is worrying. I urge the RTGoNU to undertake measures to address the cycles of violence across the country and build durable peace,” he said.

The RJMEC chairman said he had written to the Chiefs of Defence Forces of SSPDF, the SPLA-IO, and NAS to remind them of their responsibilities and to urge them to take action against perpetrators.

The summit particularly cited Chapter II on the National Unified Forces and mobilization of funding to accomplish the process.

In the draft communiqué, the AU leaders also urged the international community to provide support in the implementation of Chapter II to consolidate the progress made by the South Sudan government.

Additionally, the AU appealed to the international community to lift the arms embargo and other sanctions imposed on South Sudan and directed the AU Commission to continue to provide support towards the successful implementation of the peace deal, including deploying technical expertise on the DDR) and security sector reform.

Part of the reform is dispatching a Post-Conflict Needs-Assessment Mission to South Sudan in identifying priorities and the required resources for the rebuilding of the country; in particular.

Ugandan President Yoweri Museveni offered to host in Kampala the South Sudan Leadership Retreat to facilitate the successful implementation of all outstanding provisions of the peace deal.

Saturday,January 12 marked the half–way stage of the eight–month Pre–Transitional period of the Revitalised Agreement on the Resolution of the ...
Siasa
3 years ago
by ELIUD KIBII Subeditor and writer
Africa
11 February 2022 - 22:00