Sanctions have left the landlocked country isolated as neighbours have canceled flights.

• The Malian government has said the Russians are instructors who came with equipment bought from Russia.

• A military junta seized power in a 2020 coup and initially agreed to hold elections this February. 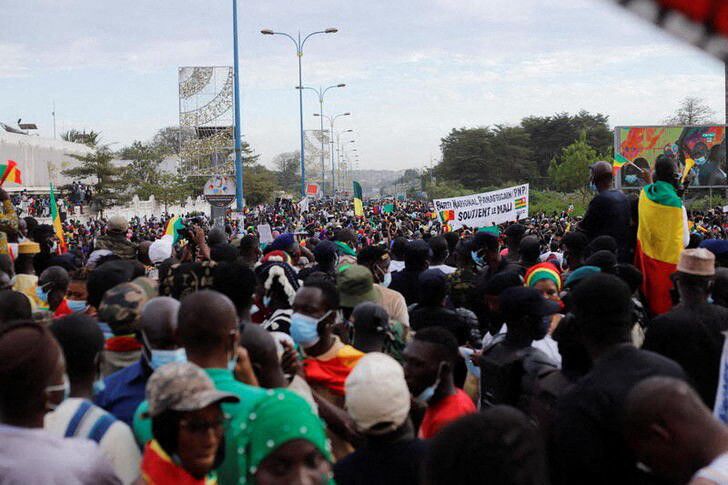 Thousands of people demonstrated in the Malian capital Bamako on Friday against sanctions imposed by neighbouring countries on the transitional military government for trying to extend its hold on power.

People poured into Independence Square, holding up signs saying "Down with ECOWAS" and "Down with France", to protest restrictions imposed by the Economic Community of West African States and backed by former colonial master France.

A military junta seized power in a 2020 coup and initially agreed to hold elections this February. It has since backtracked and recently proposed a new date of December 2025.

The move has drawn international condemnation, but many Malians continue to support interim President Assimi Goita, an army colonel whose overthrow of Ibrahim Boubacar Keita was widely popular.

"I am here to say that Mali is first for Malians, it's not ECOWAS or France who are going to make decisions in our place," said Adama Cisse, a 40-year-old teacher in the crowd.

The sanctions have left the landlocked country isolated as neighbours have canceled flights, closed borders, and cut off its access to regional financial markets.

Western powers have voiced support for ECOWAS's actions, and the European Union said on Thursday it would also impose sanctions.

Mali was already in a spat with Western allies, who accuse it of hiring Russian private military contractors to provide security services.

The Malian government has said the Russians are instructors who came with equipment bought from Russia.

Speaking at the rally, Prime Minister Choguel Maiga praised Russia and China for blocking a proposed statement at the U.N. Security Council this week, backed by Western and African countries, endorsing the ECOWAS sanctions.

"Today Russia and China are opposed to the illegal and illegitimate embargo against our country and our people," Maiga, dressed in military fatigues despite never having served in the armed forces, told the crowd.

French troops have been deployed to Mali since 2013 to help fight Islamist militant groups linked to al Qaeda and Islamic State. The U.N. peacekeeping mission MINUSMA also has about 12,000 troops in Mali to try to contain the violence.

In a further sign of fallout, Sweden on Friday said it would review its contribution to the U.N. peacekeeping force in addition to withdrawing its forces this year from a European special forces mission in Mali, as previously planned.

Opposition parties in Mali have also criticised the transitional government for delaying elections and laid the blame for the sanctions at its feet.