The money will support aid agencies providing protection and other life-saving assistance.

•A year of fighting in Ethiopia between Tigrayan rebels and government forces has left hundreds of thousands in famine-like conditions.

The United Nations said Monday it had released emergency funds to help provide life-saving humanitarian assistance and protection to civilians caught up in Ethiopia's spiralling conflict.

UN aid chief Martin Griffiths said he had released a total of $40 million aimed at scaling up emergency operations in the Tigray region and the rest of Ethiopia's conflict-hit north, and as an early response to drought in the south of the country.

"Millions of people in northern Ethiopia are living on a knife-edge as the humanitarian crisis is growing deeper and wider," said Griffiths, who just returned from a visit to Ethiopia.

"Across the country, needs are rising."

A year of fighting in Ethiopia between Tigrayan rebels and government forces has left hundreds of thousands in famine-like conditions. 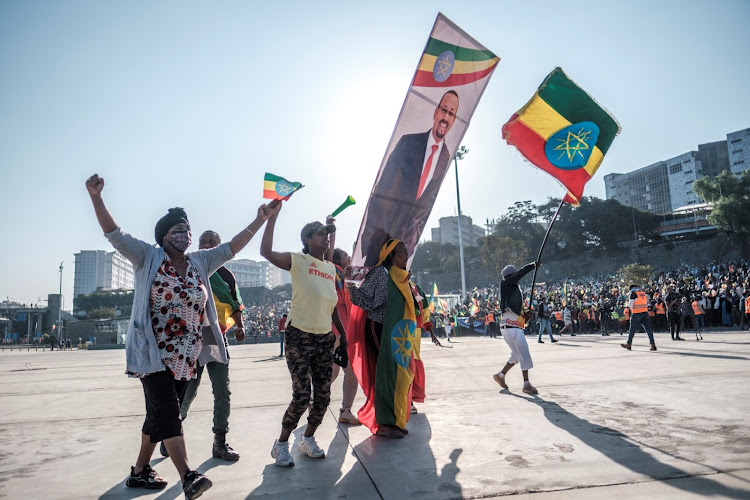 Demonstrators carry a banner with the portrait of the Primer Minister Abiy Ahmed during a rally in Addis Ababa, Ethiopia in support of the national defense forces, on November 7, 2021.
Image: EDUARDO SOTERAS/AFP

Though the 2019 Nobel Peace laureate vowed a swift victory, by late June the TPLF had retaken most of Tigray before expanding into the Amhara and Afar regions.

The TPLF, which has not ruled out a possible march on the Ethiopian capital Addis Ababa, is demanding an end to what the UN describes as a de facto humanitarian blockade on Tigray, with no aid permitted to enter the region in the past month.

In Tigray, Amhara and Afar, the money will support aid agencies providing protection and other life-saving assistance to those affected by the conflict, the statement said.

"Women, boys and girls continue to bear the brunt of the conflict, yet their protection needs remain underfunded," it said.

In the drought-hit southern Somali and Oromia regions meanwhile, the additional cash will help relief agencies to provide drinking water, including to prevent waterborne diseases like cholera, and to support preserving livestock.

Despite the new injection of funds, the UN said humanitarian operations throughout Ethiopia were still facing a $1.3-billion funding gap this year, including $350 million still needed to respond to the crisis in Tigray alone.