AU, Igad, the UN, the EU and Kenya have called for negotiation and cessation of hostilities

• Obasanjo is spearheading AU’s push to bring the TPLF and the Ethiopia federal government in to the negotiations table and cease hostilities in the one-year war.

Reda on Sunday said Gebremichael briefed the former Nigeria President on Tigray’s position on the ongoing crisis in Ethiopia.

“It was a good meeting,” Reda said without giving more information about the talks.

Obasanjo is spearheading AU's push to bring the TPLF and the Ethiopian federal government to the negotiating table and cease hostilities in the one-year war.

On Wednesday, AU Commission chairperson Moussa Faki Mahamat, in a statement, called for the immediate cessation of hostilities and the full respect for the life and property of civilians and state infrastructure. 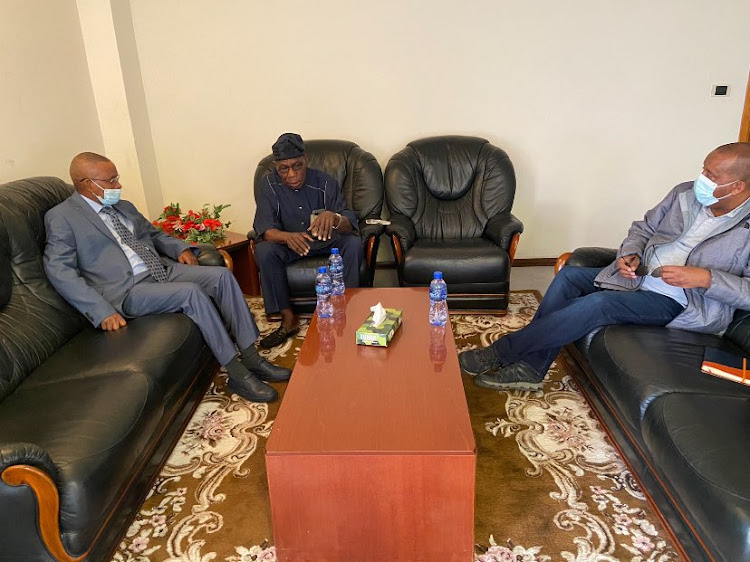 There is always a window of opportunity for a peaceful political solution to any armed conflict that should never be closed.

“The chairperson reminds the parties of their international obligations regarding compliance with international humanitarian and human rights law, with particular regard to the protection of civilians and ensuring access to humanitarian assistance by communities in need,” he said.

Igad, the UN, the EU and Kenya have also called for negotiation and cessation of hostilities.

On Thursday, Igad executive secretary Workneh Gebeyehu called for the cessation of hostilities and immediate ceasefire in Ethiopia, urging parties to show restraint, deescalate tensions and resolve their differences through an "all-inclusive national dialogue and reconciliation".

The Ethiopian leader said in a tweet: “There is always a window of opportunity for a peaceful political solution to any armed conflict that should never be closed.

"Good discussion with Obasanjo, an experienced peacemaker, who was the first to come in November and now as the AU High Rep for the Horn of Africa."

It is a departure from Prime Minister Abiy Ahmed, who has rejected calls from AU and regional envoys for talks since the conflict began.

He maintains that it is a “law and order operation” and the “criminal TPLF clique must be crushed”.

The Sunday visit by Obasanjo coincided with that of the UN undersecretary for humanitarian affairs, who toured Mekelle in the northern region to assess the situation.

Martin Griffiths called for greater access for aid to civilians amid escalating clashes between TPLF and government forces.

Griffiths met with Tigray leaders and insisted on "the need for humanitarian access and protection of civilians through all areas under their control," the UN spokesperson said.

US Special Envoy for the Horn of Africa Jeffrey Feltman arrived in Ethiopia on November 5 for a two-day visit seeking to secure a ceasefire. It is not clear if he secured an audience with PM Ahmed.

On the same day, Secretary of State Antony Blinken called on the government of Ethiopia to halt its military campaign, including airstrikes in population centers in Tigray and mobilisation of ethnic militias.

“With the safety and security of millions in the balance and more than 900,000 facing conflict-induced famine-like conditions, we prevail upon all forces to lay down their arms and open dialogue to maintain the unity and integrity of the Ethiopian state,” Blinken said in a statement.

He called on parties to open ceasefire negotiations without preconditions to find a sustainable path towards peace.

“We call on the forces of the Tigray People’s Liberation Front and the Oromo Liberation Army to immediately stop the current advance towards Addis Ababa.  All parties must also allow and facilitate humanitarian access so that life-saving assistance can reach people in need,” he said.

Most of the infrastructure is being done on the Kenyan side, he says.
Business
7 months ago

"The said report is fake news and has no basis in fact nor form," Spokesman Kalondo.
News
7 months ago

GATERE: Troubled Horn of Africa with legacy of crises

As a result of the protracted conflicts, people Africa continue to experience untold suffering
Opinion
7 months ago

Ethiopia PM Abiy Ahmed ordered a six-month state of emergency and urged civilians to arm themselves against TPLF
Siasa
7 months ago
by ELIUD KIBII Subeditor and writer
Africa
08 November 2021 - 23:00