The infighting comes at a time when the country is readying itself for the delayed elections, which have divided the security forces.

• PM Roble on Sunday night suspended Yassin over the death of female intel officer Ikran Tahlil, who was kidnapped on June 26 and later killed in unclear circumstances.

• But moments later, President Farmaajo defended Yassin, and told him to continue with his work, contradicting the Prime Minister. 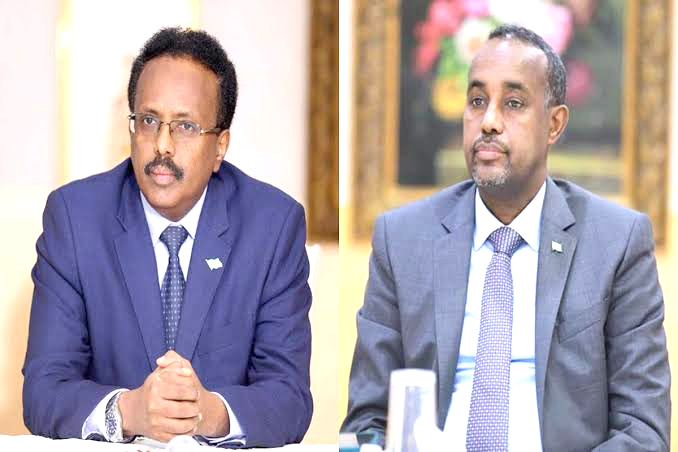 The Somalian government is on edge following a power struggle between President Mohamed Farmaajo and Prime Minister Mohamed Roble over changes in the country’s security apparatus.

It started with the sacking of national intelligence chief Fahad Yassin, followed by changes in the Internal Security ministry.

PM Roble on Sunday night suspended Yassin over the death of female intel officer Ikran Tahlil, who was kidnapped on June 26 and later killed in unclear circumstances. Yassin is seen as a key player in Farmajo's reelection bid.

Roble further accused Yasin of intransigence in sending a clear report on the killing of Tahlil and mixing politics and security. He appointed former NISA chief Major General Bashir Mohamed Jama as the intelligence director in an acting capacity.

But moments later, President Farmaajo defended Yassin and told him to continue with his work, contradicting the Prime Minister.

In a statement released by Villa Somalia, the seat of the President, Farmaajo termed PM Roble’s decision illegal and unconstitutional.

President Farmaajo appointed Yassin in August 2019 in a major shake-up of the security apparatus. He also instructed Prime Minister Roble and the Council of Ministers to “effectively fulfill their responsibility to complete the electoral process”.

The infighting comes at a time when the country is readying itself for the delayed elections scheduled for October. The polls, which were earlier set for February 8, have divided the security forces.

It all started on June 26 when Tahlil, a young female intelligence officer, went missing and the family accused the National Intelligence and Security Agency of being responsible for her disappearance.

The 24-year-old was abducted near her home in Mogadishu’s Abdulaziz district, close to the NISA headquarters.

The Intelligence agency accused al Shabaab of the killing, claims denied by the terror group.

Consequently, Prime Minister Roble asked the NISA chief for an explanation in 48 hours.

The power struggle triggered a debate on the constitutionality of Roble’s action, with some arguing the PM has no powers to appoint and fire the intelligence boss.

While the President’s camp says Roble's actions are unconstitutional, the PM cites Farmaajo’s directive transferring election and security responsibilities to him.

In a move that appeared to give in to Roble, Farmaajo appointed Yassin as the national security adviser to the President on Wednesday.

Two-time PM  Sharmarke tweeted, “On grounds of defiance and contempt, the PM within his constitutional powers can dismiss a cabinet minister, down the line, to heads of the Security agencies. Instead of triggering a crisis, the outgoing President should have met the family of Ikran Tahlil and assure them of due process.”

Mohamud said the Prime Minister is responsible for all law enforcement agencies in the country, including the security forces.

But even before the dust settled on the intelligence chief’s firing, Roble struck again on Wednesday. This time, "considering the need to revitalise national security, capacitate security institutions and the vastness of issues before the government”, he fired Internal Security minister Ambassador Hassan Jimale and appointed former Treasury minister Abdullahi Mohamed Nur as his successor.

Nur was sworn in on Thursday but not without protests.

President Farmaajo responded by saying any dismissal of a member of the Council of Ministers will not take effect until it is in accordance with the provisional constitution of the country.

Jimale decried that PM Roble had himself told the ministers they cannot fire anyone because the government is under transition and has entered the election period.

“So let him follow the rules that he gave his cabinet!” he said, accusing Roble of getting the country into a new political crisis.

In a letter on Thursday, the speaker of the House of the People expressed Parliament’s concern on PM Roble's “illegal swearing-in" of a member of the cabinet without there being any constitutional or legislative vacuum.

The speaker termed the move a violation of Article 69 (D) and 100 (C) of the Somalia constitution.

It also emerged that the speaker was preparing for a no-confidence vote against Roble.

For the safety and security of the people, an interim government is the only viable option
Siasa
3 weeks ago

Somalia's Farmajo and Roble: the leaders at loggerheads