Claims President Kiir doesn’t want to leave power, calls for pressure on him or force will be used

• In an exclusive Staar interview, a former South Sudan Liberation Army General and ex-political detainee said they are ready to don their uniforms and remove President Kiir from power “soon”.

• Gen Oyay Deng Ajak, who also served in various Cabinet dockets, said the only other option President Kiir has is to resign. 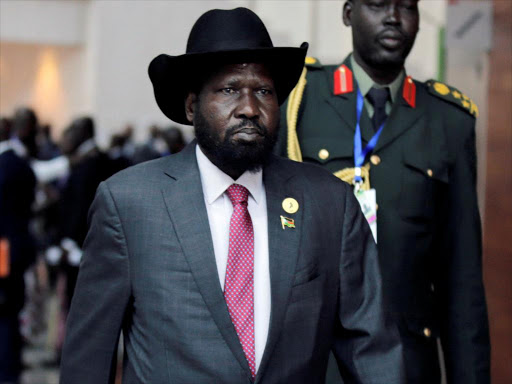 South Sudan's President Salva Kiir during the 30th Ordinary Session of the Assembly of the Heads of State and the Government of the African Union in Addis Ababa, Ethiopia January 29, 2018.
Image: REUTERS

A plan is underway to remove South Sudan President Salva Kiir from power if he does not resign this year, the Star can reveal.

In an exclusive interview in Nairobi, a former South Sudan Liberation Army general and ex-political detainee has said they are ready to don their uniforms and force President Kiir from power “soon”.

“We are talking to various SPLA officers from all communities and Salva is going to be shocked very soon," former SPLA chief of staff Gen Oyay Deng Ajak declared. He has served in various dockets.

The Ajak group — whose members he did not disclose — accuse President Kiir of tribalism, destroying the ruling party SPLM, the SPLA army, the police and running down the country.

"And no peace talks that will work with Salva again. So the only option left to us is to fight him. We are planning, we are organising and we are ready,” Gen Ajak said.

The only option is for Salva to resign, he said.

“If South Sudan is a member of Igad, the EAC and the African Union, the only other solution is for the regional bloc and the international community to pressure Salva to resign.

"He can stay peacefully anywhere in the region, we in South Sudan can forgive him and let him stay in Juba. But the current regime must resign and we will form a government of technocrats to restructure and lead the country for three to four years or whatever to a credible election.

"This cannot happen under Salva,”Ajak said.

In what apparently spells doom for South Sudan’s fragile peace on its 10th Independence Day anniversary this year, Ajak said if that doesn’t work, the only other option is for the South Sudanese to fight and chase him from the presidential palace.

“Otherwise, there will be no election and there will be no peace under Salva. And Salva wants to die in that seat. There is always time for everything but the time will come very soon for Salva to go. Either he goes by resigning, as I said, or we are going to fight him,” Ajak reiterated.

South Sudan Ambassador Chol Ajongo did not respond to a request for comment on the claims.

Ajak, who served as Minister of Investment and later National Security, was among 11 senior government officials who were accused of plotting a coup against President Kiir on December 15, 2013.

They were arrested and detained for six months until President Uhuru Kenyatta secured their freedom in a deal with his South Sudan counterpart under the auspices of Igad.

While South Sudan said the detainees would be held behind bars, Kenya gave them red carpet treatment and provided them with passports. President Kiir opposed the move, saying it was not what they had agreed.

He said the release of all the detainees was the first step in the reconciliation process.

But in a recent interview with Citizen TV, Kiir accused President Kenyatta of withdrawing his promise to keep the political detainees “safely”.

“I am not happy because after the attempted coup of 2013, President Uhuru took the lead that he was coming to take the leaders that I had apprehended during the coup. I told him, 'My brother, I cannot give you these people because they have to answer the charges on the role they played in the coup.'

"But President Uhuru put himself in front of me , [saying] he will not allow them to talk a single political sentence, that he would keep them safe in his house until I am convinced that they did not do anything. And so we released them to you [Kenyatta],” Kiir said.

President also unhappy with how the Intergovernmental Authority on Development steered peace process.
Siasa
11 months ago

“You know what Salva did? He organised tribal leaders called the Dinka Council of Elders, who have taken over the party,"Ajak said.

"He created tribal differences and now the Dinka are taking land from other communities. So you are creating problems in the future even for the Dinka themselves,” Ajak said, accusing President Kiir of entrenching tribalism.

“I don’t think there will be an election under Salva Kiir. What created this problem in 2013 was that Salva was afraid of going for an election. The agreement they signed talks of an election but I don’t think it will happen,” Ajak said.

He said it is not possible to hold an election where there is no national security, where citizens are living in camps in the national capital Juba and millions of refugees are in neighbouring countries.

Ajak further claimed the government in Juba has been taken over by the former Khartoum clique of the Sudanese National Congress Party.

”They are the ones who have taken over in Juba, traitors who have the blood of the South Sudanese on their hands. We will get them soon. This year, the time of Salva is coming. And it has happened all over the world,” Ajak said.

In June 2019, Ajak told Sudanese Radio Tamazuj he was in contact with rebels fighting Kiir’s government. "I have contacts with them but our programme will be made public when the time comes," he said.

He added that he was ready to form a rebel group, in case the revitalised peace deal collapsed.

“I have all the options and nothing can stop me,” he said.

Ajak told the Star if there is any mistake he has made in his life, it was to refuse to take up arms in 2014, when they were released from jail.

“I could have joined Riek or I could have formed a separate front to fight Salva. And there are so many of my colleagues who are calling. So, it is a mistake that I made almost eight years ago.

"We have been made refugees from the country we liberated but we will not continue staying in Kenya, Ethiopia or Uganda.

“This year, we are going to put on our uniforms and go back and fight Salva Kiir. And he must go. That country belongs to all of us, not to a particular group or leader to destroy. So definitely, we are going to fight him,”Ajak said.

This threat dampens President Kiir's 10th Independence Day pledge that he will not let the world’s youngest country slip back in to war.

“I want to assure you that I will not return you back to war. Let’s work together to recover from this past decade and put the country back on the path to development in this new decade,” Kiir said in his speech on Friday.

He identified the National Salvation Front led by Gen Thomas Cirilo as a group that has refused to be part of the peace process and “still contributes to instability in some parts of the country".

A return to war would worsen an already bad situation.

The 2021 South Sudan Humanitarian Needs Overview identified 8.3 million people, including refugees, in need of humanitarian assistance across the country.

This is an 800,000-person increase in absolute numbers from the 7.5 million people in need in 2020. Humanitarian partners need $1.68 billion to meet the needs.