Coronavirus: What misinformation has spread in Africa?

• An image of a bottle of Dettol, the well-known disinfectant used to clean surfaces, has been widely shared on social media in Nigeria and South Africa with people noting that the label says the surface cleaner is effective against "human coronavirus". 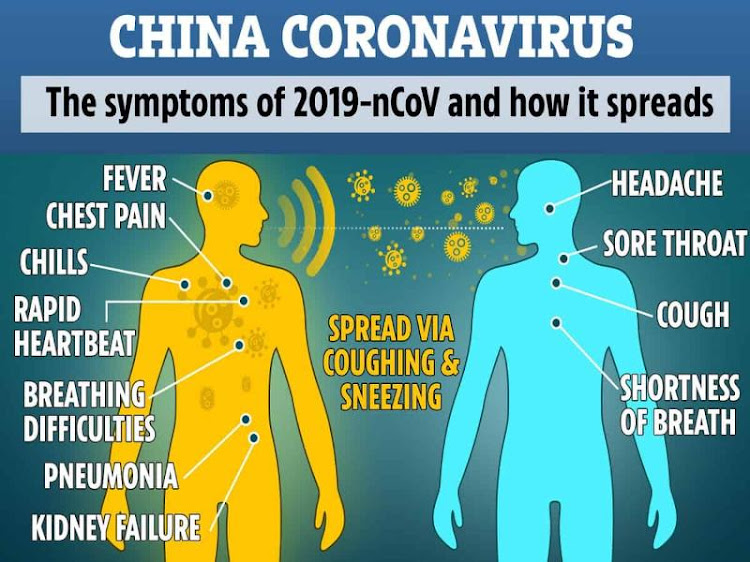 As cases of the coronavirus increase around the world, there's been a flurry of misleading or false news stories emerging, as well.

There have been relatively few confirmed cases of the virus in Africa so far, but the authorities in some countries on the continent are still having to deal with misinformation.

1. Dettol hasn't been tested on the new coronavirus

An image of a bottle of Dettol, the well-known disinfectant used to clean surfaces, has been widely shared on social media in Nigeria and South Africa with people noting that the label says the surface cleaner is effective against "human coronavirus".

In Nigeria, the message that has circulated on WhatsApp is "Wow! We'll share! Imagine Dettol can help in fighting Corona virus and we're ignorant of it. It's written on the container." 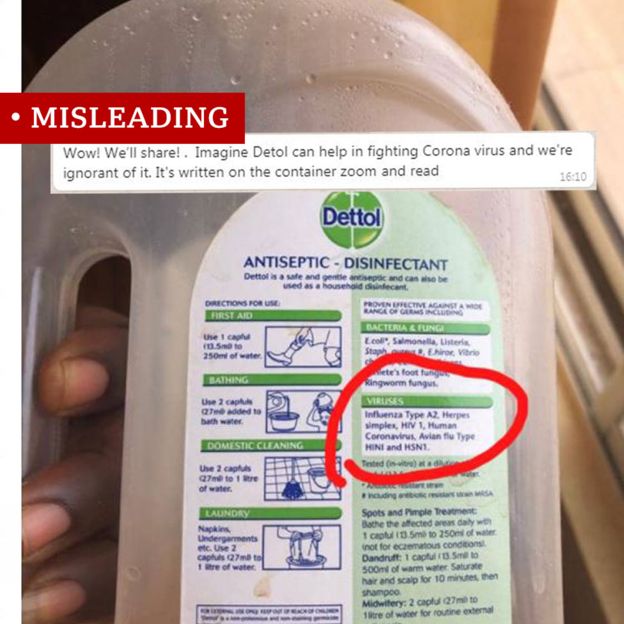 We have added labels to the screenshots to indicate whether the story has been found to be "misleading", "false" or using an "old photo".

Several of the most widely shared posts were in South Africa. Someone wrote: "Apparently Dettol can treat the virus."

However, Dettol has not been proven to kill or treat the new coronavirus - officially called Covid-19 - although the use of surface cleaning solutions such as Dettol are recommended to reduce the general spread of infections.

In a statement, the company said that their disinfectant has not yet been tested against the new coronavirus but says their products "have been found to be effective" against other known coronaviruses affecting humans (such as Sars-CoV).

2. No, you don't need to shave your beard to protect against the virus

An old graphic created by the US health authorities about facial hair and respirators has been used incorrectly to suggest men should shave off their beards to avoid catching the coronavirus.

The Nigerian Punch newspaper's headline said: "To be safe from coronavirus, shave your beard, CDC warns" 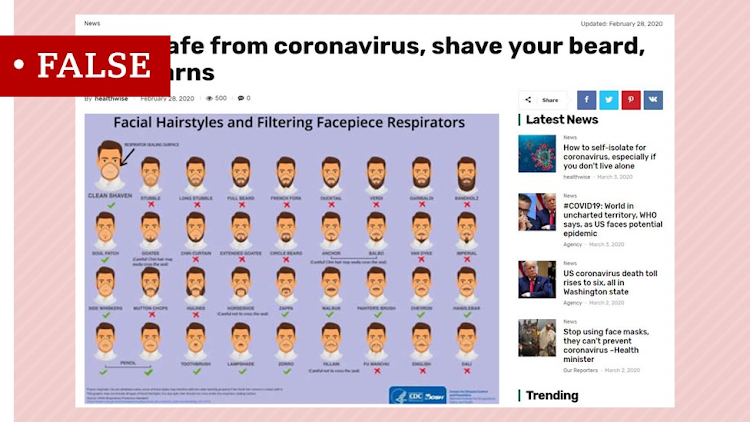 The US Centers for Disease Control (CDC) image shows dozens of examples of facial hair and which ones to avoid when wearing a respirator mask. Beard styles such as Side Whiskers and the Zappa are approved but the Garibaldi and French Fork can interfere with the valve and prevent the respirator working properly.

The graphic is genuine - but it was created in 2017 (well before the coronavirus outbreak) for workers who wear tight-fitting respirators. Contrary to what's been reported, the CDC has not published it recently and it does not recommend that people shave off their beards.

Similar headlines have appeared in other countries, generating thousands of shares. Australian news outlet 7News posted on Twitter: "How your beard may unknowingly increase your risk of coronavirus."

Current UK health advice is that while masks are useful for medical staff in hospitals, "there is very little evidence of widespread benefit for members of the public".

An evangelical preacher who claims he can cure the virus has also been the subject of disinformation. 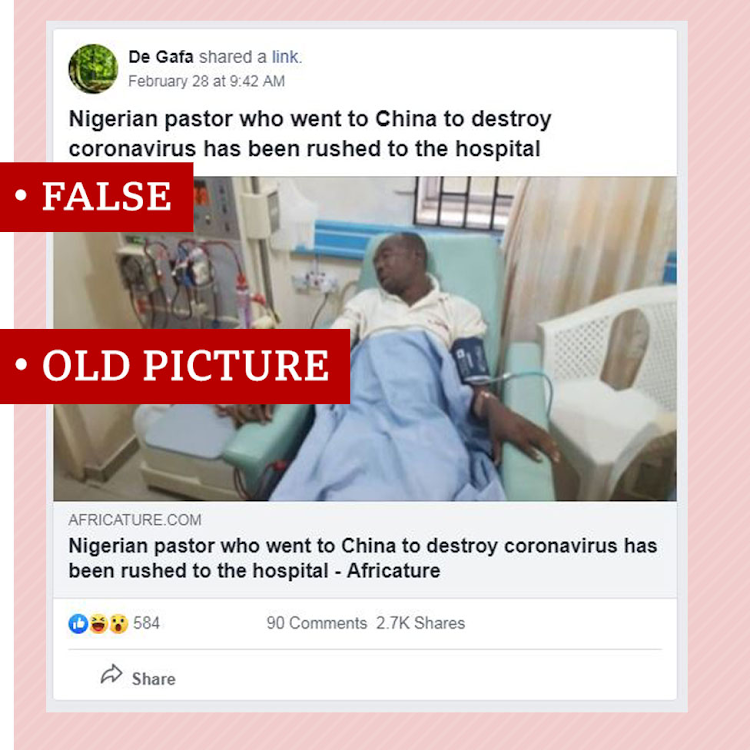 Stories about David Kingleo Elijah, from the Glorious Mount of Possibility Church started spreading online after a video of him saying he would move to China to "destroy" the virus was uploaded on YouTube and shared on other platforms.

A few days later, reports appeared in blogs alleging that he had travelled to China but had been admitted to hospital after contracting the virus. The blogs refer to the pastor under a different name - Elija Emeka Chibuke.

The photo used to show him in hospital is actually a photo of Adeshina Adesanya, a Nigerian actor popularly known as Pastor Ajidara, who died in hospital in 2017.

4. False posts about a taxi driver

A story about the Nigerian driver of a man diagnosed with coronavirus was posted on social media and shared by WhatsApp users - but is untrue.

According to the message, the taxi driver drove a "white man" diagnosed with coronavirus to a location that was quarantined. The Ogun state government then told the driver to go to hospital.

It was claimed the driver then tested positive for coronavirus - but escaped from hospital and threatened to spread the virus unless his family was paid 100m nairas ($274,000).

The report has been denied by the authorities. 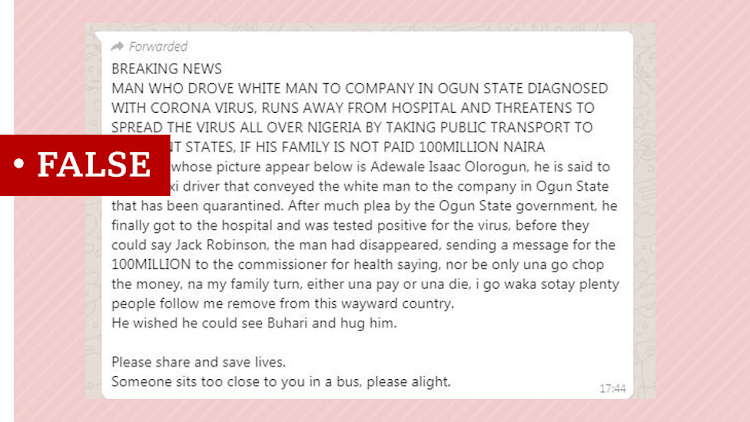 The Ogun State government dismissed the claims in a statement, saying no patient had escaped from the isolation centre.

Everyone that had any link with the Italian victim of the dreaded virus since he arrived the country has been quarantined. The others, who these primary contacts also had interactions with are equally being monitored.

Everyone that had any link with the Italian victim of the dreaded virus since he arrived the country has been quarantined. The others, who these primary contacts also had interactions with are equally being monitored.

The original post appeared on a fake account of the private Africa Independent Television (AIT) network, which released a statement saying the page was not its official Facebook page.

It included a photo of the driver and named him as one Adewale Isaac Olorogun. However, exactly the same photo appeared in a Buzzfeed article about Libya and under a completely different name - Jude Ikuenobe.

Mr Ikuenobe told the BBC's Yemisi Adegoke he was shocked to learn that he was named in the posts and was distressed by some of the comments which contained violent threats against him.

"I haven't been moving around on my own. Anywhere I go, I'm moving with friends and family.

"Ever since [the post went viral] it has not been easy for me to cope."

Nigeria and sub-Saharan Africa's first confirmed coronavirus case was an Italian man who flew into Lagos on 25 February.

Authorities say they have reached about 100 people who may have come into contact with him.

In Kenya, the government has had to put out a statement denouncing "fake news" about the coronavirus, which includes an audio recording, circulated on WhatsApp, claiming to be an official press briefing on the virus.

PRESS RELEASE on fake news about COVID-19 (Coronavirus) in the country.

The recording states that there were 63 cases in the country, which is not true. There are currently no confirmed cases in Kenya.

The health ministry said it had been part of a communications training exercise but did not explain how it had been made public.

Under an existing law, Kenyans risk a fine of $50,000 (£39,000) or a two-year jail sentence for publishing or sharing fake news about an outbreak. 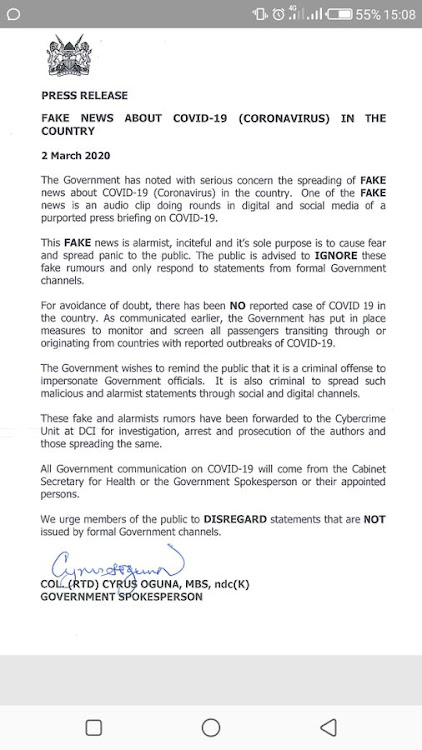 The Ministry of Health would like to caution the general public against an audio being shared on WhatsApp groups about confirmed cases of coronavirus in the Country. There is NO confirmed case of COVID-19 in Kenya. @KNH_hospital @CDCKenya @UNICEFKenya @WHOKenya @BreakingNewsK

In Nigeria, a preacher posted a video and a poster claiming that pepper soup is a cure for coronavirus. The claim was also shared on WhatsApp.

There is no cure or specific treatment for coronavirus and the claim gives few details about the medicinal properties of pepper soup - a traditional spicy Nigerian dish.

The WHO says the outbreak has caused an "infodemic" of false and misleading information.

In Cape Verde, the tiny Portuguese-speaking West African nation, a post spread on social media claiming that a Brazilian doctor had recommended fennel tea as a cure for coronavirus. It prompted a rush for the herb in local markets, reported AFP.

The Brazilian health ministry has warned people not to share an article suggesting fennel as a cure for coronavirus.

The World Health Organization says that thorough and regular hand-washing is crucial in the fight to avoid infection.