• The department said in January 2017, Deng reportedly advised and influenced another South Sudanese government official to execute Dong and Aggrey after they were kidnapped from Kenya. 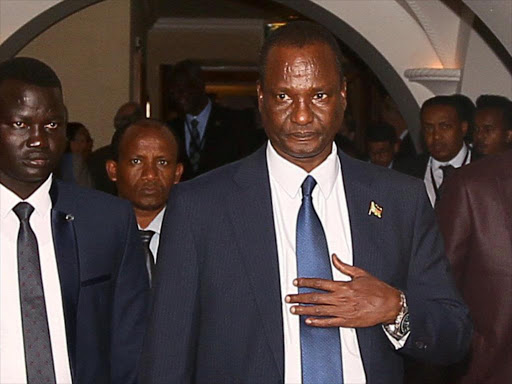 According to the Department of the Treasury's Office of Foreign Assets Control (OFAC), Deng is said to have involved himself in the disappearance and deaths of civilians.

A statement from the department on Wednesday said  Deng acted to divide and sow distrust within the Sudan People’s Liberation Movement in Opposition (SPLM-IO) and broader Nuer community, which has extended the conflict in South Sudan and deteriorated the reconciliation and peace process.

The department said in January 2017, Deng reportedly advised and influenced another South Sudanese government official to execute Dong and Aggrey after they were kidnapped from Kenya.

As a result,  Deng ostensibly believed that by murdering Dong and Aggrey he would weaken support for opposition leader Riek Machar and thus solidify his political position within the SPLM-IO and keep his position as First Vice President.

The department maintained Deng is being designated for being responsible for, being complicit in, or having directly/ indirectly engaged in serious human rights abuse.

“The Government of South Sudan’s refusal to create political space for dissenting voices  from opposition parties, ethnic groups, civil society, or media has been a key factor in the country’s inability to implement a peace agreement and ongoing acts of violence against civilians,” the statement read.

It added, “Taban Deng Gai’s attempt to silence the opposition party is derailing the country’s ability to implement a peace agreement”.

Deputy Secretary Justin Muzinich said the United States calls on all nations to exclude from the international financial system those who jeopardize South Sudan’s future.

He said the action is pursuant to Executive Order (E.O.) 13818, which builds upon and implements the Global Magnitsky Human Rights Accountability Act and targets perpetrators of serious human rights abuse and corruption.

US further accuses Deng of directing these actions in order to solidify his position within President Kiir’s government and to intimidate members of the SPLM-IO.

“The designation of Deng follows the December 10, 2019, designations of five South Sudanese individuals who were also involved in the disappearance and reported deaths of Dong and Aggrey,” the statement said.

America said in September 2018, South Sudanese President Salva Kiir and opposition leader Riek Machar reached a revitalized peace agreement that called for the formation of a national unity government on May 12, 2019.

Government and opposition leaders extended that deadline twice, most recently on November 7, 2019, but more than 50 days into the extended pre-transition period, there have been no concrete steps to create the security conditions conducive to implementing a peace deal.

“Since the September 2018 agreement, which included a permanent ceasefire, hundreds of civilians have been killed, raped, and abducted, including in clashes in December 2019,” the department said.

According to the department, UN has reported that more than 50,000 civilians have fled their homes as a result of the violence.

“The U.S Government will not hesitate to target those who have perpetuated the conflict in South Sudan and will continue to apply pressure on the senior leadership of South Sudan to take concrete measures to bring peace and stability to the country,” the department said.