• Nigeria play Burundi in Alexandria on Saturday, with temperatures expected to reach up to 40C (104F).

• The Confederation of African Football (Caf) plans to have two cooling breaks per match, in line with Fifa rules. 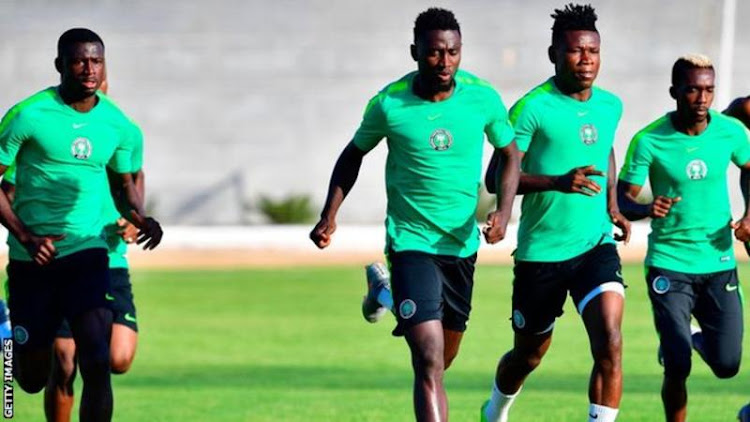 Samuel Kalu (seond from right) has made five appearances for his country
Image: GETTY IMAGES

Nigeria forward Samuel Kalu was taken to hospital on the eve of his side's first Africa Cup of Nations match suffering from "severe dehydration".

The 21-year-old, who plays for French top-flight side Bordeaux, collapsed in training on Friday.

Nigeria play Burundi in Alexandria on Saturday, with temperatures expected to reach up to 40C (104F).

The Confederation of African Football (Caf) plans to have two cooling breaks per match, in line with Fifa rules.

BBC Africa football writer Oluwashina Okeleji said Kalu collapsed as he took a corner in training and the session was delayed for about 25 minutes.

Nigeria's team spokesman Toyin Ibitoye said Kalu is in a "stable and comfortable condition" after tests in hospital and will miss the first match of his side's campaign in Egypt.

Okeleji added that Ibitoye was quick to play down "exaggerated" reports on social media, after Kalu was discharged from hospital to link up with the team again.

"Kalu returned to the hotel in the early hours of Saturday and will remain under observation," said Ibitoye.

This is the first time the tournament is being played across June and July, with temperatures in Egypt expected to remain high over the next month.

All matches will feature three-minute heat breaks, taken in the 30th and 70th minutes, with water and cold towels provided for players and officials.

Teddy is among six holding midfielders called up by Harambee Stars coach.
Sports
3 years ago

Afcon-bound Wanga made to wait for Golden Boot fate

This is after the Ulinzi Stars clash against Mount Kenya United was pushed forward to the weekend.
Sports
3 years ago

A sigh of relief as Multichoice commits to relay Afcon live