This is why Ruto is selling parastatals – Ndindi Nyoro

"You cannot continue to entertain a company that makes losses," he said.

• The Kenya Kwanza government is planning to privatise about 18 loss-making parastatals to bring in strategic investment. 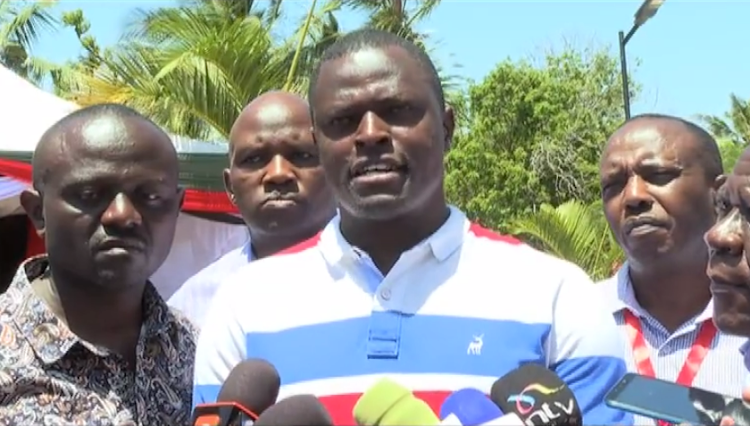 Kiharu MP Ndindi Nyoro speaks to the media in Mombasa during the induction of MPs, January 25, 2023.
Image: SCREEN GRAB

Kiharu MP Ndindi Nyoro has said the plan by the government to sell loss-making parastatals is cast in stone.

"We have over 334 government agencies, corporations (and) companies. Most of them make money, most of them are regulators, and most of them, unfortunately, haemorrhage money," he said.

"And therefore, it is the wisdom of the president and that of this government that the Kenyan people cannot continue carrying the load of parastatals that have not been making money in the recent past."

The MP spoke on the sidelines of the MP's induction at the Pride Inn Hotel in Mombasa.

The seminar resumed on Wednesday after it was disrupted on Tuesday after MPs walked out demanding that NG-CDF funds be disbursed without delay.

They staged a similar protest on Monday and accused Treasury CS Njoroge Ndungu of playing games with them.

Back to the parastatal issue, Nyoro said it's the mandate of any responsible government to avert the loss of public funds by privatising loss-making state agencies.

"You cannot continue to entertain a company that makes losses, does not make any strategic value for government to continue gobbling taxpayers money," the MP said.

The Kenya Kwanza government is planning to privatise about 18 loss-making parastatals to bring in strategic investment.

The Treasury is meanwhile seeking to exclude Parliament from approving the sale of the entities in proposed changes contained in the Privatisation Bill.

Currently, the CS is supposed to submit a sessional paper on a Cabinet-approved privatisation proposal to the National Assembly for consideration.

But if the state-backed Privatisation Bill is approved, the Treasury CS will approve the sale of parastatals with the board of the Privatisation Authority.

This is aimed at fast-tracking the approval process for the sale of government assets.

Nyoro said the plan to offload the non-performing state agencies to the private sector is a wise move since the government will still make money from the entities through corporate tax.

"Ultimately, the government is a 30 per cent shareholder of every business in Kenya, because corporate tax in Kenya is 30 per cent and therefore the government does not need to own any active stake in any company because either way, they share the profits of all the businesses," Nyoro said.

Treasury to kick out MPs from sale of state firms

The bill hands the Cabinet secretary powers to decide which ones to dispose.
News
6 days ago

Loss-making State corporations to be shut down- Mudavadi

“Hard decisions are on the way.”
News
1 week ago
Post a comment
WATCH: The latest videos from the Star
by EMMANUEL WANJALA Radio, Print & Digital Reporter
News
25 January 2023 - 17:43
Read The E-Paper