Tell Raila I'm not available to swear him in again — Miguna

On Monday, Raila said he does not recognise Ruto as President of Kenya

• Miguna swore in Raila as the People's President after he lost the August 2017 presidential election to retired president Uhuru Kenyatta.

• Following the swearing in, he was then arrested and deported to Canada where he stayed for slightly over four years. All his attempts to return to Kenya failed. 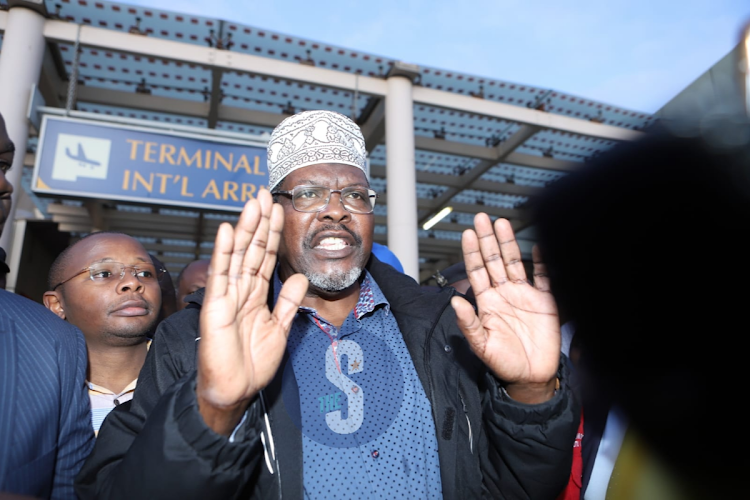 Lawyer Miguna Miguna has said he will not be available to swear in Raila Odinga as the 'People's President' for the second time.

Miguna also said he is not prepared to help the opposition leaders to urge their supporters not to recognise William Ruto as the legitimate President of Kenya.

He further accused Raila of conmanship, insisting that this time around, the former Prime minister is on his own.

"We do not recognise the Kenya Kwanza administration as a legitimate government and Ruto as the president or any official in his government," Raila said.

Please tell conman @RailaOdinga that General @MigunaMiguna isn’t available to swear him in as the People’s President, nor am I prepared to help him boycott or resist the DULY-ELECTED President of the Republic of Kenya. The cowardly and treacherous conman is on his own!

In a hard-hitting statement, Raila also called on Kenyans to reject the promises made by the government saying it is resorting to despondency.

"We are asking Kenyans to resist the punitive taxes on common products by this regime," he said.

The Azimio leader further said a forensic audit of the IEBC results must be undertaken and that it is unnegotiable.

Raila also affirmed the revelations by a 'whistleblower' that they won by over two million votes.

"Since August 15, we have conducted our investigations and we are convinced we were robbed of our victory...our opponents beat us only in some regions in the Rift Valley," he said.

Miguna swore in Raila as the People's President after he lost the August 2017 presidential election to retired president Uhuru Kenyatta.

Following the swearing in, he was then arrested and deported to Canada where he stayed for slightly over four years. All his attempts to return to Kenya failed.

The deportation and the handshake between Uhuru and Raila led to the fallout with Miguna, who has since accused the former PM of neglecting his people and insisted focusing on his individual interests.

Said it was time Raila walked the talk and gave a definite course of action.
News
1 week ago

Why I don't recognise Ruto as president - Martha Karua

"The court spoke, we gave way and we are still searching for the truth," she said.
News
3 months ago
Post a comment
WATCH: The latest videos from the Star
by BRIAN ORUTA Digital Journalist
News
25 January 2023 - 11:47
Read The E-Paper