Misori now says some areas like Kiambu and coastal regions are more expensive. 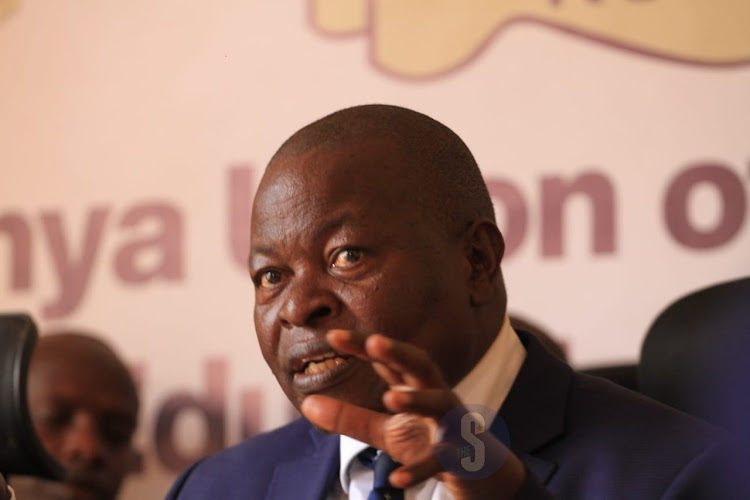 Kuppet secretary General Akelo Misori demanded that the allowance given to teachers in all counties be made to fit within a similar bracket.

Misori accused the Salaries and Remuneration Commission of scuttling ongoing discussions between the teacher’s employer and union.

“The SRC’s so-called new allowances are mere political gimmickry which should be treated with the contempt they deserve,” Misori said.

The teacher's house allowance is said to have been crafted from the rates charged in Nairobi which was seen not to be the most expensive.

But the SG now says some areas like Kiambu and coastal regions are more expensive.

“The new rates for the house allowances shall apply to all public officers, other than state officers at the national and county government, including state corporations from the scheduled effective date of implementation,” SRC said in a circular.

But Misori decried that the current rates are not sustainable for a teacher leaving in any county across the country.

For instance, he said, a teacher receiving Sh3500 as a house allowance, and works in Kileleshwa is forced to look for a cheaper place.

“When you give a teacher a Sh3500 house allowance where do you expect them to stay? Should they move to Kawangware?” Misori paused.

Misori said the current allowance only allows teachers to stay in slums and shanties.

He recommended an upward review which would fit teachers living in all counties.

“Some of the allowances reported as new were awarded to the teachers' ages ago, even before 2016-2021 CBA,” he said.

Misori said despite the SRC plan to stop discussions between the unions and teachers' employers, a decision must be made.

“The tiny number of officers set to benefit from the increases would be more properly reached without the drama of releasing a circular,” Misori said.

“They need to study the economic index, what Sh6,000 could pay for ten years ago is not the same as right now,” Nthurima said.

He said if the union demands are not met, they will take the next action, which they did not reveal.

Now the unionist wants SRC to consider economic inflation as witnessed in the country.

"Such allowance takes into account the increased cost of living and rental charges throughout Kenya following increased urbanization," he said.

In July 2021, the unions in the public sector signed a cashless CBA out of the advice by the SRC for non-monetary CBAs due to the effects of Covid-19 on the country’s economy.

SRC has awarded them enhanced house allowance.
News
4 days ago

"For teachers serving in cities like Nairobi, Sh3500 is not realistic"
News
3 days ago
Post a comment
WATCH: The latest videos from the Star
by LAURA SHATUMA
News
25 January 2023 - 21:10
Read The E-Paper