I didn't say that, Wetang'ula dismisses report on CBK rules

Says writer lacked comprehension of his communication to House committee.

• Wetang'ula said the report by the publisher is misleading as its contents are totally unrelated to his communication to the Committee on Delegated Legislation.

• He said his communication does not refer to any instrument made by the CBK or the TSC. 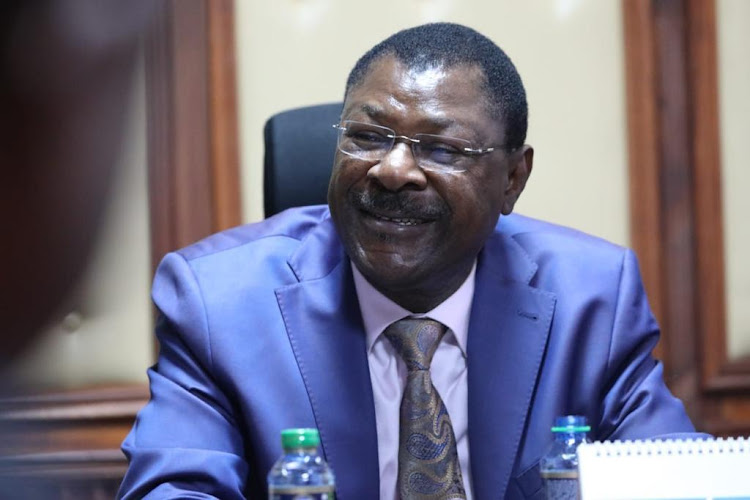 National Assembly Speaker Moses Wetang'ula has dismissed as fictitious claims by a local daily that he termed the teachers' delocalisation policy and Treasury's order on large cash transfers as illegal.

In a statement issued by the Clerk of National Assembly Samuel Njoroge, the Speaker said his communication to a House committee on which the article based the allegations points to a lack of comprehension on the side of the writer.

"The communication from the speaker which is available on the Parliament website simply reminded the Committee on Delegated Legislation on its power to call up for scrutiny any instrument said to be made in the exercise of powers granted under an Act of Parliament," Njoroge said.

The said publication reported that the Central Bank of Kenya (CBK) Governor Patrick Njoroge’s rules on large cash transactions and Teachers Service Commission (TSC) guidelines on the delocalisation of teachers risk being declared illegal because they were not approved by the House as required by the Statutory Instruments Act before they came into force.

Parliament is the only statutory body mandated by Article 94 (5) of the Constitution to legislate laws.

The communication from the Speaker posted on the parliamentary website read thus:

“Any instrument said to be made pursuant to a power granted by an Act of parliament must be brought before parliament for scrutiny.”

Wetang'ula said the report by the publisher is misleading as its contents are totally unrelated to his communication to the committee.

He said his communication does not refer to any instrument made by the CBK or the TSC.

"The National Assembly is currently on recess and the speaker has not addressed the media on the matters contained in the publication."

The clerk clarified that Wetang'ula's communication to the Committee on Delegated Legislation was to report to the House the failure of a regulation-making authority to table regulations for Parliament's approval.

He said the committee is also mandated to notify the public of the nature of the regulations that have not been approved by Parliament as required by law.

Njoroge further clarified that the regulations by CBK to limit bank deposits and withdrawals through the introduction of Section 33 C in the Banking Act were declared illegal.

"This amendment was challenged and declared unconstitutional by the Court for lack of public participation," he said.

3,962 teachers have been transferred back to their home counties in the region.
News
2 weeks ago

Kenyans will now have to contend with paying transaction fees between mobile money Wallets and Bank accounts after the Central Bank lifted the ...
Business
1 month ago
Post a comment
WATCH: The latest videos from the Star
by EMMANUEL WANJALA Radio, Print & Digital Reporter
News
25 January 2023 - 20:49
Read The E-Paper