Says his contribution in medical and education sector will remain indelible.

• Magoha was the last of Jubilee government's Education CS and was largely credited for midwifing the Competency-Based Curriculum (CBC).

• Magoha's service in education spans several decades where he has held various administrative posts at various institutions of higher learning in Kenya and abroad. 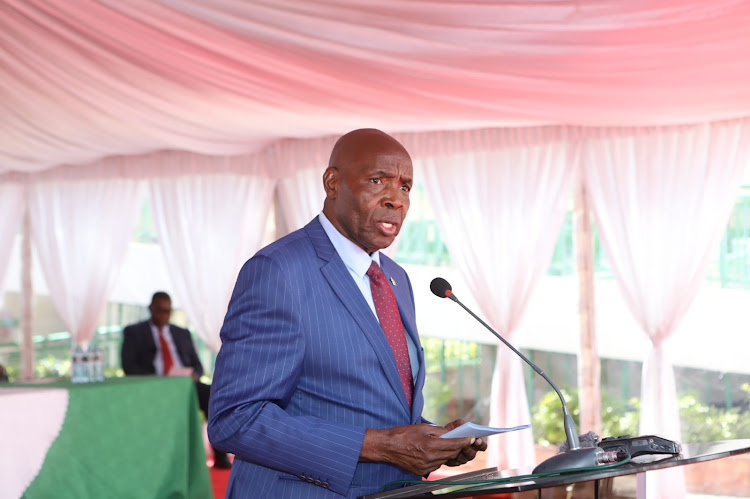 Education CS Ezekiel Machogu has mourned his predecessor the late Prof George Magoha whose untimely death on Tuesday robbed him of his life at the age of 71 years.

Machogu said he received the news of Magoha's passing with shock and deep sadness.

"Professor Magoha was not just my predecessor as cabinet secretary in the Ministry of Education. He was also a friend and colleague that I have known for a long time and whom I looked up to for advice," Machogu said in a statement on Tuesday.

The CS took over from Magoha following his appointment by President William Ruto soon after the Kenya Kwanza administration took power.

Magoha was the last of Jubilee government's Education CS and was largely credited for midwifing the Competency-Based Curriculum (CBC) following his appointment to the docket in January 2018, a year after it launch.

He was a fierce defender of the new system of instruction which focused on nurturing learners based on their natural talents as opposed to the exam-centered 8-4-4 system.

Machogu said the death has robbed the country of a consummate and dedicated public servant whose contributions in the medical and education fields will remain indelible.

"His death is not just a deep loss to his family but also to the entire country. My thoughts and prayers are with Prof Magoha's family during this difficult period," Machogu said.

Magoha's service in the education sector spans several decades where he has held various administrative posts at various institutions of higher learning in Kenya and abroad.

Machogu said he will mostly be remember for his transformational leadership at the University of Nairobi where he served as the vice chancellor for ten years between 2005 to 2015.

Magoha also served as chairman of the Kenya National Examination Council between 2016 and 2019.

Magoha died at the Nairobi Hospital on Tuesday evening aged 71.
News
4 days ago

He felt his time had come, Magoha's colleague reveals

"He asked the wife to call the son and the daughter in-law and said he wanted to see me."
News
4 days ago
Post a comment
WATCH: The latest videos from the Star
News
24 January 2023 - 22:16
Read The E-Paper