The 47 officers were sent home in August 2019 for underperforming

• The 47 then filed their appeals before PSC seeking review.

• Songa said that cases of 11 accountants sent home seven years ago were still pending before the courts and PSC. 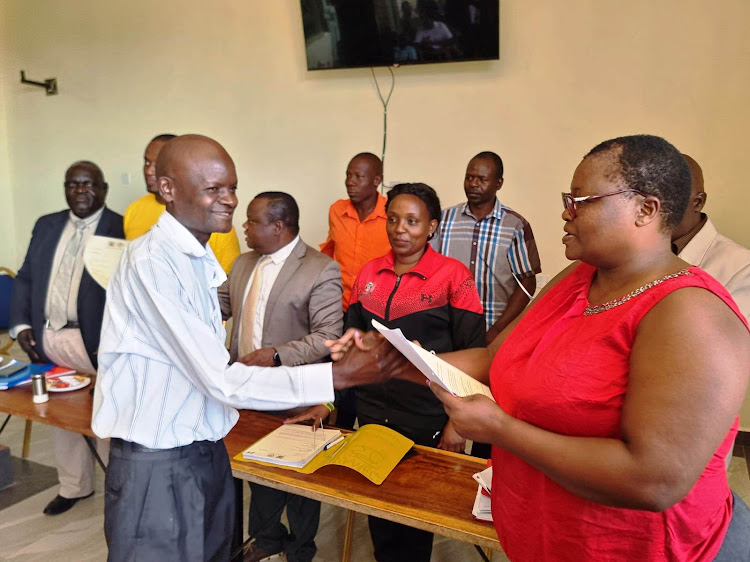 The Public Service Commission has reinstated 47 Kakamega county staff who were sacked three years ago for underperforming.

In a letter dated December 5 PSC chief executive officer Simon Rotich said the 47 officers whose appeals had been considered and who are yet to attain the retirement age be reinstated to the substantive positions they held before deployment to revenue collection.

He directed the County Public Service Board secretary to compensate the appellants who may have attained retirement age and therefore cannot be reinstated for unfair termination by payment of the equivalent of one-year salary.

“This is to notify you that the commission considered consolidated appeals from 47 revenue officers, found that the same were meritorious, consequently allowed the same December 5, pursuant to Section 86 (4) of the Public Service Commission Act, 2017 as read together with Regulation 21 of the Public Service Commission (County Appeals Procedures) Regulations, 2022,” the letter reads.

The letter is copied to the Principal Secretary, State Department of Public Service, Gender, Senior Citizens and Social Programmes.

County public service executive Lawrence Omuhaka said the letter had been delivered but declined to comment.

“I'm told that a letter has come but have not read it. I will comment once I have read through the letter,” he told the Star on the phone on Wednesday.

Oparanya fired 143 revenue officers in August 2019 on grounds they were underperforming.

In their place, he deployed 400 community administrators under the supervision of then finance executive.

The 47 then filed their appeals before PSC seeking review.

Christine Songa, the secretary County Workers Union Kakamega branch, said most of those who were irregularly sacked during Oparanya’s tenure were just victims of witch-hunt by those in top government positions.

“We hope those reinstated, although they should be 54 will be embraced because workers have been discriminated against and hope the current governor will recognise us as part of the government. There are several other cases still pending at different levels,” she said.

Songa said that cases of 11 accountants sent home seven years ago were still pending before the courts and PSC.

She said the county government lowered the entry group for county workers from Job Group F to Job Group A, which is way below the minimum salary.

Union Western region representative Juvenalis Orao said that the former local authority workers who have been harassed by the county leadership can deliver on their mandate.

Orao said that many staff have stagnated in the same job group for 12 years and asked county governments to be considerate.