They say minimum loan limit should then be capped at Sh100,000

A section of Azimio MPs have poured cold water on the just-launched hustler fund saying the kitty should have been interest-free. https://bit.ly/3AWI5CC 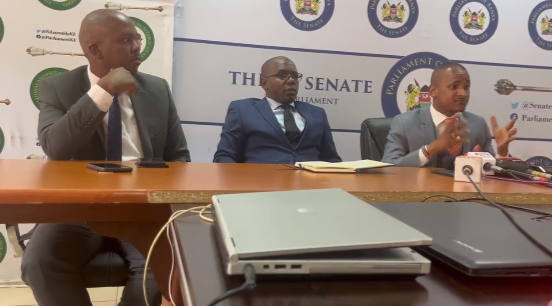 A section of Azimio MPs have poured cold water on the just launched hustler fund saying the kitty should have been interest-free.

Led by Embakasi East MP Babu Owino, the MPs said if anything, the Sh50 billion fund should have been combined with Azimio's social protection fund and the minimum loan capped at Sh100,000.

"In the Azimio manifesto, we did put aside Sh6,000 in the social protection. Kenyans should have earned this money by now because we had budgeted for this money and left it in the Treasury," Owino said.

He said what President William Ruto should have done was to combine the funds together with the budgeted funds for the defunct Kazi Mtaani and increase the hustler fund float.

"Combine this money then on a minimum, give every hustler a minimum Sh100,000. Let this money be in every bank in every constituency and use biometrics to disburse," Owino said.

"Then let that hustler move to the bank, identify himself biometrically and be given that money over the counter. You don't say thank you, you ask for more because it's your money."

He was flanked by  several Azimio MPs during a press briefing at Parliament buildings.

Ruto on Wednesday launched the hustler fund, which aims to provide cheap loans for small businesses.

The loans have been capped at a minimum of Sh500 and a maximum of Sh50,000 with an annual interest rate of eight per cent.

The funds can be borrowed via USSD code *254# and upon approval, five per cent goes to a savings pension scheme where it will earn interest.

The government said for every Sh2 saved, it will counter with an additional one shilling resulting in 50 per cent returns on investment to the borrower.

"For every Sh2 saved, the government will add one shilling."
News
1 month ago

How to grow your Huster Fund loan limit

Currently, the fund has a minimum limit of Sh500 and a maximum of Sh50,000.
News
1 month ago
Post a comment
WATCH: The latest videos from the Star
by EMMANUEL WANJALA Radio, Print & Digital Reporter
News
30 November 2022 - 17:12
Read The E-Paper