Varsity students call off protests after talks with security officials

•Mohammud said they will fast-track those cases and make sure suspects are apprehended and arraigned in court.

•Bade said their concerns had been amicably addressed by the security officials. 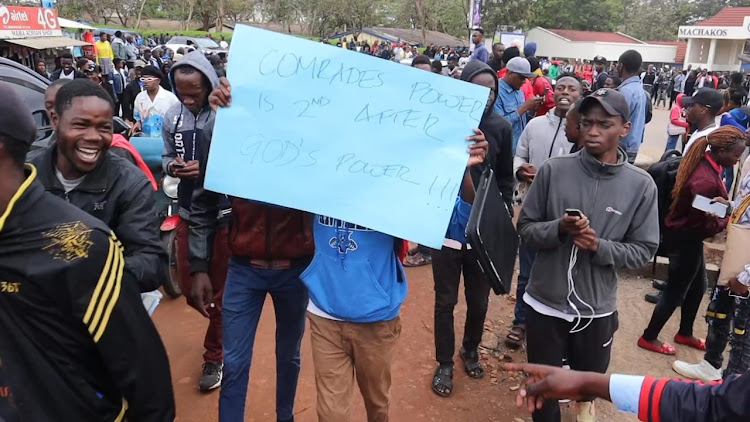 Normalcy has returned in Machakos town after university students called off the protests.

The Thursday demonstrations were called off following a successful three-hour meeting held between the county's security team and university students' leadership.

Machakos University students early Thursday went on a rampage protesting over insecurity in some of the estates where their students live.

"We have had a long day with the students' leadership and students among them their chairman. We have agreed on issues affecting their security which are valid concerns raised by students and we have dealt with those issues," he said.

Mohammud said they will fast-track those cases and make sure suspects are apprehended and arraigned in court.

He said they will intensify patrols in the entire county and Machakos University students will be part of community policing.

"We have agreed on many issues that we will work together and everything will be okay, " he said.

The police boss said they will intensify patrols in the affected areas including Muthini, KMTC and Katoloni estates.

He said as a County security team, they will conduct barazas in all the areas mentioned by the students as hot spots as far as insecurity is concerned.

Bade said their concerns had been amicably addressed by the security officials.

"We have discussed mechanisms to put in place to curb issues of insecurity. I appeal to the entire university students fraternity to champion peace and security wherever they are going forward, " he said.

The students said their colleagues have in the past been attacked by criminals.
News
1 week ago
Post a comment
WATCH: The latest videos from the Star
by GEORGE OWITI Correspondent - Machakos
News
25 November 2022 - 08:09
Read The E-Paper