State has so far used Sh56 billion on the LAPSSET project.

• Mudavadi is in Lamu County for a two-day working tour, where he first inspected the progress of the Lamu Port South Sudan-Ethiopia Transport (LAPSSET) corridor project.

• "We want to ensure that any work undertaken here bears significant fruit for us to attract more investors through the PPPs in order to aid in the completion of this LAPSSET project." 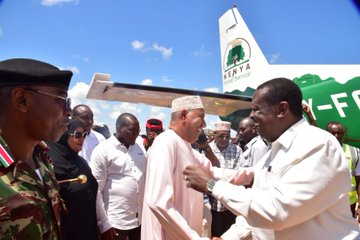 Prime Cabinet Secretary Musalia Mudavadi has said the government, through his office in collaboration with other ministries and state departments, will undertake a comprehensive appraisal of all projects funded with taxpayers' money.

Mudavadi is in Lamu County for a two-day working tour, where he first inspected the progress of the Lamu Port South Sudan-Ethiopia Transport (LAPSSET) corridor project.

The Lamu Port's phase one comprises 17 berths, of which three are complete and operational.

Mudavadi arrived in the county on Friday morning and was received by Lamu Governor Issa Timamy.

“Kenyans should understand that the government has already used Sh56 billion on this project," he said.

"Already ships are docking here and of significance is that Kenyans are already exporting Livestock through the Livestock off-take program to countries like Oman via the Lamu port."

Mudavadi added that the State was planning to drill fresh water in the area.

"A number of investors have already shown interest and as we speak some have already started laying groundwork ready to commence water drilling here," he added.

The port is estimated to be worth Sh310 billion when complete and will boast of at least 32 berths upon full completion, making it the largest deep-water port in Sub-Saharan Africa.

The government has already structured the remaining 29 berths to be handed over to private sector investors for financing, construction, and operation.

“We must now shift financing for completion of the remaining works to PPPs to awaken this sleeping giant," the PCS said.

The LAPSSET includes Manda Airport, Lamu Port and Special Economic Zones, and roads linking Lamu to Isiolo, Garissa and Moyale. Lamu Port is the deepest port on the Eastern and Southern Africa Coast.

“This is a government project funded by the taxpayer's money. Moving forward a lot has to be done since we have to complete the road going to Garissa and Isiolo and the phases that lie ahead will need more concentration for us to achieve the ultimate goal," he said.

"We want to ensure that any work undertaken here bears significant fruit for us to attract more investors through the PPPs in order to aid in the completion of this LAPSSET project."

The completion of the LAPSSET Corridor Project will strengthen the position of the East African region as a gateway translocation logistical hub.

Mudavadi in Lamu for a two-day working tour

The PCS will inspect projects in area, among them LAPSSET
News
6 days ago

They urge the Timamy-led administration to stick to its pledge of facilitating jobs for youths.
Counties
2 months ago
Post a comment
WATCH: The latest videos from the Star
by SHARON MWENDE
News
25 November 2022 - 19:52
Read The E-Paper