Sensational reporting on Al-Shabaab keeping kids out of school

This suggests that media coverage plays crucial role in stoking fears and keeping children out of school. 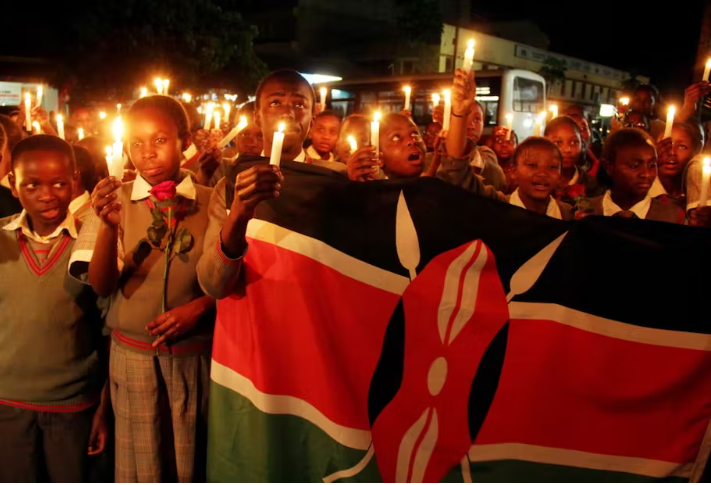 Pupils in Kenya hold prayers for victims of a 2013 terror attack in Nairobi. Joseph Kanyi/Nation Media/Gallo Images/Getty Images
Sensational reporting on terror attacks in Kenya is keeping children out of school, with dire consequences for their education and their futures.

That is the conclusion we came to in a recent paper that examines how local media reporting on terrorist attacks affected primary school enrolment in Kenya between 2001 and 2014.

We found that households with access to such media reports were more likely than homes without access to feel that they and their children could die in terrorist attacks.

Based on Kenyan National Bureau of Statistics data on the country-wide number of primary school children, we estimate that in 2014, for instance, more than 70,000 learners didn’t enter school on time because of terrorist attacks. Our analysis finds that half of this number can be attributed to an over-response fuelled by media reporting.

We estimate that for the average affected learner, this will lower their lifetime earning potential by around 25% of a year’s income. This loss in earnings can be expected to have severe consequences for the country’s broader economic development.

To arrive at these insights, we built a model of how parents choose whether to send their children to school, have them work for pay or keep them at home. We incorporated the effects of terrorist violence into these choices.

Our results can be considered as a caution, not against reporting on terrorism, but against sensationalism. Moderate, facts-oriented reporting on terrorist events is not problematic. However, as a UNESCO report puts it, the media are “often operating in over-drive”, thus inadvertently becoming “the megaphone of terrorism to attract audiences”.

Terrorists use violence strategically to spread fear and disruption beyond the violent act itself. Media platforms, because of their reach, are the ideal vehicles to disseminate this disruption.

As a result of the interplay between terrorism and media, terrorists can affect pillars of economic development, such as education. This does not mainly happen through destroying infrastructure or harming staff and pupils, but by affecting the demand for schooling.

This parallels the effects of terrorism seen elsewhere. In attacks in Europe or the US, the economic effects are not derived from the immediate destruction of capital, but from changes in people’s attitudes and expectations.

We set out to examine how incidents of terrorism, together with access to mass media, affect education by changing its perceived risks and rewards. We selected Kenya for our analysis.

Parts of the country, since the late 2000s, have experienced a stark increase in terrorist activity by Al-Shabaab, a Somali terrorist group.

How we did it

We analysed the spatial concentration of terrorist attacks in Kenya using precise information from the Global Terrorism Database. We also studied the chronology of attacks between 2001 and 2014 – a time period that saw a steep rise in terrorist violence in the country and for which good data is available.

We then used two independent data sources on school attendance and enrolment in Kenya – the Hunger Safety Net Programme, and the 2009 and 2014 rounds of country-wide demographic health surveys, which are the latest available. To capture public attitudes to violence, we complemented our analysis with Afrobarometer data.

Using the geographic coordinates of respondents provided by these surveys and three types of wireless signal coverage (radio, GSM telephone and television), we were able to identify variations and trends in the data.

We looked at the trends in primary school enrolment in relation to media coverage and the incidence of attacks.

We found that while Al-Shabaab rarely targeted educational institutions in Kenya, its attacks substantially decreased school enrolments by about 0.5 percentage points for families outside the reach of mass media. Crucially, our results show that this negative effect doubled if parents had access to mass media.

We found that Kenyan families with access to radio, mobile phones or TV were significantly more afraid of terrorism than those without signal coverage.

Specifically, Kenyan parents with access to mass media believed that the risk of dying in a terrorist attack was 12 times larger than actual rates. As a result, these parents were more likely to keep their children out of school.

Our analysis also shows that families without media access reacted predominantly to attacks close to their homes. However, families with access to media kept their children out of school in response to terrorist attacks happening more than 100 kilometres away.

This suggests that media coverage plays a crucial role in stoking fears and keeping children out of school.

To investigate the long-term impact of missing school on lifetime earnings, we estimated a model of how parents chose whether to keep their children at home, send them to school or have them work outside the household.

We found that the decline in school enrolment led to decreased earnings later in life. This decrease was about three times as pronounced if parents had access to mass media. Overall, sensational media coverage of terrorist events reduced children’s incomes in their later life by around 25% of a year’s income.

The study is informative for the Kenyan government and other similar African nations striving to boost school attendance and the quality of education for young people.

The results show that access to media has significantly increased the fear of terrorism in the country. This has had a significant ripple effect on younger generations who are being kept out of school and will suffer financially later in life.

Our finding that distance to school increases the negative effect of a terrorist attack suggests that reliable and secure transport to school is important. Providing transport would likely make a considerable difference to children’s education, and Kenya’s long-term growth and development.

Governments could counteract over-responses with informational campaigns. Informing parents of the actual risks posed by terrorist attacks could counteract the fears stoked by the media, resulting in higher school enrolments.

Post a comment
WATCH: The latest videos from the Star
by Marco Alfano and Joseph-Simon Goerlach
News
25 November 2022 - 16:06
Read The E-Paper